Christy Clark says her rivals in the race to become B.C.'s next Liberal premier cannot credibly feed the voter hunger for change because they were on hand for the policies that have eroded government popularity.

"I am the only candidate that isn't more of the same from the last few years of government," Ms. Clark told reporters Saturday, following the final debate of the Liberal leadership race.

The former deputy premier, returning to politics after six years that have recently seen her work as a radio talk show host, has touted the point as part of her bid to succeed Premier Gordon Campbell.

But she sharpened her argument in remarks to reporters after the taping of the Shaw TV-sponsored debate, which airs Sunday, Feb. 20 at 5 p.m.

"If we don't offer change as BC Liberals in this next provincial election, the NDP are going to offer change," said Ms. Clark.

During her brief closing statement, Ms. Clark used the word "change" 11 times to make her point.

Due to the order of scrums after the debate, only George Abbott, the former education minister, and former attorney general Mike de Jong had a chance to respond.

Mr. Abbott said he had a record of proposing change in his career, but did not outline any specific examples.

Mr. de Jong noted he had released his campaign donation records during the leadership race but Ms. Clark was holding off doing so until the end of the campaign.

"She missed a chance to highlight change by agreeing to immediately disclose her expenses," said Mr. de Jong.

The debate largely covered themes and issues that have arisen during the competition to win the support of about 90,000 B.C. Liberals, who vote Feb. 26 on the next leader.

Mr. Abbott and Ms. Clark sparred over Ms. Clark's proposals to hold the growth of health-care funding to the rate of economic growth.

And Mr. Falcon pointedly asked Ms. Clark about committing to seeking a seat in the next election.

Ms. Clark, noting she joined the party at 14 and served as an MLA for nine years including four in government, repeated her stand that she was the only candidate who did not have the fallback option of an MLA's salary should she lose so could not make that commitment.

But she suggested she might consider a return to politics if she loses to a new leader, who had the right answers to her questions about a commitment to such change as broader public consultation before tax changes and the granting of new latitude to MLAs before deciding whether to run.

"If the answers to those questions are the right ones and they represent change, then of course, I'd love to talk to them about running in the next election," she said.

Unity during the debate included an agreement not to roll back increases in Medical Service Premiums or restrain proposed hikes in BC Hydro rates.

Ms. Clark suggested BC Ferries boss David Hahn should look within his operation before seeking major price hikes though Mr. Falcon suggested tough talks with BC Ferries would be a better approach.

Mr. Falcon noted, in the end, that there is more agreement than disagreement among the four candidates remaining in the race after two dropped out earlier this week.

"This is a race not for voters at large, but for BC Liberal members, and obviously there is going to be a fair bit of agreement because we all are on the same team," he told reporters.

"At the end of the day, we're all on the same team and we're all in general agreement on the broad direction we want to see government go. If you want to see real debate and differential, it will be between ourselves and the NDP." 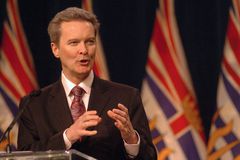 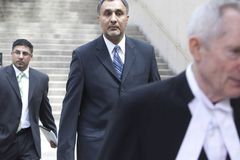 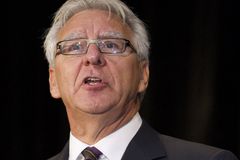 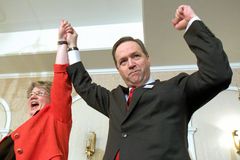 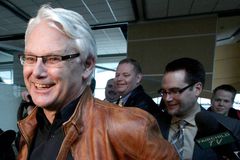