Operations at a sawmill in British Columbia's Interior, temporarily evacuated over the summer because of massive wildfires, has now been shut down following a fire inside the mill.

For an industry already struggling with the Canada-U.S. softwood lumber dispute, destruction by the mountain pine beetle and last summer's massive wildfires, the shutdown of Tolko Industries' Lakeview Mill in Williams Lake is just one more blow for the province's forestry-dependent communities.

Structural engineers aim to be able to get into the mill site on Monday to assess the damage, but the mill, which employs 170 workers, was already facing an uncertain future as it processed wood salvaged from forest fires that are still smouldering in some parts of B.C.

"I don't know how much more the people of Williams Lake can handle," Forests Minister Doug Donaldson said on Sunday.

Donna Barnett, BC Liberal MLA for Cariboo-Chilcotin, visited the mill on Sunday. "They don't know how much damage has been done – they are still putting water on it – but it's extensive."

She said her community has already been hard-hit by the wildfires, and there is anxiety about finding enough timber to keep the forestry sector afloat.

"My riding, just about the whole thing was on fire at one point or another – there is so much burnt wood out there." She said the timber supply was already shrinking because of the forests killed by mountain pine beetle, and it is expected any salvageable wood from the fires will have to be harvested quickly before it loses all value.

"It hasn't hit home yet, on the long-term outcome of what the forest industry will look like one or two years down the road," Ms. Barnett said.

This year was deemed to be the province's worst wildfire season on record, scorching the equivalent of the entire year's timber harvest in the province's Interior.

Diane Nicholls, B.C.'s chief forester, is currently assessing whether the amount of timber available for harvest in the Interior will have to be reduced in the future.

"When disaster strikes to that magnitude, she is compelled to have a look it," Mr. Donaldson told reporters Sunday.

The Forests Minister said his government found ways to get forest-dependent communities back to work after the disruptions of the summer, by using existing cutting permits to get at salvageable timber.

"Wood is flowing to the mills from the timber," Mr. Donaldson told reporters.

The government has spent more than $560-million in direct fire-fighting costs as a result of this fire season, but Mr. Donaldson said the price of the damage will continue to mount.

Forestry staff are still assessing the damage – impossible in some areas where fires continue to burn. He said some of the timber still can be cut, but there are places where the fires left nothing behind.

"There are some areas where it is nothing but white ash," he said. "It's a public safety concern. … Where the trees burned down, there's not even a stump, and someone walking could fall in. It's almost like quick sand."

That degree of devastation brings another set of concerns about what will happen in the spring when the freshet – melting snow and ice – swells rivers and streams.

"There is nothing to hold the water back," he said. Forestry crews are already replanting seedlings to restore vegetation to vulnerable areas, "but there are lots of areas where that will be a concern – whether it is going to wash out roads, culverts or increased sediment in streams."

B.C.'s forest industry has been through a series of contractions, in part owing to the toll of the mountain pine beetle epidemic which has killed half of the total volume of commercial lodgepole pine in the province since the 1990s.

Moments before speaking to reporters, Mr. Donaldson was inside a convention hall where BC NDP delegates voted to direct his government to improve timber supply to ensure mills are operating at full capacity.

The resolution – drafted by members of Mr. Donaldson's own NDP Stikine constituency – took aim at raw log exports, which increased under the former BC Liberal government's term of office. But, amid all the other challenges in the forest industry, Mr. Donaldson said change will take time. 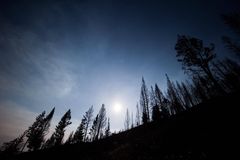 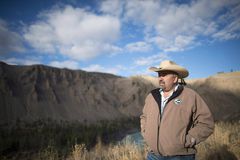