So, after all that time, when did the ministry's delegate finally hand down an assessment that Mr. Lai is not in danger of mistreatment at the hands of Chinese authorities?

Why, a mere nine days before Foreign Affairs Minister John Baird arrives in China to bolster relations between the two countries. Mr. Lai was quickly arrested and earmarked for speedy delivery back to his homeland.

If the courts hadn't subsequently stayed Mr. Lai's deportation until next Thursday, maybe he and Mr. Baird could have taken the same plane to Beijing.

At any rate, fancy that. All this frenetic activity on a case that had been dormant since 2007 suddenly erupting on the virtual eve of the minister's visit to China, which has long thirsted for Mr. Lai's return.

Already, the People's Republic is smiling. "China has noticed the relevant progress of the Canadian government's risk assessment in the case of Lai Changxing," Foreign Ministry spokesman Hong Lei told reporters on Thursday.

The Reuters report on the ministry's briefing added: "The case is likely to arise during [Mr. Baird's]July 16-20 visit to China, where he is trying to expand Canada's reach."

Speaking of John Baird, our rookie Foreign Affairs Minister – in the year of our Lord 2011, after years of stunning economic growth in China – says he "gets it" that China is important to Canada's future prosperity. Whew. Good on you, Minister.

But "getting it" likely means also not doing or saying anything significant about the sad lack of basic human rights in Communist-ruled China.

Yes, behind closed doors, Mr. Baird will no doubt trot out the usual, pro-forma "concerns" about human rights to Chinese officials, who will try to hide their smirks with dutiful nods. It's a long-established ritual for Western government visitors, signifying nothing.

Mr. Baird may even make a public speech with some pointed remarks about human rights. But will he touch deeply on China's lack of a free press, its rigidly controlled justice system that will try Mr. Lai, or the country's regular jailing of citizens for organizing petitions the government doesn't like?

Like most of his predecessors in the portfolio, Mr. Baird reserves his tough talk for crackpot dictatorships like Myanmar and North Korea, which can't harm a hair of Canada's chinny chin chin and couldn't care less.

I'm sure the minister's one-month boycott of UN disarmament talks because of North Korea's involvement really had them cowering in Pyongyang.

When dealing with China, the Tories have come to embrace the same realpolitik as everyone else.

No more Stephen Harper vowing not to sell out human rights for "the almighty dollar." No more Jason Kenney lavishing praise on the Dalai Lama and private meetings between His Holiness and Mr. Harper. No more sympathy for Taiwan. No more snubs of events like the Beijing Summer Olympics.

Those principled positions are all so yesterday.

For years, "experts," business leaders and deal-driven politicians from the West have preached the convenient mantra: engagement, not criticism, is the way to improve human rights in China.

Meanwhile, China gets more and more powerful, the West weaker and weaker, and the human-rights situation these days is worse, not better.

SFU biologists studying a particular species of stick bug claim to have determined that the last time a couple of the insects got it on was 1.5 million years ago, apparently after repeated listening to Bug-eyed Lady of the Lowlands. Or was it She Makes Love Just Like a Stick Bug.

Okay, I made the last bit up, but something must have gone terribly wrong that night in Flintstone land. Ever since, according to the biologists, these estranged bugs have reproduced by cloning, instead of … well, you know.

According to one of the fun-loving biologists, cloning is actually more efficient than … well, you know.

Fie, say I. All these stick bugs need are some TV ads showing other insects prancing and dancing hysterically on their way to work and a suggestion they talk to their doctor. Guaranteed to put an end to cloning.

In the news biz, they call summer the silly season. Now you know why. Good night, Mrs. Calabash, wherever you are. 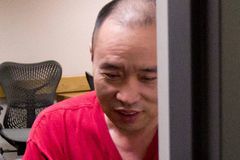