When Premier Christy Clark dismissed opponents of resource developments in B.C. as the "forces of no," she singled out for specific criticism those aligned against the proposed LNG facility at Lelu Island, near Prince Rupert.

The Pacific Northwest LNG proposal is widely seen as the front-runner among several such proposed projects and Ms. Clark, who in the last election campaigned on a promised liquefied natural gas bonanza, is clearly hoping to see it proceed before facing re-election next year.

In January, she took on the "kind of a ragtag group of people" trying to stop the Lelu Island project.

"I'm not sure what science the forces of no bring together up there except that it's not really about the science," she said. "It's just about trying to say no."

Last week, however, more than 130 Canadian and international scientists joined the no side, sending an open letter to Minister of Environment and Climate Change, Catherine McKenna. The letter says the federal environmental assessment of the project "is scientifically flawed and represents an insufficient base for decision-making."

Among the signatories, the forces of no counted 81 PhDs.

"The location of this terminal poses an unimaginable risk to our local economy and our livelihoods," they stated, saying the project threatens the Skeena River's wild salmon run, which contributes $110-million annually to the regional economy.

The "forces of no" it appears, are not uninformed rabble-rousers, but knowledgeable scientists and small-business operators.

Perhaps more of a problem for Ms. Clark than the growing credibility of her opponents are the findings of the CEAA itself.

"The project would result in 5.28 million tonnes of CO2 per year … a marked increase of greenhouse gas emissions both at the provincial (8.5 per cent increase) and national (0.75 per cent increase) level," the CEAA draft report states. "The agency concludes that the project is likely to cause significant adverse environmental effects as a result of greenhouse gas emissions."

Matt Horne, associate director of the Pembina Institute and a member of the B.C. government's advisory Climate Leadership Team, underscored the issue in a letter released Friday.

"I agree that the GHG emissions from the project and the associated upstream activity are significant and represent material challenges to B.C. and Canada being able to meet their climate change targets," he wrote.

Chris Tollefson, director of the University of Victoria's Environmental Law Centre, said Mr. Horne's analysis is significant because it shows that if the LNG plant is built, neither B.C. nor Canada will likely meet GHG targets. Instead of going down, as Prime Minister Justin Trudeau promised in Paris and Washington, GHG emissions would climb.

"The numbers are staggering," Mr. Tollefson said of the GHG volumes tied to the LNG project. "It could be the biggest single point source emitter of greenhouse gas in the country."

Mr. Tollefson says GHG emissions put Ottawa in a tough position, because the government has committed to meeting GHG targets.

"The only way the project can go ahead is if cabinet decides that under CEAA those effects can be justified in the circumstances. And so basically we're into what I think is the biggest test for this [federal] government. Which is, are they going to be serious about Paris or are they going to bend in the political wind?" Mr. Tollefson said.

Put another way, will Ms. McKenna and Mr. Trudeau side with "the forces of no"?

If they do, Ms. Clark will look as if she tried to push the LNG project through to bully her opponents. And if the federal government does side with her, ignoring the CEAA's caution, it will face both governments with the tough problem of trying to explain how GHG targets can be met. 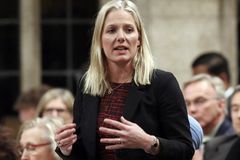