Two grizzly bears that caused a small B.C. town on a coastal island to go into partial lockdown have been captured alive and will be released in a wilderness area on the mainland.

Last week, the two bears swam to 4.5-square-kilometre Cormorant Island, where about 1,500 people live in the community of Alert Bay. After the bears were seen wandering through the streets, officials urged people to stay off local hiking trails, to escort their children to and from school and to stay indoors as much as possible. Schools cancelled outside play.

Gordon Hitchcock, an inspector with the B.C. Conservation Officers Service, said Thursday it's a relief the bears were finally trapped.

"Last night the first bear, the larger of the two siblings, was caught in a foot snare at last light. And then the smaller of the two wasn't captured until first thing this morning, so both are in our custody, so to speak," Mr. Hitchcock said. "They will be ear-tagged and [have] DNA samples taken from them, and then they are going to be packaged up and slung [under a helicopter] to the mainland coast [for release] in what we believe is their home range in one of the estuaries."

Grizzly bears usually don't swim out to the islands along the B.C. coast and had never been seen before in Alert Bay.

Mr. Hitchcock said given the confines of the small island, which lies in Queen Charlotte Strait about 450 kms north of Victoria, there was growing concern the bears would eventually come into conflict with humans.

"It was a bit of stress as days went by on a fairly populated island like that, and the community was getting pretty weary … so I think [the capture] was timely," he said.

After the first bear was caught in a snare, the second was caught in a baited live trap, where a gate slammed shut after the animal entered a cage. Neither animal was injured in the process.

Mr. Hitchcock said the bears would be sedated for the helicopter ride and hopefully will establish a home range where they are released.

Justin Beadle, chief administrative officer for the village, said the community is happy the visit ended without any harm coming to either the grizzlies or people.

"It's excellent news," he said of the capture.

Mr. Beadle said people were excited when the bears first showed up, but anxiety grew when the animals settled in.

"The first few days it was an exciting, curious experience, but after a while, when people have to stay inside so much and can't walk their dogs, and kids can't go to and from school on their own, it does start to become taxing," he said. "Some residents did observe that the bears were becoming much more comfortable. When they initially arrived, they were quite skittish, but as of yesterday they were very comfortable in peoples' yards, walking around underneath decks while people were standing there watching them, climbing up in trees and eating lots of plums."

In a bulletin posted Wednesday, the village urged people to be cautious.

"Do not seek out or attempt to interact with the bears. Pick all fruit that might be growing on trees in your yard and remove attractants (garbage, fishing gear, etc.) from the outside of your home," it stated. "If you are walking or working outside your home, make lots of noise so that the bears stay away."

Mr. Beadle said some people posted photos on Facebook of the bears ambling down a residential street and one driver reported nearly striking one that ran across the road in front of his truck.

He said that "considering their behaviour over the last couple of days and their comfortability around people," it was only a matter of time before either a bear or a person got hurt.

While grizzlies are rarely seen on coastal islands, preferring instead to stick to the mountainous mainland, they have been expanding their range in recent years.

A 2014 study by Christina Service, a University of Victoria PhD candidate, found that grizzlies had spread from the mainland coast to 10 islands on B.C.'s mid-coast. The Cormorant Island incident shows that movement has moved south.

Dr. Chris Darimont, Hakai-Raincoast Conservation Scholar at UVic, said it isn't known why the bears are moving, but it could be related to a shortage of salmon in rivers on the mainland. 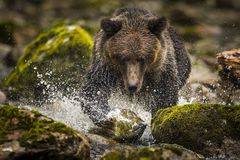 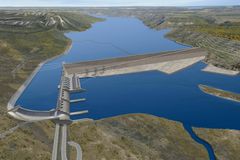 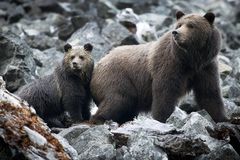