A jovial doctor named Andrew walks into Buckstop and takes a seat at the bar. He is a regular here and has dropped by to celebrate the sale of his condominium.

"A round for everyone!" he says to restaurant owner Fiona Grieve.

She turns to me, "What would you like?" Really? I've only ever seen this happen on TV.

Buckstop is more than just a great Southern barbecue saloon. It's a friendly neighbourhood hangout where everyone, if they don't know your name, at least remembers your face.

"How was your birthday?" Ms. Grieve, a long-time server who squirrelled away her tips to build her own business, asks on my second visit. She didn't even serve me the first time.

The narrow 30-seat room isn't remarkably handsome. It's decked in dark wood, humble Mason-jar candleholders and the standard hunting motifs, including a pointy deer-antler chandelier in the front window.

But the joint's immensely hospitable vibe explains why it has amassed what Ms. Grieve calls "a loyal army of awesome regulars" since quietly opening without any advertising nearly 12 months ago.

Of course, it helps that the smoky, home-style fare is cooked with pride and care. Chef Henry Besser Rosenberg appeared on Buckstop's doorstep after reading about the restaurant in an online magazine. "If I can't work here, I'm moving back to Ottawa," the former commissary cook for Re-Up BBQ pleaded.

"He took control and has been the heart and soul of this kitchen ever since," Ms. Grieve explains, leaning over the bar with a frothy bourbon namesake cocktail, courtesy of Andrew, fizzed up with house-brewed ginger ale. Self-taught, the proprietor is an ace bartender.

Mr. Besser Rosenberg replaced the original chef and expanded the menu to include brunch, happy hour snacks, a tantalizing array of West Coast-inspired small plates and the best barbecue he can muster out of an electric Cookshack smoker supplemented with hickory chips (local bylaws prevent indoor kitchens from using all-hardwood fire).

St. Louis pork ribs are dry-rubbed Memphis style and slow-cooked for three to four hours until they achieve a crispy char and succulent tenderness without falling off the bone (a good sign).

Big beefy back ribs are treated with a slightly spicy Texas-style rub and cooked for five to seven hours at about 225 F (107 C) degrees. Like the pork ribs, they have a nice crusty bark, which indicates that the chef is using the correct amount of wood, heat and salt.

You're never going to get trophy-winning brisket out of an electric smoker. Without hardwood, the beef breast isn't permeated with the magical vapour that gives championship barbecue its telltale smoke ring. But this brisket, with its blackened edges, jiggling fat cap and meltingly soft marbling, is pretty darn good.

The pulled pork is less impressive. It's the only meat that's served sauced and the kitchen really slathers the sweet stickiness on heavy. The chef explains that he originally served it drier (as it should be), but received so many complaints he bowed to customer demand (admirable).

The first time I visited, it was Saturday night and the place was slammed. The pulled pork was stiff and hard, almost fossilized. What went wrong? Was it reheated too many times? "Yeah, something like that," the chef mumbles over the phone.

On the second visit, the pork was much more tender with a toothsome chew. I think it helps that Buckstop thickly pulls its butt into fat strands. If it's too fine and silky – or overcooked – the meat can get mushy and watery and end up tasting like collagen-blown cardboard.

The best way to eat here is to go with a group and order the half stop ($55) or full stop ($95) barbecue. In addition to the two types of ribs, brisket and pulled pork, the platters include honey-orange brined chicken drumsticks (finished in the oven to give them a crispy skin), dense cornbread with honey butter, hush puppies (deep-fried cornbread doughnuts laced with cinnamon), superb sweet-and-sour coleslaw, salty fries and navy beans perfectly balanced with smoky bacon, sweet ketchup and tangy barbecue sauce (all made in-house).

"Want some of our signature hot sauce with that?" I'm back at the bar for my second visit to try some of the smaller plates, each of which is prepared with its own smoky component. Tonight it's hearty cheddar mac 'n' cheese blended with tons of bacon and just the right amount of jalapeno. Oddly enough, it's the small side salad with smoked beets, candied walnuts, goat cheese and mandarin vinaigrette that I devour first.

I take the barbecued buttermilk calamari to go. I'm skeptical about this dish, tossed in a tangy, onion-thickened sauce and dressed with fresh cilantro and diced mango. But it rocks, even when eaten cold the next day.

"I'll be back," I shout to Ms. Grieve as I walk out the door. And I mean it. Sure, it helps that I live only a few blocks away and they serve $4 tequila shots on Tuesday nights. (The daily drink specials are quite amazing.)

But what I really love about Buckstop: This is a Gastown-style bar that's even cooler because it's not.

At this chocolate tasting, notes of raisin mix with hints of sarcasm
April 11, 2014 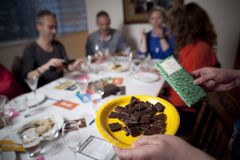 Review
A corner of Mexico in Whistler puts a twist on traditional fare
April 4, 2014 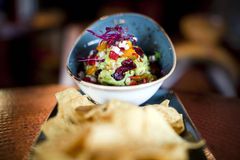 Ignore the decor and focus on the fabulous food
March 28, 2014 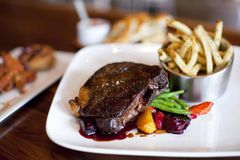