An off-duty RCMP officer who left the scene of an accident minutes after his Jeep struck and killed a motorcycle driver, went home and had two quick shots of vodka before returning, because his police training taught him that was a foolproof way to defeat a breathalyzer test, the Crown has alleged.

Prosecutor Kris Pechet made the claim in the Supreme Court of British Columbia on Monday at the opening of an obstruction of justice case against RCMP Cpl. Benjamin (Monty) Robinson.

Cpl. Robinson, 42, who has pleaded not guilty, is not new to the headlines. He was the senior officer on duty in October, 2007, when Robert Dziekanski, a visitor from Poland, died after being shot by a police taser at Vancouver International Airport. He and the other three officers are facing perjury charges flowing from the investigation of Mr. Dziekanski's death. That trial starts in April.

One year after the airport incident, which became world news, Cpl. Robinson was driving home from a Halloween party at about 10 p.m., with two of his three young children, when his Jeep struck a motorcycle driven by Orion Hutchinson, 21.

Mr. Pechet told court that while people in the residential neighbourhood ran to assist, with one woman trying to revive the fatally injured motorcyclist, Cpl. Robinson handed his driver's licence to a passerby, and hurried to his nearby home on foot, with his children in tow.

Cpl. Robinson told witnesses he wanted to get his kids, a 7-year-old boy and 12-year-old girl, away from the horrific accident scene, Mr. Pechet said – but his real reason was to construct a cover for the drinking he'd done earlier that evening.

Mr. Pechet said the Crown will produce witnesses who will testify that Cpl. Robinson took an RCMP data training course in 2005 in which he was taught, among other things, that people who have an accident while driving after drinking can defeat an impaired charge if they have something to drink after the accident, and before they are tested by police.

And by leaving their driver's licence at the accident scene, they can escape a charge of leaving the scene of an accident.

Mr. Pechet said he will prove that Cpl. Robinson learned that lesson well, and that at a Christmas party in 2007, he gave advice to others on how to beat a drinking and driving charge.

Cpl. Robinson told fellow partiers to have a bottle of mouthwash with them in case they got stopped at a roadblock, Mr. Pechet told the court, and if they were in an accident, they should leave their licence at the scene and go home, or to a nearby bar, and pound back a couple of drinks. Then return to the accident scene.

And that's exactly what Cpl. Robinson did on the night of Oct. 25, 2008, claimed Mr. Pechet, as Judith Hutchinson, the mother of the young man who died that night, sobbed in the public gallery while her friends wrapped their arms around her for support.

Outside court, Ms. Hutchinson, her hands trembling and her voice choked with emotion, read a brief statement to the media.

"We'd just like to say that it is incomprehensible to us and an outrage that it has taken almost three-and-a-half years to come to this point, during which time this person has continued to receive full pay and benefits, while we have suffered. Regardless of the outcome nothing can make our loss less painful," she said.

"We fervently hope that the outcome of the trial ensures that this individual is not permitted to continue in a position of public trust, because given his track record we feel that that would be an utter and complete travesty," said Ms. Hutchinson, who was in tears throughout the opening hours of the case.

The court was advised that defence lawyer David Crossin has presented an application to disallow as evidence key statements Cpl. Robinson made to a police officer at the accident scene in Delta. But that matter has not yet been argued.

The trial, which is before a judge alone, is to last eight days. It is being heard by Madam Justice Janice Dillon at B.C. Supreme Court, in New Westminster. 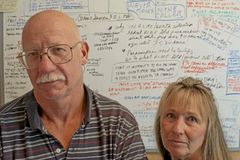