A decision by the Department of Fisheries and Oceans to drop charges against a fish farming company that caused the drowning deaths of 65 sea lions is being criticized by a leading environmental organization.

"The thing that is really disappointing is that there's no mention of how [fish-farm practices] will actually improve because of this," said Ruby Berry, salmon aquaculture campaign director for the Georgia Strait Alliance.

But a company spokesman says Grieg Seafood BC Ltd. has learned its lesson, and has implemented new methods to safely keep predators out of the ocean pens where salmon are raised.

Grieg Seafood, an international company that operates 21 fish farms in British Columbia, was charged last year with nine counts of unlawfully destroying marine mammals. The charges stemmed from a series of incidents in late 2009 and early 2010, in which the sea lions and four seals became entangled in nets at three farms, near Gold River on the west coast of Vancouver Island.

The company entered not guilty pleas, but before the matter went to trial, DFO and Grieg Seafood agreed to go through a restorative-justice process. Under that approach, the company made presentations to a forum of local community representatives, government and company officials and some outside organizations, including the Vancouver Aquarium.

The outcome was that all charges were dropped and Grieg Seafood agreed to donate $90,000 to the Nootka Sound Watershed Society for salmon stream restoration. The company also gave $5,000 to the Great Canadian Shoreline Cleanup campaign and $5,000 to fund a workshop on sea-lion and seal management.

Ms. Berry said those are all worthy causes, but she doesn't see how the donations will help keep sea lions and seals from getting fatally tangled in fish-farm nets in the future.

"What we are seeing from DFO are decisions that continually allow [fish farms] to keep doing the same things. Sea lions are predators of salmon and they will keep going after these farmed fish, as long as those fish are in the water," she said.

"The fish farming industry has been telling us for 25 years they have solved the problem [of accidental seal and sea-lion deaths] but it just keeps happening," said Ms. Berry.

She was also critical of the restorative-justice process, saying the forum wasn't balanced because it didn't include any representatives from environmental groups.

"This whole process was a surprise to us," she said.

DFO did not respond to a request for comment.

But Stewart Hawthorn, managing director of Grieg Seafood BC Ltd., said he felt the process was fair.

"We agree this [drowning incident] shouldn't have happened. We are very sorry it happened and we are saddened by it as well – although I am pleased that the charges, in the end, have been dropped," he said.

Mr. Hawthorn said because of a confidentiality agreement he can't discuss what was said at the restorative-justice forum, but the company did outline measures it has taken to prevent similar accidents.

He said there was an unprecedented number of sea lions around the farms when the drownings occurred, with "hundreds and probably into the thousands" in the area.

Mr. Hawthorn said no animals had drowned at Grieg Seafood farms before that incident. For the first time, he said, sea lions began to swim under the predator nets draped along the sides of the farms. In trying to enter the pens from underneath, the animals got trapped and drowned.

He said as a result of the incident, Grieg Seafood began placing predator control nets deeper, using stronger material and securing them with heavier weights.

"It's working," he said of the new methods. But he added that in the past two years, four seals or sea lions have drowned in farm nets.

"It never ends," he said of efforts to devise safe predator controls. "We are always seeing what else we can do to improve." 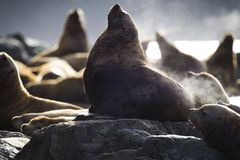 Deadly European salmon virus found in Pacific stock
October 17, 2011
B.C. to lift moratorium on allowing new fish farms
September 13, 2002
Follow Mark Hume on Twitter @markhumeglobe
Report an error Editorial code of conduct
Due to technical reasons, we have temporarily removed commenting from our articles. We hope to have this fixed soon. Thank you for your patience. If you are looking to give feedback on our new site, please send it along to feedback@globeandmail.com. If you want to write a letter to the editor, please forward to letters@globeandmail.com.
Comments