After a heavy day of policy discussions about housing affordability, energy conservation and the importance of a robust and free media, municipal politicians were invited Wednesday evening to wind down and network with their colleagues from across the province at several receptions.

Like most conventions, the Union of BC Municipalities gathering relies on sponsors to host its professional and social events. The sponsors include groups large and small – law firms, the Canadian Union of Public Employees, the Province of British Columbia, Shaw Communications. On Wednesday evening, the Chinese consulate played host to a reception, the only foreign government to do so.

The consulate's hospitality has raised the eyebrows of China watchers, though some municipal politicians scoffed at any suggestion of impropriety, noting the consulate has hosted the reception for the past six years.

Josh Gordon, assistant professor at the School of Public Policy at Simon Fraser University, said the reception should raise concerns. "Governments don't generally just do these kinds of things out of the kindness of their hearts, so clearly there is some kind of agenda. In pursuit of what objectives is hard to say." Prof. Gordon said in an e-mail.

Kerry Jang, a Vancouver councillor and the chair of UBCM convention committee, argued the reception is not a gift, but an occasion for municipalities and cities to establish economic ties with China.

He noted that smaller communities don't have the budgets to allow councillors to go on trade missions, so the reception is a low-cost way of forming connections. "It's just a way of helping municipalities do economic development," he said.

Mr. Jang said the Chinese government approached UBCM a few years ago to express their interests in hosting a reception. "They have done it a couple of years now, in which they get to know [various] councillors and what opportunities exist. Nothing sinister, nothing bad."

Mr. Jang added that anyone who wants to make a contribution to UBCM needs to do it through the their trade show, but UBCM refuses contributions from groups that are "overly or clearly political."

Richmond Mayor Malcolm Brodie also said he saw no problems with the reception.

"I don't agree with the concern. There are many many different groups [and] organizations will host receptions at UBCM," said Mr. Brodie. "Officials from foreign governments will invite politicians from every level to various events because it's important to keep those networks and channels open."

However, Carol Day, a councillor in Richmond, said she would not be attending the reception.

"The Chinese consulate and Chinese government have tried to influence politicians," she said in an e-mail. But she added: "I feel it is more of an issue for MLAs and MPs who have the ability to change BC or Canadian policies that directly affect their ability to make foreign investments in Canada."

Richard Fadden, director of the Canadian Security Intelligence Service between 2009 and 2013, told Postmedia last month that Canadian politicians at all levels and the private sector "should treat our relations with China and Chinese companies differently than we do with companies from other countries."

Mr. Fadden, in a 2010 televised interview before the G20 meeting in Toronto, spoke about municipal and provincial politicians who "are under, at least, the general influence of a foreign government." He did not name anyone, but many observers interpreted the comments as a veiled criticism of China.

No one from the Chinese consulate returned a request for comment.

Michael Byers, who holds the Canada Research Chair in global politics and international law at the University of British Columbia, said the reception itself is not a problem since it is open to all convention delegates and the benefits provided to the municipal politicians are negligible, namely free drinks and canapés.

But he noted there could be problems if other hidden benefits are offered at the event.

"Problems arise if Canadian politicians are provided benefits that could serve as inducements: free trips to China, significant gifts, promises of assistance with re-election campaigns, and other such things," Prof. Byers said in an e-mail.

Mr. Jang said that although the Chinese government is hosting a reception, it doesn't make any direct contribution to UBCM.

Yves Tiberghien, director of the Institute of Asian Research at the University of British Columbia, was invited by the provincial government to give a speech at last year's reception hosted by the Chinese Consulate-General.

He said he didn't witness any behaviour of concern and the event was mostly a networking goodwill affair. He acknowledged that it is "unique" that the Chinese government does it with B.C.'s municipalities, but he said other foreign countries also host similar diplomatic events.

According to the Chinese Consulate-General's website, more than 500 local officials attended last year's reception including MLAs, cities' mayors and councillors.

Consul-General Liu Fei delivered a speech last year noting that the China-Canada strategic partnership will promote peace, stability and prosperity in Asia-Pacific and the world. She also said China, as B.C.'s second-largest trading partner, expects more interactions and communications with the municipalities.

A recent poll by Angus Reid Institute shows that most Canadians feel skeptical about Chinese investment in Canada. The survey found 50 per cent of Canadians believe Chinese investment in Canada is about equally good and bad, and 35 per cent of them think it's more bad than good. The poll of 1,505 people has a margin of error of plus or minus 2.5 percentage points, 19 times out of 20, Reid said. 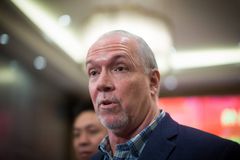