Chilling details emerged on opening day of a high-profile trial involving the execution-style deaths of six men – two of them innocent bystanders – in one of the worst gang-related incidents in British Columbia's history.

The killings of the "Surrey Six," which touched off a bloody gang war across the province that saw scores of shootings, began when a drug trafficker failed to pay a rival gang $100,000 demanded as a show of respect, a courtroom heard for the first time on Monday, nearly six years after the incident took place.

It ended with the deaths not only of four mobsters but of Ed Schellenberg, a 55-year-old fireplace repairman from Abbotsford, B.C., servicing units in pleasant Balmoral Towers, and Chris Mohan, 22, who lived with his parents across the hall from the unit where the killing occurred. For a decade, Mr. Mohan and his family lived on the 14th floor – they only moved to the 15th floor a month before the killings, court heard.

The high number and grisly nature of the subsequent shootings made for tense times on the streets of the Lower Mainland and led to a massive investigation by the RCMP. It involved up to 100 investigators and helped propel the case into even more infamy when it charged four of its own with breach of trust, obstruction of justice and fraud for conduct linked to the investigation.

It also led to questions about B.C.'s drug industry, where the province's gangs fit into the global picture and whether anything could be done to ensure another, similar war won't happen again.

Three men – all members of a gang called the Red Scorpions – are on trial in B.C. Supreme Court in the death of the four gang members and two bystanders. They pleaded not guilty in the case, which is expected to last at least a year and hear from some 100 witnesses.

There have been years of pretrial hearings since the accused were arrested in 2009. "It has been a lengthy process to get to today," Crown spokesperson Samantha Hulme told reporters during a break in the proceedings.

Before dozens of spectators, Crown prosecutor Mark Levitz told Justice Catherine Wedge that Scorpion leader Jamie Bacon – facing a separate trial in the case – leaned on the tenant in the 15th-floor unit to pay $100,000 as acknowledgment of Scorpion dominance of the drug trade.

The target of the Scorpions was 21-year-old Corey Lal, a drug trafficker who kept drugs and cash at the apartment, Mr. Levitz alleged.

When he did not pay, the Scorpions set out to kill him. Hour by hour, from 1:30 p.m. through about 3 p.m., Mr. Levitz laid out the Crown timeline leading to the murders and escape of the accused. They secured a pair of handguns. On the afternoon of Oct. 19, they gathered at a Korean restaurant in the neighbourhood, then in a nearby apartment, court heard.

A Scorpion associate living at the Balmoral provided a security fob so the killers could come and go as they pleased, and the device allowed them easily enter the building and get to the 15th floor, Mr. Levitz said. There they found Mr. Lal, his brother, Michael, 26, as well as 22-year-old Eddie Narong and 19-year-old Ryan Bartolomeo.

Mr. Schellenberg was in the unit working on the fireplace, court heard. Somehow Mr. Mohan ended up in the unit. Using two handguns, the killers allegedly shot their victims in the heads, leaving the bodies in two groups of three. Mr. Mohan was in one group and Mr. Schellenberg in the other, the Crown said.

Mr. Lal was the target. Others, said Mr. Levitz, were killed to ensure there were no witnesses.

As Mr. Mohan's mother, Mr. Schellenberg's family and others listened, Mr. Levitz went into clinical details about the case, which prompted arrests two years after the killings: 19 shots fired; Mr. Schellenberg, in his group of three, lying face down and shot twice in the head; Mr. Mohan, shot twice and among three men lying face up.

Ironically, police had an unrelated surveillance operation underway at the apartment the accused used as a staging area for the attack on Mr. Lal, Mr. Levitz said. Evidence from that surveillance will be part of the Crown case along with material gathered by an undercover operation targeting the Scorpions, DNA evidence, witness testimony and certain admissions from the accused.

Mr. Mohan's mother, Eileen, struggled to describe the experience of sitting through the Crown opening during which crime-scene photos were screened for lawyers in the hearing area. "It's totally very hard, very difficult. I wish I wasn't here and Christopher was here with me, but I have to see this through," she told reporters outside the court. "It's going to be a long haul."

Ms. Mohan said she has not taken vacation for five years to accumulate time so she can attend the trial. She said some of Mr. Levitz's points were new to her. "I'm just bracing for things to come," she said. 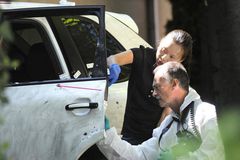 B.C. RCMP sergeant at centre of Surrey Six investigation scandal
May 11, 2018
Surrey Six trial to be relocated to Vancouver
May 11, 2018 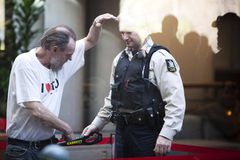