In Vancouver, culture has always taken a back seat to nature's beauty.

But when, within the space of a few days, a venerable theatre company announces it is closing, a historic indie movie house says it will shut down and a public appeal is launched to keep a beloved work of public art from being carted off, there is an uncomfortable question in the coastal air: Is Vancouver becoming a cultural backwater?

The sudden closing of the Vancouver Playhouse Theatre Company last week, after 49 years as a cultural keystone, has sparked this crisis of confidence. Within days, word broke that the historic Ridge Theatre will be shut down – replaced by, what else, condos.

But it is the Playhouse announcement that has sparked the most artistic soul-searching. "To be honest, I felt a huge dismay and a great disappointment and a kind of shame, a kind of embarrassment for my city," said actor Nicola Cavendish, 59, who launched a national career from the Playhouse. "It's not about pointing fingers, but it is about wondering how a city that calls itself a world-class city – why it is we have to fight so hard within the arts, be it dance or symphony, to get the audience to come inside the theatre."

Theatre artist Melanie Karin is more blunt. "It's very rare that you'll get an audience out to a theatre performance that aren't artists or who aren't related to the theatre community in some way."

The result: Artists are giving up on Vancouver's cultural scene. "It's very dead, and it's only getting worse," said Ms. Karin, 25, who joined the exodus from Vancouver in 2010, moving to Ottawa to study dramaturgy. "There's a big drain right now. Most of my friends have moved to Toronto."

Some reject the notion that the death of the Playhouse is an epitaph for Vancouver culture. "It's dangerous to get into a panic mode," said Deb Pickman, who works at the Department of Theatre and Film at the University of British Columbia, and co-founded Shameless Hussy Productions.

Nevertheless, within the past few months, the cultural exodus – helped along by Vancouver's high cost of living – has included high-profile people such as visual artist Sonny Assu (to Montreal), television guru Chris Haddock (New York), and Move: the company artistic director Joshua Beamish (New York). Actor Laara Sadiq left Vancouver for Toronto about a year and a half ago.

"I need to be able to support my family, I need to be able to work," Ms. Sadiq said. "The irony is when the Olympics came to town, millions of dollars were funnelled into arts and culture and we were trucked out proudly as a way of showing the world that Vancouver is indeed a world-class city. Within months of the Olympics leaving town, the repercussions started … trickle down. Really that support was only there for a finite amount of time and then we were expected to pay for that support out of the other pocket.

"So seeing all of that made me think very long and hard about my livelihood and also about how I wanted to live as an artist and what kind of environment I wanted to be in and a move from Vancouver, unfortunately, just seemed to be the only way to go."

The issues that come up repeatedly by Vancouver's cultural ex-pats are work opportunities, affordability and funding. "I have barely received any funding from either the city or the province for the last seven years that the company operated," said Mr. Beamish, 24, a celebrated choreographer. "So it came to a point where I kind of realized what is the point of being here?"

According to figures released last year, per-capita spending on culture by the three levels of government in B.C. combined was the lowest in the country. For Jessie van Rijn, the painful difference in support for the arts goes far beyond the hard numbers of government financing. Ms. van Rijn, 30, said a lot of the young artists she knows are moving east – to Toronto, Montreal, Calgary or Edmonton – or at least talking about it. "The overall temperature of support in those cities is seemingly higher because the residents of those cities are thirsty for those opportunities to experience arts and culture, whereas here in Vancouver … that doesn't seem to be the case."

Ms. van Rijn, the general manager at Carousel Theatre, is also co-producer at Vancouver's Relephant Theatre, which was supposed to mount its 2010 Fringe Festival hit The Exquisite Hour at the Playhouse Recital Hall Series this spring. This huge opportunity for the fledgling company is now very much up in the air, along with God of Carnage, which was supposed to end the Playhouse season (and which opens Thursday night at Manitoba Theatre Centre in Winnipeg).

"It's so strange to me and surreal that the city is supposed to be this culturally dynamic and diverse mecca, and this can happen to its regional theatre company?"

All options being explored to save Vancouver Playhouse Theatre Company
March 12, 2012 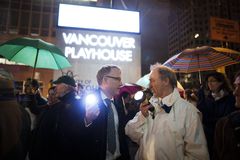 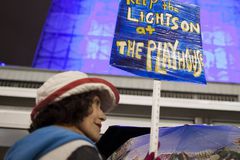 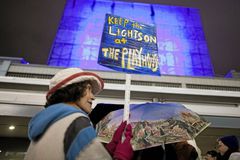