For Lorelei Williams, there is something about this time of year – beautiful things, terrible things. Her cousin Tanya Holyk was born on Dec 8, 1975. On Dec. 9, 2007, Robert Pickton was found guilty on six charges of murder in the deaths of women who had disappeared from Vancouver's Downtown Eastside. Ms. Holyk's remains and clothing were found on his farm.

On Thursday night, almost exactly 10 years to the day later, Ms. Williams was named the winner of Samara Canada's 2017 Everyday Political Citizen award in the over-30 category for her advocacy work related to Canada's missing and murdered Indigenous women and girls – and her fight to end violence against all women.

"It really means a lot, especially because Tanya's birthday's on Dec. 8," says Ms. Williams, 37, who is from Skatin Nation on her mother's side and Sts'ailes on her father's. Then she recalls the timing of the Pickton ruling (the murder charge related to Ms. Holyk was one of those ultimately stayed). "I just find the timing really weird. Like it was meant to be, almost."

Samara is a non-partisan organization that aims to reconnect citizens to politics; this award recognizes political role models in an effort to build a culture of positive politics in this country. Ms. Williams is the women's co-ordinator at the Vancouver Aboriginal Community Policing Centre; she is enrolled in aboriginal justice studies at Vancouver's Native Education College; she volunteers for the Missing and Murdered Indigenous Women Coalition in Vancouver.

Ms. Williams does not just fight: She dances. In April, 2012, while former B.C. attorney-general Wally Oppal was presiding over B.C.'s Missing Women's Commission of Inquiry, Ms. Williams organized a dance at a busy downtown intersection as an act of empowerment. She's not a professional dancer; it started as an individual project and was supposed to be a one-time thing. But, her dance troupe, which she calls Butterflies in Spirit, has since performed more than 100 times, she says.

The motivation for her dancing activism began as a desire to get a photo of her aunt Belinda out in the world. Belinda Williams went missing in 1978, two years before Lorelei was born. She has been told many times that she looks just like her. "I grew up hearing about her all the time," Ms. Williams says during an interview at her college. Belinda Williams' disappearance remains unsolved.

When asked how the dancing could help get the picture out there, Ms. Williams unzips her black hoodie to reveal a t-shirt underneath. One side has a black-and-white photo of Belinda Williams – "Missing" it reads. Next to it is a photo of Tanya Holyk, sitting on a couch near a lamp, smiling, and underneath it: "1975-1996."

"When I started the dance group, I wanted to get my auntie's picture out but to honour my cousin as well. But what I didn't realize was that other family members of missing and murdered Indigenous women and girls would want to join my dance group and represent their missing or murdered loved ones. That's the part I didn't plan," Ms. Williams says.

"They reached out and said they want to wear their family members on their shirts," she continues. "So this group turned into a healing group. Because I didn't realize how powerful dance was until our very first performance."

That performance, blocking off traffic at Georgia and Granville streets, took place only five days after Ms. Williams' mother died – from alcoholism, Ms. Williams says. In addition to deep grief, Ms. Williams had been having anxiety attacks – shaking, nausea. When she started dancing, it all went away.

And when they ended with the Women's Warrior Song – a song that a group of people had sung to her mother on her deathbed – Ms. Williams was too emotional to sing along, but she punched her fist in the air and stood tall as she tried not to break down in tears. Her cousin – Belinda's daughter – captured a photo of that moment. "That's one of my strongest pictures out there."

Of course, she has concerns about the turmoil at the federal inquiry into missing and murdered Indigenous women. "I was a part of fighting for it, and now I'm watching it and I'm like, oh my God; there's so many things happening," she says. "They're trying, but this is a tough issue," she adds, and sighs heavily.

But this week brings something to celebrate and Ms. Williams is able to take a breath and bask in a bit of recognition. In preparation for the award ceremony, Ms. Williams – a single mother to a 12-year-old girl and nine-year-old boy – visited a Vancouver fashion designer's studio. Chloe Angus works with Indigenous artists and is part of the Authentic Indigenous program; she offered to lend Ms. Williams an outfit for the occasion. After helping Ms. Williams choose a sleek, black-and-white Haida tank dress (designed in collaboration with Haida artist Clarence Mills), director of operations Amanda Smith told Ms. Williams: "I have a surprise for you." She draped her in a honeysuckle wrap with Swarovski crystal buttons – and a butterfly design. 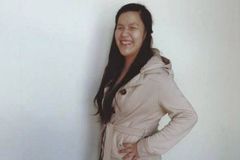 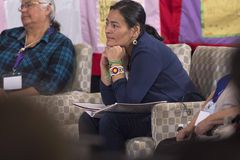