Tom Gill is part of a new generation of politicians in Surrey working with popular Mayor Dianne Watts on transforming the much-maligned suburb into a cosmopolitan urban centre within Metro Vancouver.

But Mr. Gill, who was born in Kamloops and has lived in Surrey for almost 25 years, cannot escape the generation-old rivalries over politics and religion that continue to divide B.C.'s Sikh community.

A lawsuit filed in B.C. Supreme Court has pulled Mr. Gill into a simmering feud that has pitted building contractor Harjit Atwal against a prominent member of the Indo-Canadian community, Radio India station manager Maninder Gill.

In the most recent twist, Mr. Atwal has alleged that the Surrey councillor defamed him in comments that were made to a local journalist after a violent incident last summer outside a wedding at Surrey's Guru Nanak Sikh Temple.

Mr. Atwal was shot during the altercation. Maninder Gill, who is the brother of Tom Gill's mother-in-law, was charged with aggravated assault and five firearms-related charges including discharging a firearm with an intent to wound. A date has not yet been set for the trial.

Mr. Atwal alleges that Tom Gill was quoted in local newspapers as speaking words that were "calculated to disparage [him]in his private life and in his business."

The words were "malicious and were intended to cause serious harm, stress, embarrassment, insult and ridicule," Mr. Atwal alleges. Tom Gill spoke words that he knew were false or did not care if they were true or false, Mr. Atwal also claims. Mr. Gill has not yet responded in court to the allegations.

Mr. Atwal said in an interview he believed Mr. Gill was under pressure from family members to say what he said. Mr. Atwal added that he filed the defamation lawsuit because he believed statements were made that were not true and known to be untrue.

"[Tom Gill was]elected councillor and, when he gives a statement, people are going to say that statement must be truthful," Mr. Atwal said.

Mr. Gill, a Surrey city councillor since 2005, said in an interview he has not been served with notice of the lawsuit, has not seen Mr. Atwal's claims and could not comment on them.

He was not at the temple when the violence broke out and most of what he knew about the incident was from second-hand information, Mr. Gill said. "I did not claim anything that was not public knowledge. … I do not believe I made any comments that were defamatory," Mr. Gill said.

The core issue - the dispute between Mr. Atwal and Maninder Gill - does not involve him, Tom Gill also said. "Unfortunately, I am being involved in this dispute," he said.

Maninder Gill has previously characterized the dispute as a difference over politics and religion that has divided the community for more than 25 years. He has said he has been a target for those who have different views about Punjab, a part of India that some would like to see as a new homeland for Sikhs, called Khalistan. Journalists at Radio India have come under attack after reporting wrongdoings of some who support Khalistan, he also said.

Tensions flared up in May after reports on Radio India that Mr. Atwal and two others considered to be defamatory. In early August, the three men filed a defamation lawsuit against Radio India. Mr. Atwal was shot outside the Sikh temple in late August and Mr. Maninder Gill was charged.

The violence continued into the next month. Police were called to Maninder Gill's house in mid-September after a drive-by shooting where at least 10 shots were fired. On the following day, a talk-show host at Radio India, Gurpreet Singh, received a death threat. The letter writers accused Mr. Singh of being "a traitor" to Sikhs and threatened him and Maninder Gill. 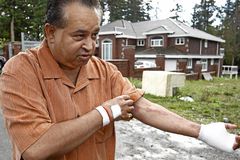 Radio India managing director faces five charges after shooting
April 28, 2018
Follow us on Twitter @GlobeBC Opens in a new window
Report an error Editorial code of conduct
Due to technical reasons, we have temporarily removed commenting from our articles. We hope to have this fixed soon. Thank you for your patience. If you are looking to give feedback on our new site, please send it along to feedback@globeandmail.com. If you want to write a letter to the editor, please forward to letters@globeandmail.com.
Comments are closed