The Globe and Mail's B.C. bureau is spending the summer examining how Vancouver's increasing density is shaping the city and its residents.

In their 1977 study of architecture and social behaviour, researchers Andrew Baum and Stuart Valins housed college students in two types of dormitories: one with a traditional corridor-design layout, with bedrooms next to each other and a shared bathroom on every floor, and another with a suite-style design, with several bedrooms, a bathroom and shared lounge in every suite.

Each design offered a comparable amount of space for every person; the main difference was control over social interactions.

Read more: How strata-housing owners in B.C. can deal with disputes in the face of density

The study, one of the first of its kind, highlighted the impact of the built environment on behaviour. Well-designed density can accommodate a city's growing population while fostering community engagement, decreasing energy costs and even making its residents healthier. But poorly designed density risks creating concrete jungles that feel soulless and claustrophobic.

As growing cities move to densify, experts say it's imperative to consider design at the outset: Successful density is determined not by building height, they say, but how well it is executed.

"I think it's the connection to the ground, and how the building is related to the streets, that really gives people a sense of place," Mr. Yan said.

"A building is only as good as its interface to its urban context."

He cited as an example a four-storey complex in Vancouver's Kitsilano neighbourhood. Ground-floor businesses include a bank, clothing stores and a market whose tables and chairs spill out into a shared courtyard.

"It mixes all these private spaces with public spaces and uses," he said. "That's kind of a neat blend of uses as well as sociability."

Brent Toderian, an urbanism consultant and former chief planner for the City of Vancouver, referenced a comparable layout in the Mount Pleasant area: a building with four storeys, a large and shared rooftop garden, grocery and hardware stores on the ground floor.

"It shows you can integrate big-box retail stores into the city in an urban building with a vibrant and active street edge, and [have] housing above – a vertical, urban 'power centre,'" he said.

It's also an example of how good design can integrate nature and neighbourliness while allowing privacy and respite when sought.

"Bad design does the opposite: It supports poor health, obesity and many deadly preventable diseases, depression and isolation and general low levels of satisfaction and trust. Design doesn't make you happy or sad by itself, but it feeds and supports both."

Anita Molaro, assistant director of urban design at the City of Vancouver, cited Yaletown as one neighbourhood that densified well. Taller towers spaced far enough apart give residents a sense of separation from the buildings across from them, but also allow sunlight to reach the streetscape below.

"It's a combination of all those things, the typology of all that, working on a number of different levels," Ms. Molaro said.

In the neighbourhood, what helps make density succeed is an engaging public-realm interface, she added: places to walk, places to hang out, places to meet friends.

"In a high-density living context, the public spaces become an extension of our living spaces," Ms. Molaro said.

In 2013, the Urban Land Institute and Singapore's Centre for Liveable Cities released a publication on lessons learned from Singapore, which is seen as a high-density, high-livability development model. Among the lessons, the authors emphasized the need to incorporate nature to help "soften the hard edges of a highly built-up cityscape."

With limited horizontal space, planners in Singapore introduced "pervasive greenery," inserting it wherever they could, such as for road dividers, on rooftops and on vertical walls.

"Singapore has managed to create tiers of highly visible greenery from ground level up to the building tops," the publication read, seeing opportunity in the high-rise structures that form the cityscape as a means, rather than an impediment, to introduce more greenery."

It also highlighted the benefit of "activating spaces" through design – building apartment towers around playgrounds, sports courts and other shared spaces, for example, to increase visual access and create zones of ownership. Such design can also make denser communities less vulnerable to crime, the publication said.

According to Statistics Canada figures released earlier this year, Metro Vancouver has the highest population density of all census metropolitan areas (CMA) in the country. Vancouver's CMA grew 6.5 per cent between 2011 and 2016; the City of Vancouver makes up 25.6 per cent of that, Surrey 21 per cent. 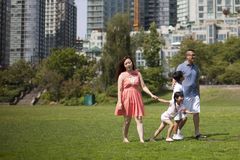 How strata-housing owners in B.C. can deal with disputes in the face of density
August 6, 2017
Follow Andrea Woo on Twitter @andreawoo
Report an error Editorial code of conduct
Due to technical reasons, we have temporarily removed commenting from our articles. We hope to have this fixed soon. Thank you for your patience. If you are looking to give feedback on our new site, please send it along to feedback@globeandmail.com. If you want to write a letter to the editor, please forward to letters@globeandmail.com.
Comments