This week Premier Christy Clark appointed a cadre of communications people to her office. Just filling vacancies, the now well-staffed shop explained. Amid a government hiring freeze, however, it sends a discordant message about her government's priorities.

And the Premier's office is not the only government department that doesn't seem to have read Finance Minister Mike de Jong's latest restraint memo.

Under the rules set down three months ago by Mr. de Jong, hiring will only be approved for areas of critical service or to meet an urgent government priority. Roughly 1,000 people have been hired in that time, mostly front-line personnel such as social workers and probation officers.

Mr. de Jong, who seems to be having trouble saying "no" to his cabinet colleagues, repeated his pledge of fiscal discipline last week during his fiscal update presentation. The deficit forecast has swelled to $1.5-billion this year, and he needs to conjure up $300-million in savings or new revenue in the coming months to meet his target of a balanced budget for the next fiscal year.

"There is virtually no room for any kind of big-time pre-election spending extravaganza," he advised reporters last week.

Jobs Minister Pat Bell didn't get the memo. His shop is spending $11-million this year telling people, again, that his government has a jobs strategy.

Ben Stewart, Minister of Citizens Services, is looking to spend $1.5-million on Family Day celebrations just a few weeks ahead of the next provincial election.

Health Minister Margaret MacDiarmid launched a colorectal cancer screening program last month without a price tag. Why wait for treasury board approval when you have good news to announce? It wouldn't have been hard to cost it out, as the B.C. Cancer Agency had provided a detailed analysis of what the program will look like.

The biggest pre-election spending extravaganza was rolled out by the Premier in September – more than $700-million in capital spending commitments announced at an influential gathering of municipal leaders. The Finance Ministry says it has actually reined in capital spending this year, but here's the trick: Most of Ms. Clark's promises wouldn't be paid for until some time after the next provincial election.

While Mr. de Jong has managed to uncover about $80-million savings since he announced a belt-tightening exercise three months ago, the gap between his government's spending and income continues to widen. He is counting on economic growth to help him table a balanced budget next February, but that alone won't do the job. Critical resource revenues are dropping, and he needs to slow spending accordingly.

And this week, B.C. Auditor-General John Doyle argued the gap is actually much wider than Mr. de Jong is letting on. He calculates that under the rules of GAPP – generally accepted accounting principles – the province is actual more than $2-billion in deficit this year. That puts the credibility of Mr. de Jong's economic plan in doubt.

"I understand the healthy doses of skepticism that occur," Mr. de Jong told reporters last week. "But there is a track record of discipline here … that says we actually respect the fact and are committed to the principle of not spending more of your money than we receive."

Jordan Bateman, the B.C. director of the Canadian Taxpayers Federation, would love to believe that, but he is skeptical. His organization has a standing call for the B.C. government to balance the budget. It's a target that the BC Liberals have missed every year in this current term of office.

"Their restraint message is so far disconnected from their actions, I picture myself in next year's budget lockup and they come up with a balanced budget, what the heck am I supposed to say? This is the question that eroding credibility brings up: Can we believe them?"

The Liberals plan to run on economic credibility in the next election. Which explains, perhaps, the urgent and critical need for more spin doctors in the Premier's office. 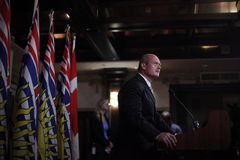 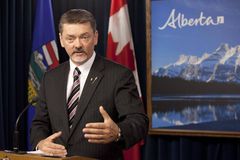