B.C. New Democrats have selected Adrian Dix as their new leader, embracing his agenda to reach out to disaffected voters as the key to defeating Liberal Premier Christy Clark in a provincial election that could come as early as this fall.

The second-term MLA and onetime chief of staff under former NDP premier Glen Clark mapped out an agenda to raise taxes on banks and big corporations to finance social programs - an approach he said will sharply define the party from its Liberal rivals. He narrowly defeated Mike Farnworth, who had offered a more centrist vision for leadership, with 9,772 votes to Mr. Farnworth's 9,095.

In a campaign that was framed around which candidate would have the best chance of ending the NDP's decade-long shutout from government, the MLA for Vancouver-Kingsway said his plan would lure back to the ballot box the 1.4 million B.C. voters who sat out the past provincial election.

Although Mr. Farnworth was regarded as the unity candidate, Mr. Dix promised to offer key roles to his fellow candidates.

"It's time to get down to work and defeat the B.C. Liberals," Mr. Dix told cheering delegates after the final outcome.

After some words about party unity, he swiftly went on the attack on Ms. Clark's record, particularly on education and child protection.

"They are going to try to win the election on personality," he said. He promised a positive - and very different - agenda. "We are going to bring change to British Columbia."

The province is not due for a general election until the spring of 2013, according to the fixed-date election law. However, Ms. Clark, who won her party's leadership in February, has floated the idea of an early vote to earn a mandate from the province.

The three-month-long campaign ended on a night when many B.C. voters were wrapped up in a different contest - the third Stanley Cup playoff game for the hometown Vancouver Canucks. The game was carried on large screens in the convention hall in between rounds of voting.

With just about 800 delegates in the room, most party members - around 18,000 - had cast their ballots in advance polling by telephone or via the Internet.

John Horgan was in third place in the first round, with 4,844 votes, while marijuana activist Dana Larsen garnered just 531 votes.

In his final speech to candidates at Sunday afternoon convention in Vancouver, Mr. Dix urged delegates to opt for his sharper, more ideologically driven agenda. He said the NDP would make a mistake by tacking to the political middle. "We are not going to win the next election by sidling up to the Liberals," he said. But he also won applause for pledging to work with all of his rivals in the next election campaign - regardless of who was chosen leader.

Throughout the campaign, Mr. Farnworth portrayed himself as a centrist who would carry on along the path of former premier Mike Harcourt, reaching out to business and labour alike. "If you are ready for change, I am ready to lead," Mr. Farnworth told delegates.

John Horgan used his address to urge the party to use the leadership contest to reinvigorate the party. "We are going to change the direction for the New Democratic Party," he said.

There were no sharp personal divisions among the candidates during a strangely collegial leadership race in which the rivals spent much of their time expressing their admiration for each other.

The leadership convention opened with a tribute to former leader Carole James, who had led the party through two elections but could not break though the B.C. Liberal hold on power. She urged the party to wrap up the leadership process, united to defeat the Liberals.

The leadership contest was launched after Ms. James, party leader for seven years, was forced out amid a caucus revolt involving just over a third of her 34-member caucus.

The rebellion was led by party stalwart Jenny Kwan, one of three MLAs who quietly approached Ms. James in November, shortly after Gordon Campbell announced he was stepping down as premier and Liberal leader, saying she should do the same.

Ms. James initially dug in and won a decisive vote of her party's governing body, but the dissent continued to split the party. Ms. Kwan finally went public: "I have seen debates stifled, decision-making centralized and individual MLAs marginalized."

On Dec. 6, Ms. James quit as leader, leaving her critics - whom she described as self-serving bullies - with no excuses for further discord.

The so-called Baker's Dozen of 13 NDP MLAs who said the party was stagnating under Ms. James, did field two candidates - Harry Lali and Nicholas Simons, but both dropped out before voting began. They both endorsed Mr. Horgan.

The leadership campaign was a chance for the debt-mired party to renew. It's membership stood at just 12,500 before Ms. James stepped down, and the party was having to lean heavily on its riding associations to repay its 2009 election debts.

With the membership signup drive, the party now has 28,500 members. Tips for a B.C. NDP victory: Project confidence, ditch the laundry list and smile a lot
May 1, 2018 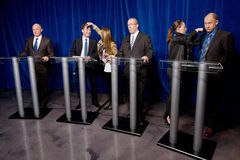 Harcourt's blueprint for NDP success: a leadership style similar to his
May 3, 2018 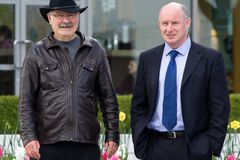 The quiet intellectual goes for results, not histrionics
April 30, 2018 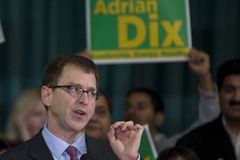