As firefighters worked last weekend to contain a blaze that came dangerously close to properties near West Kelowna, B.C., the helicopter providing air support was grounded because of too many drones in the area.

That same weekend, a drone and a seaplane nearly collided close to Vancouver International Airport, according to an incident report on Transport Canada's website.

As drones become cheaper and more accessible, they're being used for everything from wildlife surveys to pipeline surveillance. But they also have the potential to dangerously clutter up airspace and experts say Canada's regulatory system hasn't caught up to the technology.

"A collision between a drone and an aircraft, or even if the drone got sucked up into the turbines of an aircraft, could be very dangerous," said Ryan Turcot, a provincial fire information officer for BC Wildfire Service. "It endangers our crews and the personnel operating our aircraft."

Dave Kroetsch, the president of drone manufacturer Aeryon Labs in Waterloo, Ont., said the technology exists to give drones automated systems that can sense and avoid collisions with first responders, or stop unwanted entries into restricted airspace. But regulations are at least five years away from mandating manufacturers to implement such systems into their code.

The regulatory environment that's fostered growth in Canada's small-scale commercial drone use has yet to introduce guidelines for a large-scale traffic management system that Mr. Kroetsch and other experts say could be used now to avoid accidents.

Drones are considered aircraft in Canada and are subject to the same airspace restrictions as other planes and helicopters, including near or over military bases, prisons or forest fires and anywhere that may interfere with first responders. Flying unmanned aerial vehicles (UAVs) into restricted airspace is punishable under the Criminal Code and penalties include fines or even jail time.

Under the current regulatory framework, those flying drones for commercial use or using devices weighing more than 35 kilograms must apply for a special permit – called a Special Flight Operations Certificate (SFOC) – from Transport Canada.

The transport regulator issued 296 of those permits in 2014 in British Columbia, a steep rise from just four in 2010.

In October, Federal Transport Minister Lisa Raitt launched a public campaign to help make sure Canadians are flying drones safely. She referred to Transport Canada's safety guidelines, which state that the small aircraft can't be flown higher than 90 metres and must stay within the line of sight of the pilot or someone who is in contact with a pilot.

Diana Cooper, head of drones and robotics at the law firm LaBarge Weinstein LLP, reiterated that the technology is already there to play an important role in safety.

DJI, the manufacturer of the drone that crashed onto the lawn of the White House in January, for example, has since implemented geo-sensing technology in its drones that stops its products from flying into restricted space, including that around the White House, Ms. Cooper said.

"It's actually hard-coded into the technology that you can't enter certain spaces," she said.

NASA is working on a traffic management program for sky highways that would manage drone traffic using geo-sensing to prevent drones from steering outside their lanes, Ms. Cooper said.

She added that Amazon – which is doing its drone testing in B.C. – is also looking at introducing similar traffic management technology for its drone delivery system.

While such systems are not available in Canada, Mr. Kroetsch noted that manufacturers could build drones to detect other aircraft or use GPS systems to sense no-fly zones if Transport Canada made it a hardfast rule.

Liability is another hurdle, Mr. Kroetch said, to expanding Canada's regulatory framework. Under the current rules, the drone operator is liable for any accidents or incidents caused when breaking fly rules. That all changes, he said, when the drone highways expand.

"How do you deal with the liability challenge of some centralized computer scheduling deliveries all over the place, flying a bunch of drones, and somebody wrote a bad line of code and there's now an accident?" he said. "There's a big legal challenge to solve there."

But in Ms. Cooper's view, drones unfairly get a bad rap when it comes to safety and accidents.

"If we look at other technology, we accept a certain level of accidents and we still allow the technology to move forward, like automobiles [and] airplanes," she said. "Nobody's suggesting that we get rid of any of these technologies.

"People want to hold drones up to an impossible safety standard that we are not holding other technologies to," she said. 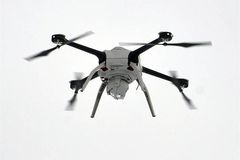 The abortion drone is a high-tech victory for women’s rights
July 2, 2015 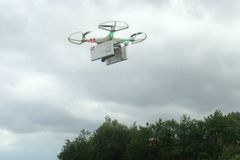 Enrique Iglesias sent to hospital after drone cuts his fingers during concert
May 31, 2015