As synthetic opioids began driving an overdose crisis that was killing hundreds of people in and around Vancouver, the number of charges for dealing hard drugs such as heroin and crystal methamphetamine in the city continued to drop steadily.

Vancouver police say the significant decline in these charges represents the force's shift from rounding up street-level dealers to focus on more sophisticated investigations of higher-level importers and trafficking rings.

Figures provided to The Globe and Mail by the Public Prosecution Service of Canada, the federal agency in charge of illicit-drug cases, show there were fewer than 200 prosecutions for Schedule I drugs – dangerous substances such as heroin, synthetic opioids, cocaine and amphetamines – in Vancouver last fiscal year, down from more than 1,500 eight years earlier.

These charges decreased by a couple hundred each fiscal year until 2012, when prosecutors in British Columbia's most populous city laid 482, which was roughly 50 more than the year before.

But, every year since, this total has decreased by dozens of charges while fatal overdoses have continued to spike across the province because of the introduction of fentanyl into the illicit drug market.

On Tuesday, Vancouver Police Chief Adam Palmer said his force has pivoted from arresting street-level dealers, many of whom are trafficking to feed their own addictions, in favour of targeting the organized crime groups and kingpins that import and distribute the opioids blamed for killing hundreds of people across British Columbia in recent years.

"If you're just going after street-level people that are trafficking, you're not going to get the same bang for your buck," Chief Palmer said at a news conference setting out his force's strategic goals for the next four years.

"Our focus, particularly since about 2014, has really been on the higher-level traffickers."

The force could not provide a breakdown of how many of the 185 charges issued in the 2015 fiscal year involved these "bigger fish," but Chief Palmer pointed to the success of big busts such as Project Tainted.

That operation was launched by Vancouver police and the RCMP in October of 2014 and in the spring of 2015 resulted in 10 people being charged, 58 counts of trafficking and the seizure of approximately $1.4-million worth of drugs, including 29,000 fentanyl pills.

The chief also pointed to the success of Project Trooper, which resulted in six people charged with multiple Schedule I trafficking offences a year ago for running complex network that distributed fentanyl, heroin, cocaine and methamphetamines in the city and into Vancouver Island and Alberta.

"We see some significant amounts of drugs [seized] and get significant sentences for people who are higher up the food chain," he said.

Chief Palmer said the department reorganized itself two years ago to better conduct these investigations and now drug investigators and the criminal intelligence and gang units all work together under the larger organized crime squad. He added that patrol officers still gather evidence to help in investigating trafficking of illicit substances and the force works with counterparts in several federal agencies tackling the importation of these drugs.

Pivot Legal Society lawyer Doug King said though the police force has said this data show it is moving away from targeting lower-level drug dealers, he would have to see whether there has been a corresponding decrease in possession for the purpose of trafficking and general possession charges, which disproportionately affect those at the bottom of drug-dealing organizations.

Both Mr. King and Neil Boyd, a drug policy scholar at Simon Fraser University, agree that police can only do so much to the stop the importation and distribution of these deadly drugs.

They say a public health – not law enforcement – approach is the only way to mitigate Canada's opioid overdose epidemic.

Chief Palmer said his force is also intent on helping its public health partners to improve treatment options for those with mental-health and addiction issues.

"I'll be the first to tell you that you will never win any kind of war on drugs, because the supply will just keep coming in and coming in," he said. 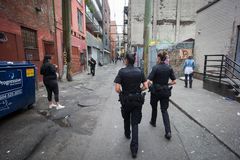 Vancouver calls on Ottawa, B.C. to step in to tackle overdose crisis
January 24, 2017
Gangs less involved in cannabis compared with other drugs: Statscan
January 23, 2017
Follow Mike Hager on Twitter @MikePHager
Report an error Editorial code of conduct
Due to technical reasons, we have temporarily removed commenting from our articles. We hope to have this fixed soon. Thank you for your patience. If you are looking to give feedback on our new site, please send it along to feedback@globeandmail.com. If you want to write a letter to the editor, please forward to letters@globeandmail.com.
Comments