The Canada Day long weekend is one of the worst times of year for drinking and driving fatalities in B.C. According to data from ICBC and police departments, recent Canada Days have seen an average of two people killed in the province from impaired driving crashes.

But alcohol-related collisions in B.C. are falling dramatically. This weekend was the launch for the summer CounterAttack campaign against impaired driving, and police and government officials released statistics showing the annual death toll for drinking and driving has fallen by 51 per cent in B.C. since September, 2010.

The reason for the fall, according to the Ministry of Justice, is the tough new laws enacted at that time, known as the Immediate Roadside Prohibition program. Police can now immediately suspend a driver's privileges based on the results of a roadside test. Scott Macdonald, assistant director of the University of Victoria's Centre for Addiction Research, wrote a study this month that confirmed the effectiveness of the new laws.

Q: What did your team's research determine about B.C.'s new laws?

A: We looked at a time-series trend over the previous 15 years, and then projected from the trend. We found a 42-per-cent reduction in alcohol-related fatal collisions [since the new laws came into effect], so that was 44 fewer fatal collisions per year. There could be more than one person that died in a collision, but for most of them it's just one person, about 80 per cent of them.

Q: What is it about the new laws, in your findings, that has caused such a large reduction?

A: It allows police to stay on the road and patrol more. It's much more efficient than charging them under the Criminal Code, where it takes police three hours to process one person, on average.

If it goes to court, it's another four hours. And it takes 35 weeks to go to court, and 15 per cent of drivers are able to beat the charges. With this new system, everyone who blows over, under the Highway Traffic Act, receives immediate sanction.

So it increases the perceived likelihood that people will get caught. The punishment is immediate, but the severity is a little bit less because they're not getting a Criminal Code conviction.

Q When you looked at the previous 15 years, was there a trend in those numbers?

A: Yes, drinking and driving collisions had been coming down prior to the new laws. This is why we did a time-series modelling – we had to take that into account. This was a drop over and above the pre-existing trend. Drinking and driving collisions have been coming down for 30 years across Canada and North America. There've been continual new policies, graduated licensing which has had an impact on new drivers, lowering the minimum blood alcohol concentration. Plus more more education.

Q: Is it possible this recent drop is a statistical fluke?

A: We would only expect a drop of that magnitude maybe less than 5 per cent of the time. It's possible it's a fluke, but based on statistical procedures it's unlikely.

Q: Have you researched other effective ways to prevent drinking and driving?

A: I haven't studied it, but there has been research on the interlock devices which has been positive – a harm reduction approach. An interlock device is where drivers must breathe into a Breathalyzer before they can turn on their cars.

Futuristically speaking, we may eventually have eye analyzers. An eye analyzer would be an anti-theft device … you couldn't start the car unless it recognized your iris. It could also detect whether you are impaired. I think that's what may be coming. I don't know if the government would have the will to force manufacturers to install them, but the technology is close to being available now. 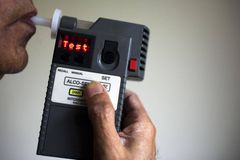