Experts are blaming El Nino for speeding up nature's clock and forcing firefighters to deploy weeks ahead of normal to battle wildfires across rural Western Canada.

They say the natural phenomenon, which cycles every two to seven years, has been activated early this year and is predicted to accelerate wildfire activity across the northwest.

The tinderbox effect will be felt from Oregon to British Columbia and across the northern Prairies into Manitoba and the Northwest Territories.

"Some of us are certainly happy to have a nice summer without rain, but from a wildfire perspective it does create a greater wildfire hazard in this region, and even further north, because of that lack of precipitation," said geography Prof. Ian McKendry of the University of British Columbia.

Firefighters have already been dispatched to scores of fires in B.C., Alberta and Saskatchewan.

Nearly 5,000 Albertans were evacuated from their homes around Wabasca, more than 300 kilometres north of Edmonton. All evacuation orders had been lifted by Wednesday, allowing residents to return to their homes.

An unusually large wildfire for this time of year raged for two weeks south of Prince George, B.C., before it was fully contained earlier this week.

A fire nearly 20 square kilometres in size was burning northwest of La Loche and Garson, Sask.

While El Nino has kicked off the wildfire season early, forecasters say it also has the potential to develop in strength.

The phenomenon itself involves a reversal of winds and currents that moves warm waters across the Pacific, altering the atmosphere to change weather patterns.

Rather than create above-average temperatures, however, El Nino tends to reduce precipitation, said Kerry Anderson, a fire research scientist with the Canadian Forest Service. Snowfall also melted weeks to a month ahead of schedule because of El Nino, he said.

"There are perhaps two dozen global models, they're all more or less in consensus that an El Nino event is kicking in," he said. "But one thing we're watching is perhaps if the situation may settle down later in the summer, which early predictions seem to indicate."

Anderson said that on a daily basis, the number of fires burning will depend on factors such as thunderstorm activity, the availability of fire-suppression resources, wind and forest conditions.

"They're all factors that could affect whether fires are contained or whether it's the off chance that you get an escaped fire that could grow into something more serious."

But El Nino is known to affect regions differently. California, which has been suffering through one of the most severe droughts on record, may finally get reprieve.

McKendry said El Nino is predicted to shower far more rain upon the southern state over the summer and possibly into next winter.

He said the "see-saw point" where the precipitation varies between north and south is the Oregon-California border.

Five things to know about this year's wildfire season in Western Canada:

1. Experts contend El Nino is responsible for an early wildfire season that's predicted to contribute to an above-normal number of blazes in B.C., the Prairies and the Northwest Territories.

2. While a wildfire that raged for two weeks south of Prince George, B.C., is not unheard of this time of year, its 25,000-hectare size was more comparable to fires that erupted in July and August of last year.

3. A silver lining of a catastrophic fire season in the Northwest Territories last year is that a resultant patchwork of burned areas may act like speed bumps to prevent new fires breaking out. It often takes 10 or more years for the patches to become flammable again.

4. A B.C. fire information officer says people often believe that short bursts of rain drive down the danger rating and are good for preventing wildfires. Instead, the officer says prolonged rainfall is required to wet the finer fuels deep in the ground.

5. Fire is a natural part of the ecosystem in Canada, specifically helping the boreal forest to rejuvenate. Fire scientists say there is an ongoing struggle between balancing the ecological benefits of fire against the safety of the Canadian public.

Expert warns fire season in Northern B.C. getting worse
May 18, 2015 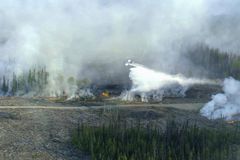