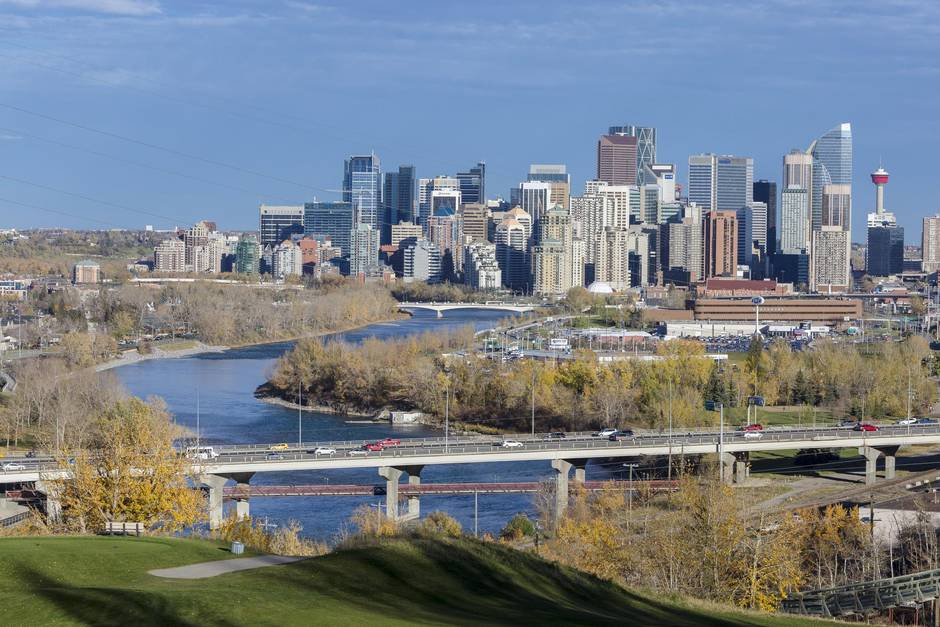 The Bow River runs through downtown Calgary. (Chris Bolin/For The Globe And Mail)


The Conservative seat count on election night might depend on the party’s ability to get supporters excited about voting, writes Justin Giovannetti


If Alberta has many voters like Ray Menard, the province’s political image in Ottawa could undergo a significant change this election. A self-described prairie boy, raised by a family that depended on the oil patch for work and preached conservative values, the 40-year-old father of five had been a reliable conservative supporter, voting only Reform or Tory in the past. On Monday, he will be casting his ballot for the Liberals.

Alberta has long been a conservative stronghold that has offered few openings for Liberal or NDP challengers. As recently as 2008, the province’s entire parliamentary contingent sat with Stephen Harper’s Conservative Party.

While rural Alberta is expected to remain squarely in the Conservative column on this election day, voters like Mr. Menard have helped create a number of cracks in the once nearly impregnable Tory monolith.

In Edmonton, NDP Leader Tom Mulcair held a rally on Friday evening, as a number of New Democrats are in tight races with Conservatives in the provincial capital. Liberal Leader Justin Trudeau will be stopping in Calgary on Sunday to help candidates who could break the party’s four-decade losing streak there.

He says what began as questioning of the Tory government’s sweeping omnibus crime bill in 2012 slowly led to more questions and an eventual rejection of the party that he had long supported.

Describing himself as being somewhere between a red Tory and a blue Liberal, he says he stopped seeing his conservatism reflected in the Conservative Party.

“I had to look at it and ask myself, ‘Is this a truly conservative thing to do?’ It seemed to me that they were spending money on things where there was no evidence it would reduce crime,” he said of the far-reaching crime bill. “I’m fiscally conservative – why would you spend money you don’t need to spend?”

He now has an eight-foot by four-foot Liberal sign on his yard.

“I’ve been pretty cautious so far. I’m careful to say that ridings are in play, but that doesn’t mean there will be any breakthrough,” said Janet Brown, an independent pollster based in Calgary. “But the recent trends in the polling suggest to me that maybe I’ve been a little too cautious. When Alberta is more competitive, it makes the country competitive.”

The riding was held by Liberal Anne McLellan until 2006 – nicknamed Landslide Annie because of her narrow victories. Recently, she’s campaigned with Liberal candidate Randy Boissonnault and gave him the hopeful nickname of Landslide Randy.

“You know, 80 per cent of the people at the doors have said they want change. What has happened in the last five days is that people looking for change are committing to vote for the Liberals,” Mr. Boissonnault said. “I’ve felt momentum at the doors.”

Ms. Brown has been counting lawn signs in downtown Calgary over the past week to see which candidate has put up the most – a far from scientific poll. She says former Liberal MLA Kent Hehr has come out ahead.

“Whether Kent Hehr can win or lose, something has changed where in the heart of conservative Calgary, people are proudly putting a Liberal sign on their lawn,” she said. Where she’s only had a single sign on her own cul-de-sac in the past, there are eight this year, most Liberal, she said.

The Conservative seat count on election night will depend on the party’s ability to get supporters excited about voting, according to Chaldeans Mensah, a political science professor at Edmonton’s MacEwan University.

“As is typical of the Conservative campaign, they’ve taken Alberta for granted. This part of the country remains a Conservative stronghold, but there are definitely signs of breaches in that stronghold,” Prof. Mensah said. 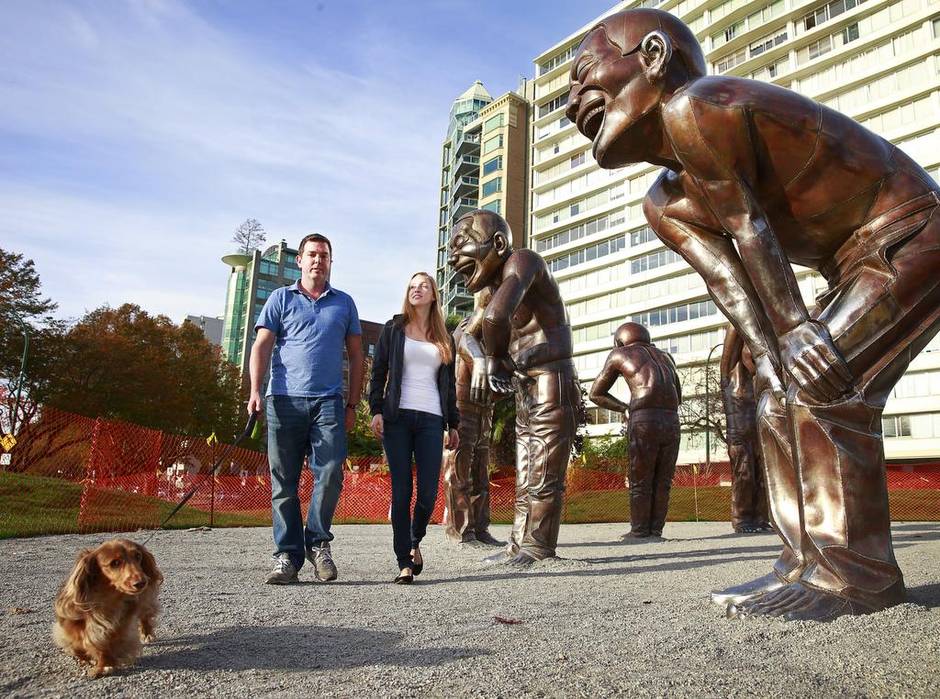 Dusty McKinnon and Rebekah Nathe own condos in Vancouver. (Jeff Vinnick/For The Globe and Mail)

Two years ago, Dusty McKinnon gave up his Vancouver-based sustainable clothing company and moved to Calgary to work in the oil and gas industry. He and his partner, Rebekah Nathe, had wanted to enter the real-estate market, but Vancouver’s housing prices simply outpaced any savings the two could accumulate from a combined income of $90,000.

Like most Canadians, the couple self-identify as “middle class,” the demographic most coveted – yet so vaguely defined – by Canada’s federal parties. But a 2013 internal government document defines the concept more clearly, saying that researchers in North America consider the middle-class to be those whose after-tax family income adjusted for family size falls between 75 per cent and 150 per cent of the overall adjusted median income.

Mr. McKinnon, who splits his time between the cities, says their household income has grown to $140,000. He and Ms. Nathe, a nursing student, now own two st condos in Vancouver and rent in Calgary and pay “huge amounts of interest.”

These are among the parties’ promises to help the middle class:

Conservatives: Lower the small-business tax rate to 8 per cent from 11 per cent; double federal grants for low- and middle-income families contributing to Registered Education Savings Plans; raise the limit on RRSP withdrawal to $35,000 from $25,000 for first-time home buyers.

Liberals: Increase taxes for wealthiest Canadians to fund a tax cut for those making between $44,701 and $89,401; run deficits over next three years to invest in infrastructure and stimulate economic growth.

NDP: Phase out interest on student loans; create one million child-care spaces at no more than $15 a day; dedicate $500-million a year to parental leave for a second parent; reduce the age of eligibility for Old Age Security from 67 to 65. 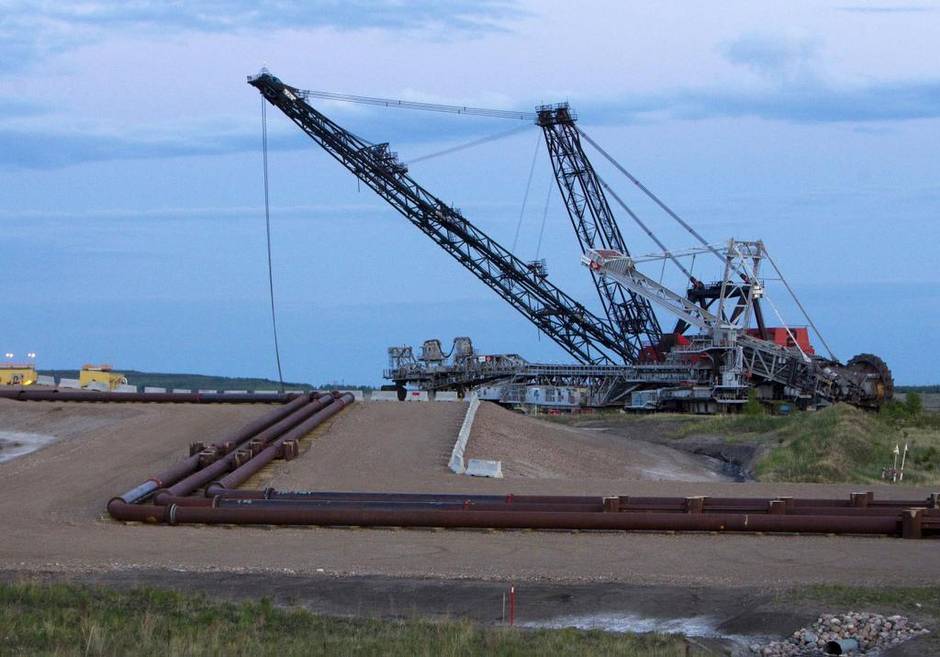 The oil patch should benefit the most from new pipelines. (Ben Nelms/For The Globe and Mail)

The pipeline approval process – once a quiet task involving little more than tedious paperwork and auto-approvals – is now a fiery and divisive exercise. Some voters who do not know the difference between pork and pipeline pigs will decide which party to support based on energy policy.

In economic terms, the oil patch should benefit the most from new pipelines. But environmental regulations complicate this possibility.

On one hand, if new legislation proves costly for oil companies, that will lessen the economic upside.

On the other hand, pipelines may not gain support in Canada and the United States unless new environmental rules are implemented.

Four proposed pipeline projects are at the centre of the debate: Enbridge Inc.’s Northern Gateway to the West Coast, giving companies access to markets in Asia; Kinder Morgan Inc.’s expansion of its Trans Mountain network to British Columbia’s coast; TransCanada Corp.’s Keystone XL plan to connect the oil sands to refineries in Texas; and TransCanada’s Energy East project, which would ship oil as far east as the Atlantic coast through a combination of new and existing pipelines.

Conservatives: They support pipelines, so long as they meet environmental regulations. The Tories have spent years lobbying hard at home and abroad, but one of the party’s most notable political shortcomings is that it has been unable to secure support for Keystone XL in the United States or any pipeline to tidewater.

Liberals: They favour Keystone XL but, if elected, will have to persuade U.S. presidential candidates to get on board. Democratic front-runner Hillary Clinton, for example, has said she’s opposed to the project. The Liberals have not taken a firm stand on Energy East and are against Northern Gateway. Leader Justin Trudeau was for Trans Mountain until he decided it needed further consideration

NDP: The party is cool to Energy East under the current regulations; lukewarm to Trans Mountain; and against Keystone XL and Northern Gateway.

Greens: Against all proposed oil pipelines. 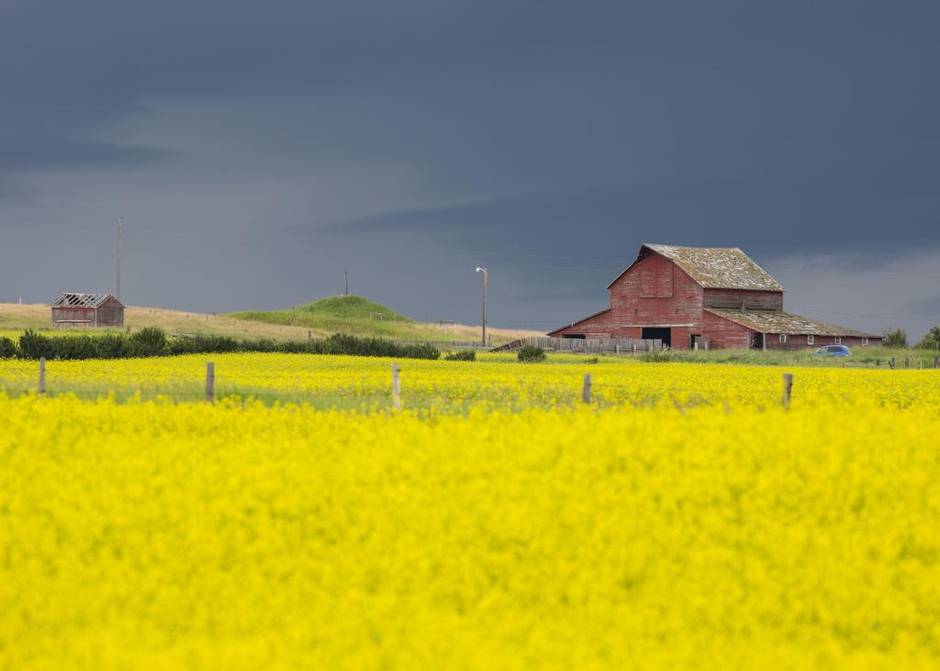 Grain producers in the West are celebrating the TPP. (Chris Bolin)

Canada and 11 other countries reached a major trade deal – the Trans-Pacific Partnership – on Oct. 5, two weeks before voting day. It took five years to negotiate the agreement, and it flared up as an election issue, particularly in Ontario and Quebec’s dairy country. While milk and poultry producers are among those unhappy about the deal, agricultural players ranging from grain producers to cattle ranchers in the West are celebrating the TPP.

Take the canola industry as an example. Alberta and Saskatchewan dominate the global canola market, and the country exports 90 per cent of its canola products, ranging from raw seed to refined oil, according to the Canola Council of Canada. But punitive tariffs kept a lid on exporting products to places such as Japan and Vietnam. Japan hits Canadian crude canola oil with a 13-per-cent tariff and refined canola oil with a 15-per-cent tariff, the lobby group notes. Under the TPP, these levies would be phased out over five years. The same goes for canola meal tariffs.

Further, the trade deal would immediately make it easier for Canada to export other so-called value-added canola products such as margarine and shortening to the United States.

Exports of Canadian canola products would climb by about $780-million a year thanks to the TPP, according to the industry’s lobby group. Exports currently stand at about $9-billion a year, said Brian Innes, the vice-president of government relations at the Canola Council of Canada.

“It is an incredible deal for canola,” he said.

The Canadian Cattlemen’s Association also rallied behind the deal, again using Japan as an example. Canada, it said, could double or triple its beef exports to Japan to nearly $300-million per year.

Conservatives: The Tories signed the TPP deal so, yes, they support it.

Liberals: Leader Justin Trudeau endorses trade, but did not take a definitive stand on the TPP during the campaign. 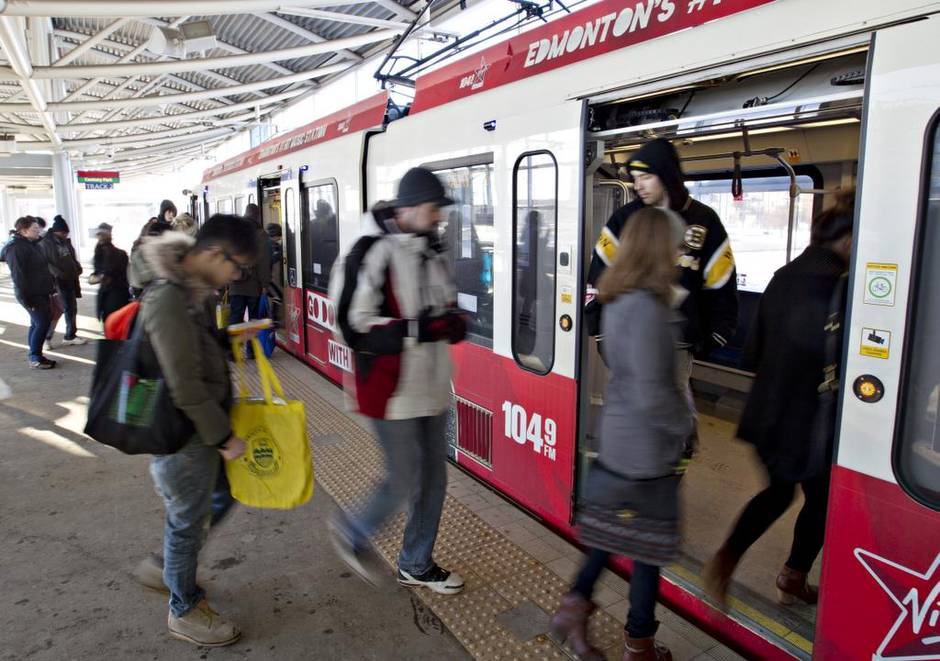 Alberta’s two largest cities are eyeing the expansion of their light-rail systems after years of fast population growth and both are looking at the federal government for billions of dollars to fund transportation plans as they contend with increasingly congested highways.

Calgary is looking for $1.5-billion for a 50-kilometre line on the C-train network to link the city’s north and south ends. In Edmonton, a 27-kilometre line is planned from the southeast to the west end.

All of the parties have made promises about transit nationally. In budget announcements, the Conservatives had promised $1-billion a year, which set a benchmark that other parties then tried to beat.

Liberals: In radio ads airing in the provincial capital, Liberal Leader Justin Trudeau has committed to completing the Valley Line. The platform promises $20-billion in national transit funding over the next decade, covering the funding requests from Calgary and Edmonton. “The federal government has to step in and start building this stuff again,” said Randy Boissonnault, the Liberal candidate in Edmonton Centre. “Under a Liberal government, the LRT Valley Line to the west will get built and the city can start building it in 2017, not 2024 with the NDP or never with the Conservatives.

NDP: Along with a plan that will invest $1.3-billion annually over two decades, the NDP has promised to remove partisan interference from Ottawa in transit planning. As well as funding Calgary’s $1.53-billion Green Line, the party would increase gas tax transfers to fund other local infrastructure. In Edmonton, the NDP would invest $2-billion in transit over the next 20 years to complete the LRT system. “We aren’t going to send the money with strings attached,” said Gil McGowan, the NDP candidate in Edmonton Centre.

Greens: They have committed the gas-tax fund and one percentage point of GST, approximately $6.4-billion annually, to municipal infrastructure.