The governing Liberal Party in British Columbia is under investigation for its fundraising practices by Elections B.C., after The Globe and Mail revealed lobbyists are illegally funnelling money to the party – routinely – on behalf of corporate and special interests.

"I can tell you these are potentially contraventions of the Elections Act," said deputy chief electoral officer Nola Western. "It appears to be a systemic problem that needs to be addressed."

The independent body that enforces the province's election laws said its probe will look at tens of thousands of dollars in multiple donations, made by power brokers such as Mark Jiles and Byng Giraud, who paid under their own names, with personal credit cards.

Both registered lobbyists acknowledged to The Globe they were actually buying Liberal fundraising tickets on behalf of their clients and companies, then getting reimbursed, which is against the law.

Mr. Jiles is an independent consultant, paid by numerous clients to lobby politicians to make decisions favourable to those clients. Mr. Giraud is the top in-house lobbyist for Woodfibre LNG, an Indonesian firm building a controversial liquefied natural gas plant near Squamish, B.C., which has recently been given government approvals and tax breaks.

The B.C. Liberals will also have to answer for how the party collects its donations, said Ms. Western. That's because when anyone goes on the party website to buy tickets to a fundraiser, the first choice they have is to donate with their personal credit card – no questions asked.

"[The party] should know better," said Ms. Western, adding the law says parties must determine whether a donor is an individual, a corporation, a non-profit or other type of donor, then report their contribution to Elections B.C. accordingly.

"The [party's] financial agent is not allowed to accept that donation without collecting that information."

Liberal Party spokesman Emile Scheffel acknowledged to The Globe when a donor uses a personal credit card, the party automatically records that as an individual donation.

"There has been confusion and we are working immediately to clear up that confusion," he said.

The Globe asked for an interview with party leader and Premier Christy Clark, but was told she was not available.

Mr. Jiles and Mr. Giraud are among the biggest Liberal supporters on a list of 53 frequent donors, compiled by The Globe, who also gave multiple times under their own names. They are all lobbyists, executive directors and others who get paid to act for special interests.

The revelations about their funnelled donations come two months before the next B.C. election, which the Liberals will finance with a record $12-million raised by the party last year – much of that through heavily criticized cash for access fundraisers.

B.C. has no limit on how much any contributor can give or how often, making it a holdout and an outlier among other large provinces and the federal government, which have all put a cap on individual donations.

As a result of The Globe's investigation, Dermod Travis of the watchdog group Integrity B.C. said he went back to the public record and now has questions about 359 donations, totalling more than $1-million, from people representing special interests who gave in their own names several times in the last decade.

"I looked at the ones that jumped off the page and do not fit the usual pattern of giving," Mr. Travis said. "To have all this happening – and have no one say boo about it – speaks to the lack of regulatory oversight of political donations."

He added that he doesn't buy the recent numbers touted by the B.C. Liberals, which said their individual donations outnumbered those from corporations four to one. Mr. Travis now suspects many of those individuals were giving money illegally, on behalf of others.

"It is simply happening far too frequently with the same people far too much," said Mr. Travis. "It throws an incredibly large chunk of their donations into question."

Duff Conacher of the citizen advocacy organization Democracy Watch, who is viewing this from his base in Ontario, said B.C. is hurting its reputation by allowing what he calls "legalized bribery" by power brokers who are paid by special interests.

"If a big business was looking to buy off politicians, B.C. would be the place to go," Mr. Conacher said. "The system B.C. has now is the best government money can buy – and that's not democratic and it's unethical and it looks really bad to the rest of the country."

The B.C. Liberal Party said it will revamp its website immediately, to remind donors they can't donate on behalf of others.

"We will take a look at how prevalent this seems to be and where Elections B.C. expresses a concern we will work to address this," said Mr. Scheffel.

However, he wouldn't say whether the party will contact individual donors to make sure their contributions weren't recorded under the wrong name. The law requires the party to return any prohibited donations of that nature, and retrieve any tax receipts issued to those individual donors.

On Sunday, the leader of the B.C. Green Party called for the RCMP to also "launch an immediate investigation."

"The [Globe] report raises very serious questions about influence peddling and corruption of our democratic process," Andrew Weaver said, in a media release. "These disturbing practices must end."

Charges are possible, but Elections B.C. said it's too early to say whether any of this will be referred to police or the Crown.

"I think we have some work to do," said Ms. Western. 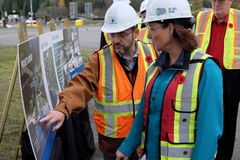 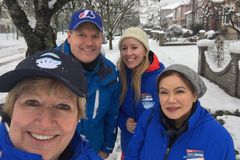