An aboriginal organization leading the fight to prevent oil tankers on the British Columbia coast once took money from Enbridge Inc., the company planning to sail those same ships larger than the Empire State Building along the coast.

Mr. Sterritt estimates Enbridge has provided up to $1-million to B.C. first nations to study the pipeline. Most first nations contacted by The Canadian Press would only say they accepted money from the company, but wouldn't confirm amounts.

The Burns Lake Indian Band confirmed that a previous chief and council accepted $60,000 from Enbridge to study the pipeline, which stretches 1,177-kilometres from Bruderheim, Alta., to Kitimat, B.C.

Coastal First Nations, an alliance of 10 first nations from the north and central coasts and Haida Gwaii, received the $100,000 from Enbridge about five years ago to conduct studies, but now has a policy against accepting Enbridge dollars, said Mr. Sterritt.

"Five, six years ago when they first proposed this project, we didn't come out and say we're opposed to it," he said. "We said we need to research and determine whether or not we are in support or against the project."

Mr. Sterritt said after conducting several studies and gathering community consensus, the first nations decided they couldn't risk an oil spill along the coast or near the Great Bear Rainforest.

Enbridge spokesman Paul Stanway said the money the company has provided to first nations to study the pipeline project does not come with strings attached and has nothing to do with the company's attempts to reach equity-sharing agreements with first nations.

"We wouldn't do that," he said, adding that what are being called protocol arrangements with first nations are part of the joint review process and the equity sharing agreements are outside of the regulatory process.

Mr. Stanway wouldn't name the first nations Enbridge has provided with cash or estimate the amount of money involved.

"We've attempted to work with everybody along the right-of-way, and also with coastal first nations," he said.

Gitxaala First Nation Chief Elmer Moody said his north-coast nation accepted a limited amount of money from Enbridge – he wouldn't say how much – to study the project, but now is firmly opposed on constitutional and environmental grounds.

Last week, the Gitxaala filed legal action in federal court claiming it should not be excluded from a Transport Canada review assessing Northern Gateway's proposed shipping routes and marine terminals.

The proposed oil tanker routes pass through Gitxaala territories, but the first nation is not part of the transport review process, said the band.

Moody said earlier the Gitxaala prepared for more than two years – undertaking the largest exercise in the First Nations' history – for its appearance before the federal Joint Review panel that is assessing the project.

Mr. Gerow is one of a handful of B.C. first nations leaders to publicly state his community will actively consider an equity deal with Enbridge, worth about $7-million.

The Prince George area Lheidli T'enneh Band and Terrace's Kitselas Indian Band have also expressed interested in Enbridge, but say they have yet to sign anything.

Burns Lake's Lake Babine Nation has worked with Enbridge in the past, but is no longer interested in Northern Gateway. Current Chief Wilf Adam, who says the proposed pipeline will run about 100 metres from his home, would not discuss how much, if any, Enbridge money was given to his nation.

But Mr. Stanway said Enbridge has signed more than 20 equity-sharing deals with the up to 43 first nations along the pipeline route, with about half of those deals signed in B.C. The total equity stake is valued at $400-million, he said.

Only two bands have publicly acknowledged they've signed such a deal. One of them has already been rescinded and the other is under legal review.

Mr. Sterritt said the Enbridge protocols with first nations could help the company in its bid to win approval for the project because they will likely be used in court or at regulatory hearings as examples of the company's efforts to consult with aboriginals.

"They're definitely out there trying to mark on the calendar that they've consulted and attempted to accommodate," Mr. Sterritt said. "In the meantime, they get brownie points for trying to talk to talk to us and then they come along and make an equity offer and say we've accommodated them."

Prof. George Hoberg, an environmental and natural resource policy and governance expert at the University of B.C., said current Canadian law does not require that the government get the approval of first nations to proceed with Northern Gateway, but the law requires first nations to be consulted and accommodated.

He said aboriginal court challenges are likely because, with so many first nations opposed to Northern Gateway, the burden to prove accommodation is challenging.

Mr. Stanway said he wasn't prepared to comment on concerns raised by the north-central B.C. Yekooche First Nation, who signed on with Enbridge for an equity deal last year. Now the newly-elected chief and council have called in lawyers looking for a way out.

He said going public with the equity deals isn't part of the package, even though a leaked copy of one of the agreements encourages the first nation "to participate in and support the Northern Gateway Project, through the regulatory process, during construction and throughout its lifetime of service to Canada's energy industry."

"I have absolutely no business insulting the ancients (elders) by negotiating my inheritance," said Joseph.

After Mr. Derrick signed with Enbridge last December, he was forced into hiding after band members nailed shut his office in Hazelton, posted a 24-hour watch nearby and put up Derrick-wanted posters across northwest B.C. 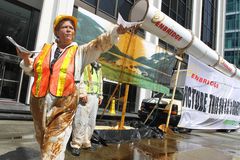 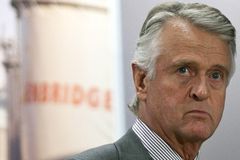 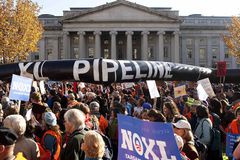