The Tsimshian Storm pitches up and down on heaving water as it edges toward Hecate Strait. Humpbacks wave great tails at the grey sky. Eagles circle. A pair of porpoises leap above the waves. Not far from here, two million scallops are suspended below the surface on a farm owned by local first nations and a minority-stake Chinese company.

This is the picture environmental groups, and many of those first nations opposed to seeing oil shipments off Canada's West Coast, are eager for Canadians to see. It is why they have brought reporters on this boat to take it in. They are arguing that this area is too valuable for oil to be shipped near here and Enbridge has not disclosed the magnitude of risk to the area.

This week, federal hearings into the proposed Enbridge Northern Gateway pipeline have come to Prince Rupert to examine marine impacts and spill response. On Tuesday, Enbridge representatives were grilled on how they would compensate local fishermen if their gear were destroyed or damaged by passing tankers.

Against this backdrop, a new study conducted by University of British Columbia scientists and funded by the World Wildlife Fund concludes that a large spill would leave hundreds of millions of dollars in losses in a region where nearly 30 per cent of the local population draws some form of employment from the ocean economy.

Ngaio Hotte and U. Rashid Sumaila, researchers at UBC's Fisheries Centre, examined the hit to fishing, tourism and marine transportation from two types of spills, a "medium impact" 63,000-barrel spill, and a "high impact" 257,000-barrel spill similar in size to the Exxon Valdez disaster.

The smaller spill would create total losses of $41-million to $189-million, while the larger one would exact an $87-million to $308-million toll.

Those losses pale in comparison to spill cleanup costs that the UBC researchers calculated by using some of Enbridge's own data: $2.4-billion for the smaller spill, $9.6-billion for the larger. The current construction pricetag for Northern Gateway is $6-billion.

"If these costs are accounted for, all of the projected economic gains from the Enbridge Northern Gateway project could quickly turn into losses in the event of a tanker spill," the researchers conclude.

But the study makes a number of key omissions: It calculates losses to local industries without accounting for spill cleanup efforts that might trim those losses. And it uses the tanker terminal alone to formulate its estimate of Northern Gateway's financial benefit, which will total $628-million, it estimates. That ignores money spent to build the pipeline – or even to conduct cleanup work, in the case of a spill. Enbridge also points to its own estimate, which the researchers don't challenge, that a large spill is likely to occur only once every 15,000 years.

"The choice of assumptions consistently overstates the negative impacts," said Janet Holder, the Enbridge vice-president in charge of Gateway. It is "ludicrous," she said, to dismiss a project based on the possible impact of such a rare event. "Based on these type of results we would never build a bridge because it would fall down or we would never build a dam because it would break," she said.

Yet the view from the waters off the B.C. North Coast is slightly different. Here, accidents look less infrequent, and the risks more significant.

Brian Falconer, marine operations director with the Raincoast Conservation Foundation, has looked at nearly a dozen oil ship terminals around the world. None of those operated for longer than 18 years before tankers they loaded experienced major spills, he said. The Exxon Valdez disaster, for example, took place fewer than 12 years after oil shipments began from Alaska.

Worrisome accidents have happened in B.C., too. On Dec. 2, 1993, the bulk carrier Trans Aspiration grounded on Kestrel Rock not far from Prince Rupert, in heavy rain and relatively open water. Other large ships have run aground near here in recent years, too; many had aboard B.C. marine pilots whose local knowledge is supposed to help avoid groundings.

Weather is a further complication. In the past year, winds in the region have been measured at 140 km/h. Waves have reached 26 metres.

"On a lot of days it is hell. It is hell out here," said Mr. Falconer, who accused Enbridge of a consistent "underrepresentation of risk" that, he said, is "really hard to stomach."

Enbridge uses a methodology, Mr. Falconer said, that does not acknowledge the worst weather. In documents before the National Energy Board, Enbridge says the region experiences significant wave heights up to 14.5 metres. The company, which acknowledges that winds can reach 185 km/h, says its wave measurements better reflect conditions ships would be likely to see and argues that severe storms can typically be predicted.

Enbridge has filed about 20,000 pages in documents examining the impact of its project, many produced by experts in their field, said Todd Nogier, an Enbridge spokesman.

"Enbridge Northern Gateway has undertaken more studies, more analysis and been scrutinized more than any energy infrastructure in Canadian history," he said. 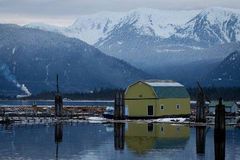