Officials have determined the failure of a dam holding back an 80-year-old reservoir lake is responsible for a mudslide that destroyed five homes near Oliver, B.C. But authorities are still scrambling to figure out who was responsible for monitoring and maintaining the reservoir as property owners start asking if the slide could have been prevented.

It was only "by the grace of God and a little bit of luck we came out of this pretty unscathed in terms of casualties," said RCMP Corporal Dan Moskaluk at a media briefing Monday afternoon. He added people likely would have died had the slide happened in the middle of the night when people were in bed.

Betty Jentsch was home with her 16-year-old daughter Emily Sunday afternoon when she heard "a roaring thunder sound that wasn't stopping."

Mrs. Jentsch looked out her window at Testalinden Creek, which flows down a hill next to her property from a reservoir lake built in the 1930s. "Just a wall of mud was coming down the creek," she said.

She ran upstairs and grabbed her daughter. When she got back downstairs, she looked out the back door and saw "a mountain of mud with my vehicle coming towards the house," she said.

Mrs. Jentsch and her daughter ran out another door and headed north as quickly as they could move, running through orchards and hopping several fences until they reached higher ground. "She turned around and looked back and saw the mountain of mud with our garage heading our way," said Mrs. Jentsch of her daughter.

Mrs. Jentsch, whose family is now staying with relatives, has not spent too much time worrying about who is responsible for the mudslide. "I'm just glad that we're okay. Everything else can be replaced," she said.

But Hardeep Kehla, whose 10-acre cherry and apricot orchard is covered in "maybe 10 feet of mud," thinks more should have been done to prevent the slide. Mrs. Kehla figures the slide has cost her family close to $1-million.

The slide was triggered when an earth and soil dam on the reservoir lake gave way, releasing two-thirds of its water.

Authorities admitted they were not prepared for the disaster that unfolded.

"I think it's fair to say everybody was caught off guard," said Mark Woods of the Regional District of Okanagan-Similkameen.

Mr. Woods could not say how many people have been affected by the slide. Besides the five homes that were destroyed, another 25 homes were evacuated.

Shaun Reimer, a hydrotechnical engineer with the B.C. Ministry of Environment, said officials are still trying to figure out who was responsible for the reservoir lake and why its dam failed. It was originally built in the 1930s to provide irrigation water to an orchard but was later taken over by the federal government. Mr. Reimer said he didn't know if the water license for the lake is currently held by a private property owner or a government agency. Whoever holds the license is responsible for maintaining and monitoring the lake.

"Right now, we're still investigating," he said. He could not provide an estimate of how much water was in the lake when it gave way but he did say the ground around the lake is soft, meaning there is a possibility it could give way and release the rest of the water into the valley below. Crews were to assess the risk late Monday afternoon.

The general manager of the B.C. Fruit Growers' Association, Glen Lucas, said he was not aware of any present day orchards using water from Testalinden Creek and the reservoir above it.

"Most of the water is provided by the city of Oliver water utility," he said.

Greg Norton is a 57-year-old cherry farmer who has lived in Oliver his whole life. Though his orchard was unaffected by the mudslide, he, too, wonders if it could have been prevented.

"It makes you wonder why [the reservoir]was even there because no downstream agricultural users benefit," he said. "Maybe in retrospect, the dam should have been moved years ago."

In addition to the damage sustained by farmers, a small section of Highway 97 between Oliver and Osoyoos, near the American border, is covered by about a metre and a half of mud. Traffic is being detoured around the slide area, said Murray Tekano, district manager with the Ministry of Transportation and Infrastructure, and it could take up to four days to reopen the highway.

As well, two of Oliver's water mains are now under the slide area.

"Both of those have been exposed,'' said Bruce Hamilton, director of operations with Oliver's water utility. As a result, 10 homes are without water and 750 acres of farmland have no water for irrigation.

He added, however, there are no water quality issues.

The Liberal MLA for the area, John Slater, said money to help people affected by the slide would be made available through B.C.'s provincial emergency program, but he could not say how much.

"We're going to pull out all the stops because these farms are devastated," he said. 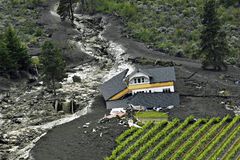 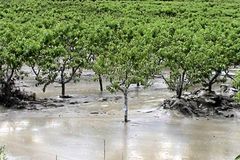