Decked out in scarves and tuques in Canadian reds and whites, Alan Kurdi's uncle, aunt and five cousins – all members of a family that has come to symbolize the struggle of millions of Syrian refugees – sprinted out of the customs area at Vancouver's airport after a flight from Germany to embrace their relatives and begin their new lives.

Onlookers clapped and a throng of cameras snapped as Mohammad Kurdi, his wife and their children hugged and kissed Tima Kurdi, the Coquitlam, B.C., woman who became a global advocate for Middle Eastern refugees after a photo was published of her three-year-old nephew, Alan Kurdi, lying lifeless on the edge of the Mediterranean Sea. The picture focused the world's attention on those displaced by Syria's brutal civil war and made immigration a central issue in this fall's federal election.

"We almost lost hope, but thank you to the Canadian government and the Canadian people who made it happen," Mr. Kurdi said as his sister translated from Arabic into English.

The moment was bittersweet for Mr. Kurdi, who had been living in a barracks-style camp in southern Germany while his family was in Istanbul. This summer, his brother, Abdullah, decided to follow him to the European Union after discouraging news about Mohammad's attempt to get to Canada.

The Canadian government had told Mohammad his original refugee application lacked the proper documentation from the United Nations. But Abdullah's attempted crossing from Turkey to Greece ended in tragedy when the small boat he and his family were travelling on capsized. His wife and two sons drowned.

On Monday afternoon, Mohammad Kurdi said he was extremely grateful for another chance from the Canadian government, which reached out to his sister in October just before the federal election and asked her to try to sponsor his family again, as the government was no longer requiring the difficult-to-obtain United Nations documents.

The Kurdis are among 25,000 Syrian refugees the Canadian government has pledged to welcome by the end of February. Immigration Minister John McCallum said last week the government will likely not meet its target of having 10,000 of them on Canadian soil by Jan. 1. The federal website that updates progress listed 2,413 refugees as having arrived in Canada by Dec. 26.

Tima Kurdi said it's important that governments around the world continue to welcome refugees.

"We wish the war to end, and most of [the refugees], that's what they want," she said. "Please, don't close the door in their face."

Wearing a red scarf and clutching a paper Canadian flag given to him by a local MP, Mr. Kurdi's eldest son, Shergo, 14, told reporters he was "happy to start going to school and starting a new life."

He said he was grateful to "not work any more" – alluding to the job he took in an Istanbul sweatshop while the rest of his family awaited their fate in Turkey – but admitted he spent the entire flight from Frankfurt thinking about his struggling cousins, more than a dozen of whom are either still in Syria or have fled with their families to Turkey, Iraq or Germany.

When Mohammad Kurdi was asked whether his family longed to return to Syria eventually, he said: "God willing, we want to stay in Canada."

Ms. Kurdi's husband, Rocco Logozzo, said he is almost finished renovating a bathroom at their Coquitlam house to accommodate the seven newcomers. They can stay as long as they like, he said, noting he grew up in a Toronto home along with an aunt, uncle and their three kids after he emigrated from southern Italy with his parents as a four-year-old.

"It's not unusual to have extended family living with you for years," he said. "This is nothing new to me."

Now, the family will focus on getting the children, who range in age from five months to 16 years, into schools and improving everyone's English, Mr. Logozzo said. Mr. Kurdi, a barber by trade, may work in his sister's new salon called Kurdi Hair Design in Port Coquitlam, he added. Four of Ms. Kurdi's clients make up the rest of the private sponsor group in charge of supporting her brother and his family for at least their first year in Canada.

Before leaving the scrum of reporters, Ms. Kurdi said she still wishes to one day sponsor her other brother, Alan's father, so he can join them in Canada. He is currently living in the Kurdish region of Iraq.

"Abdullah, all of us here, we wish you were here with us. But you're always here," she said, moving her hand toward a pendant that shows a picture of Alan and his five-year-old brother, Ghalib.

She said the necklace was a gift from a supporter in New Zealand who also gave one to Abdullah.

Syrians are only the latest refugees welcomed to the Ottawa Valley
December 18, 2015 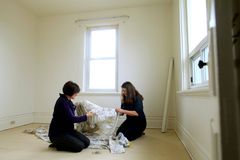