The father of two young girls killed in a Victoria-area home on Christmas Day has been charged with two counts of second-degree murder.

Andrew Berry, 43, was arrested and charged on Wednesday after his release from hospital, where he had been recovering from injuries sustained nine days earlier.

A spokesperson for the children's mother, Sarah Cotton, said the family has no comment at this time.

Oak Bay police were called in the late afternoon on Dec. 25 to a ground-floor apartment in the Victoria-area community, where they found the bodies of sisters Chloe and Aubrey Berry, ages 6 and 4.

Police said at the time that a man found injured at the residence was taken to hospital and that there were no other suspects.

Mr. Berry and Ms. Cotton met while they both worked at BC Ferries – he in the company's finance department and she in communications. BC Ferries confirmed that Ms. Cotton left the agency in 2008 and Mr. Berry did so last May, after a decade of employment.

In 2013, the two began a separation that was marked by allegations of violence and inappropriate touching involving one child, according to a court ruling on their parental rights last spring.

Friends of the family said the girls were with Mr. Berry on Christmas Day and police were called when he failed to return them to their mother at noon, as per the schedule worked out in the court case.

The family had past contact with the province's children's ministry.

In the custody battle, B.C. Supreme Court Justice Victoria Gray ruled that Mr. Berry showed "displays of poor judgment" – including maligning the children's mother in front of them, touching one of the girls inappropriately and blocking them from extracurricular activities – but that his behaviour was not egregious enough to deprive the children of time with their father.

Instead, the court granted Ms. Cotton the majority of parenting time, citing her flexible work schedule and noting she had been the girls' primary caregiver for most of their lives.

"This is not a case where family violence is a significant factor for determining parenting arrangements," the judge wrote in a judgment published on May 31. "However, minimizing contact between the parents will be better for the children as well as the parents."

The pair's relationship ended with a restraining order filed against Mr. Berry for allegedly pulling the covers off their bed, jumping on her and pinning her before getting in his car and driving away as the police were called, according to the judgment.

"From the moment the [crime unit] arrived, they have been compassionate, professional and diligent," Deputy Chief Bernoties said in a statement on Wednesday. "We've been engaged with them throughout this investigation and we're very grateful for their tireless effort." 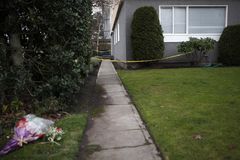