In a vacant office tucked away in a threadbare medical-professional building, ex-RCMP sergeant Colin Nielsen is setting up headquarters for a de-election campaign.

The sign on the door still carries the name of the previous tenant, the Regent Christian Online Academy, because the new signs are still on order. It's a haphazard beginning, but by Jan. 28, he hopes from here to have marshalled enough support to bump government MLA Ida Chong out of her office.

Ms. Chong, the B.C. Liberal MLA for Oak Bay-Gordon Head and Minister for Science and Universities, is the test case to see if B.C.'s Fight HST forces can use the province's recall laws to once again shape the political agenda.

The first in a series of planned recalls, this campaign will be the bellwether, and its success rests on tapping a vein of anger among the constituency's well-heeled, highly educated and deep-rooted voters over the harmonized sales tax.

Mr. Nielsen will present his recall application to Elections BC on Monday. From there, the timelines are laid out by law. It's expected that approval will be granted by Nov. 29, setting the clock ticking for his platoon of canvassers.

For the next 60 days, they'll be collecting signatures on a petition, saying the four-term MLA should be removed from elected office because she supported the HST.

Ms. Chong wonders aloud why she has been selected as a target under the B.C. law that allows citizens to fire their elected officials between elections.

"If I were accepting money in a brown paper bag, that would be inappropriate behaviour," she said in an interview. (It's a sly reference to one of the more embarrassing chapters in the history of the former B.C. premier now leading the Fight HST campaign.) "I know I have worked hard for my riding."

The Fight HST team makes no secret that Ms. Chong has been selected for recall because they think they can win here. The provincial recall law doesn't make it easy. The hurdles are so high that only one MLA, Paul Reitsma, has ever been forced out - and he quit in 1998 before the signatures were counted.

Ms. Chong won re-election 18 months ago by a slim margin. She's in an stable, urban riding with a mild climate where it is easier to mobilize people despite the winter weather. Organizers believe voters here fit the right profile for signing a recall - affluent and angry about the harmonized sales tax, and more willing than most to march to a polling booth to make their views known.

Ms. Chong is guilty of doing what almost every B.C. Liberal MLA has done, which is defend the HST. Even now, when the easiest thing would be for her to simply call for an early referendum on the tax, Ms. Chong steadfastly maintains that all the tax needs is a better explanation. "A consumption tax of this nature does make more sense," she said. "It's hard to share that with people."

Mr. Nielsen has voted for Ms. Chong's party since 1996. He retired after a 31-year career with the RCMP and got inspired to join former premier Bill Vander Zalm's anti-HST petition campaign last summer. The campaign scored an unprecedented victory in forcing the B.C. government to promise a referendum on the HST - and ultimately stirring up such a political storm that Premier Gordon Campbell is stepping down.

"The enemy is still the HST," said Mr. Nielsen. The stated objective is to continue recalling B.C. Liberal MLAs until the government abandons the tax, or at least moves up the September, 2011, referendum date.

But to maintain that kind of pressure, they can't afford to fizzle on their first recall attempt. The wild card is that recall is far more personal than an anti-tax petition, and voters (especially the many civil servants who live in Ms. Chong's riding) may balk at putting their names down on a political death warrant for a sitting cabinet minister.

Mr. Nielsen said the key will be to run a disciplined and organized team. He has more than 200 canvassers signed up including 50 he classes as "warriors" who are willing to work full-time. They will go door-to-door, or set up on the sidewalks, and they'll have two walk-in offices. They'll work from one of the most accurate voters lists in the province, and track their efforts on a database.

The New Democratic Party would be first in line to benefit if Ms. Chong is forced to face a by-election, but Mr. Nielsen said he's trying to run an apolitical campaign. "This is an un-election," he said. "Canvassers have to at least appear to be non-partisan."

Ms. Chong doesn't believe that for a second: "There is clearly a political agenda here, for a political benefit. It's re-fighting the last election."

Regardless of motive, Kennedy Stewart, a professor at Simon Fraser University's School of Public Policy, thinks the recall in Oak Bay-Gordon Head has a good chance of success. His study of last summer's anti-HST petition concluded that Mr. Vander Zalm has hit on a formula for engaging British Columbians who are not normally politically active.

And, he predicts, it's catching.

"You get addicted to this kind of behaviour, especially if you succeed," Prof. Kennedy said. "Now they have a taste of success." 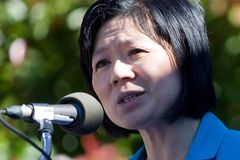 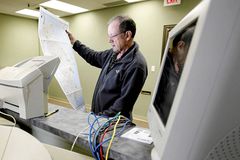 B.C., city of Victoria and police officer sued over allegations of jail assault
May 2, 2018
Tweed Curtain sets apart riding with an independent streak
May 9, 2018 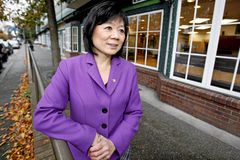 The fight Ida Chong doesn't want
April 29, 2018
Follow Justine Hunter on Twitter @justine_hunter
Report an error Editorial code of conduct
Due to technical reasons, we have temporarily removed commenting from our articles. We hope to have this fixed soon. Thank you for your patience. If you are looking to give feedback on our new site, please send it along to feedback@globeandmail.com. If you want to write a letter to the editor, please forward to letters@globeandmail.com.
Comments