B.C. Premier Christy Clark made a grim announcement in Kelowna on Wednesday: The province has already blown through its annual budget for fighting forest fires, more than a month before the flames are expected to die down for the year. The provincial government has put the cost so far at close to $150-million.

With more than 200 wildfires still burning in British Columbia, the contractors whose planes and helicopters are charged with putting out the flames have been earning bigger paycheques and taking on more risks. These aerial firefighters have come to embody the scale, the cost and the danger of Western Canada's dry, hot summer.

"I say this with a degree of respect, but helicopters thrive on disaster," said Sid Peltier, chief pilot of the Terrace, B.C.-based White River Helicopters.

"Our economics in this part of the country has gone kind of quiet," he said. "A lot of companies were kind of pleased, I guess, to be able to use their aircraft in another capacity."

The forest fire surge, he said, "came along in some ways in an opportune time," propping up sagging business for western aircraft contractors. Many of them have lost work surveying pipeline routes as the embattled resource industries of Alberta and B.C. cut expenses and oil transport projects stalled amid political pressure.

"It's been a real positive plus to the air carriers," Mr. Peltier said.

White River has only one helicopter currently fighting fires in the field, which it deploys at a cost of about $2,200 an hour including fuel. Using a "Bambi bucket" that dangles from its belly, the aircraft can drop up to 600 litres of water at a time on a burning forest.

Other firms in the industry are more guarded about financial matters, wary of seeming to profit from an environmental and human tragedy. Conair Aerial Firefighting is the country's largest aerial firefighting company, with a work force of more than 250. It operates a diverse fleet composed of water bombers and air tankers that deliver payloads of fire retardant around the perimeter of a blaze to stop it from spreading.

Jeff Berry, the firm's director of business development, refused to provide figures related to the company's revenue or rates.

"We are extremely uncomfortable talking about this right now," said Mr. Berry. "We're in the business where people die, where people lose their homes."

"We've been doing this for 46 years and we've had rainy years and dry years," Mr. Berry added. "When you're in it for the long haul like we are, a safe and effective operation" is what counts.

This week, individuals from 70 properties in West Kelowna were forced to evacuate. On Thursday, Prime Minister Stephen Harper visited the area and thanked those fighting forest fires across the country.

"We know these are tough and are sometimes dangerous jobs, and these efforts really are appreciated by everybody," he said.

Many of Conair's 78 pilots will have landed a windfall this season, flying extra hours as they live mostly in hotel rooms across the West, tethered to company-issued phones that buzz with e-mails when a job comes up.

"The more flying they do, the more money they'll make, there's no doubt about that," said Dennis Graham, the company's chief pilot and a 36-year veteran of the industry. "It's been an extremely busy season – one of the busiest in my recollection."

Still, the perils facing aerial firefighters are real, and sometimes fatal. On May 22, William Hilts, one of Conair's pilots, went down in a single-seat Fire Boss plane near Cold Lake, Alta., while fighting a 40-square-kilometre wildfire. The 38-year-old did not survive. It was the company's second fatal accident since 2010.

Heightened risk and reward appear likely to become the industry's permanent lot, as rising global temperatures could make summers like this year's more common in the Canadian West. Ms. Clark, the Premier, predicted as much at a press conference on Wednesday.

"Climate change has altered the terrain. It's made us much more vulnerable to fire," she said. "We have to be planning with the knowledge that this isn't going to be an unusual year."

Mr. Peltier, the helicopter pilot, said members of the firefighting industry have begun expecting more work in years to come, for better and worse.

"It's almost like everyone is becoming agreeable to the idea," he said. 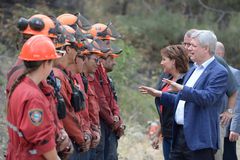 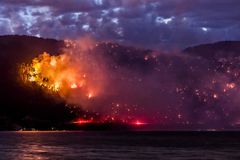 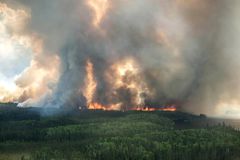