Sharleen Gale, the young Fort Nelson chief who shook the government last week when she kicked its officials out of an energy conference, knew a showdown was coming and she'd have to be strong.

That's why she held the sacred eagle feather in her hands when she took the podium at the BC First Nations LNG Summit and – with representatives from about 60 bands and major industry players looking on – told government delegates to get out.

"I respectfully ask government to please remove yourself from the room. I'm going to ask industry to stay," said Chief Gale, whose stern face only partly hid her anger.

As the stunned officials from Victoria walked out, drums and native chants ringing in their ears, Chief Gale stood at the podium with the eagle feather held defiantly over her head.

That image may become a defining one in the movement by First Nations to gain greater control over what resource developments take place in their traditional lands.

Chief Gale said delivering the rebuke was hard, but she knew she had to do it.

"That morning I decided like, I need to bring my feather. I've got some important decisions to make and it gives me strength, it gives me courage. It's like a message from our ancestors that they are watching, they're guiding us," she said in an interview.

The sudden ejection of government officials from a conference that was supposed to foster goodwill with First Nations over LNG development in the north, sent shock waves all the way to Victoria.

And well it should, because, without First Nation support, the government's whole LNG strategy could fall apart.

The crisis was triggered by a decision the government made weeks earlier – but which people didn't learn about until Tuesday, while the conference was under way.

Chief Gale became incensed when she learned the government, without any public consultation, had amended the Reviewable Projects Regulation to exempt sweet natural gas processing plants from environmental assessment. The change meant gas plants could be built without any regard for First Nations' concerns about the environment.

Chief Gale, who is 33, worked for Spectra Energy for 12 years before getting elected to lead her community in 2012. She is not against the oil and gas industry.

Her band sits atop three of the province's biggest shale gas fields. The raw resource that will fill the pipelines, processing plants and tankers the government so badly wants to see in B.C., will mostly come from Chief Gale's traditional territory. And her band is determined not to let that happen if it means unacceptable environmental degradation.

"When the Alaska Highway came through it changed our people in 20 short years and the LNG strategy that the government is proposing is the new Alaska Highway for our generation," she said. "I think it's important that I step up as a leader … to do the right thing for generations to come."

Her message to government and industry: "The Fort Nelson First Nation is governing their territory. We are the decision makers. We are the ones that are going to make the decision of what project goes through or not … we're not against development, but we do say no to bad ideas."

"Most definitely a line has been drawn and there's only one way forward – and that's a chief-to-chief meeting," she said.

If Ms. Clark wants to save her energy agenda, she'd better start there. 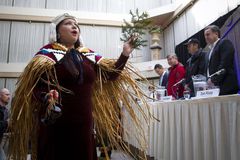 Vancouver has the most to gain from LNG, analyst says 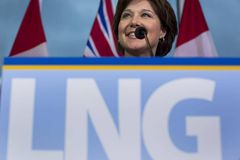