The arrow on the avalanche warning sign outside this small B.C. village pointed to orange on Friday afternoon, a sign of considerable risk, but many locals took to the surrounding hills in their snowmobiles. Riding the machines around McBride is a way of life.

On Saturday, residents of the village of about 600 were sombre as they grappled with the deaths of five snowmobilers the previous afternoon. The riders who died in the snow-capped foothills of the Rocky Mountains were from Alberta. The visitors had years of experience with their machines, were well-prepared and equipped.

At around 1:30 p.m. PT on Friday a wall of snow came down from Mount Renshaw, catching 17 people in an area that was nearly a kilometre long and wide. The mountain is a well-known spot for snowmobilers looking for open expanses to ride in the Robson Valley.

Avalanche Canada said the significant avalanche appeared to be human-triggered, but did not elaborate.

Mr. Chisholm's family said that he had a passion for sledding in the mountain. "He died too young doing what he enjoyed with his sledding buddies," they wrote. "Todd will be sadly missed by his wife of 18 years, children, mother and father, brothers and sister, extended family, friends and community."

The man, a resident of the Edmonton suburb of St-Albert, enjoyed the outdoor lifestyle offered by McBride. He was an avid hunter and fisherman according to his family.

St-Albert Mayor Nolan Crouse shared his condolences on social media on Saturday. "Losing a neighbour sad for all," he wrote.

Loranne Martin, McBride's mayor, said the region had experienced a "strange" weather year, which had created instability on the slopes. "Sledding on the mountains can be very rewarding, but it can also be very dangerous," she said.

"Our thoughts and prayers go out to the families. This is going to be a very difficult time for them."

Nestled in a valley between the Rockies and Cariboo Mountains, the village advertises itself as a "mecca" for snowmobilers. On McBride's Main Street, many large pickup trucks were hauling snowmobiles on Saturday and sporting license plates with Alberta's distinctive red lettering.

Locals are sticking together after the tragedy. One woman offered a bowl of chili for all impacted by the deaths. Others vow that snowmobiling will go on.

"It's what helped build us as a town. It's what helps keep our businesses open, and our school and hospital. We don't have mills, we have snowmobiling," said local Clint Traquair.

Sporting a sweatshirt with the logo of the local high school, Mr. Traquair is an avid snowmobiler. He says that more than half the people riding machines in the hills around the village are from nearby Alberta.

Speaking at a press conference on Saturday, Corporal Jay Grierson of McBride RCMP said that the 17 snowmobilers caught in Friday's avalanche were from four groups.

The snowmobilers were conducting a self-rescue – four of the deceased had already been dug out – as search-and-rescue technicians arrived. Everyone was accounted for and search efforts concluded the same evening.

Rod Whelpton, a search-and-rescue volunteer, said he was dealing with a mechanical failure with his snowmobile nearby when his friends went to a ridge and discovered the avalanche aftermath. They called for a helicopter and assisted in the rescue efforts.

"It was 700 metres across and approximately 700 to 800 metres long, with a bunch of people around," Mr. Whelpton said. "There were people in different groups, digging other people out."

While there was a risk to riding on Friday, Mr. Whelpton said there was nothing unusual about the day or weather. That's why he chose to ride.

Police and search-and-rescue called the snowmobilers calm, skilled and well-prepared, but noted it was uncommon for so many snowmobilers to be in such close proximity.

"I'm informed that this is unusual, that there would be so many people gathered in one area," Cpl. Grierson said. "This is a rather remote area; you wouldn't commonly see 20 snowmobilers in this small area at one time. We're speaking of a vast recreational area."

Avalanche Canada had warned of potentially risky conditions in the North Rockies one day before the event. On Thursday, a blog post noted that the primary avalanche problem for the upcoming weekend was persistent slabs on buried surface hoar.

"Areas like Pine Pass, Torpy, Renshaw, and possibly Tumbler Ridge have buried surface hoar in the mid-pack; my sense is this is a classic layer for concern," read the post by forecast co-ordinator Ilya Storm.

There was no formal avalanche warning. This year has seen generally good snow conditions, according to Avalanche Canada.

The condition is not inherently dangerous, but does require safe travel techniques, such as staying on level terrain, going one by one across a slope and limiting overhead hazards such as other parties, he said.

"Those are general rules that if you follow, they greatly reduce your risk regardless of the conditions and regardless of your level of experience," Mr. Klassen said.

"I'm concerned that there were so many people caught in a single avalanche. That's unusual. If five people are caught in an avalanche all at once, how did that happen?"

Cpl. Grierson said the community is reeling from the deaths. "We have people attend the area from all over the world. We develop relationships with them, we see the same people repeatedly," he said.

"This kind of thing affects local citizens. I've had outpourings of support. We just had a lady call up saying she made a bowl of chili for everybody, if they need [one]. There's a lot of support in this community."

The village of McBride is located about 210 kilometres southeast of Prince George, not far from the British Columbia-Alberta boundary.

Police were first notified when two separate GPS beacons were activated, prompting the force to notify the search-and-rescue group, which was on scene almost immediately.

Donita Kuzma, the regional coroner, said emergency officials initially believed there were four people killed, but the death toll rose to five as the RCMP on the scene spoke to survivors about who was missing from their group. Two coroners were dispatched to the area.

There were 192 avalanche-related deaths in BC between 1996 and 2014, with an average of 10 deaths per year, according to the B.C. Coroners Service. Forty-one per cent died while snowmobiling.

The majority of avalanche deaths occurred in B.C.'s Interior region.

A similar tragedy struck McBride in March 2014, when two Albertan men were killed while snowmobiling near the interior community. The avalanche claimed the lives of 36-year-old Curtis Fries and 29-year-old Thomas Hamilton, who were found under 4.5 metres of snow.

With a report from Allison Ridgway in Toronto.

Editor's note: An earlier digital version of this story incorrectly stated the name of a search-and-rescue volunteer. His name is Rod Whelpton, not Rob Whelton. As well, Thomas Hamilton was 29 years old. This version has been corrected. 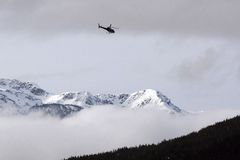 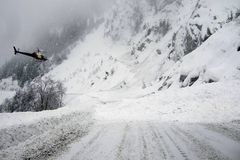 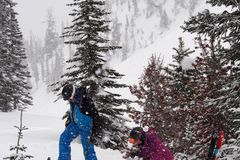