In Orlando, Fla., an unassuming building has become a model for mental-health care in North America.

The Belvin Perry Jr. Central Receiving Center serves as a single point of entry for those with mental-health and substance-use disorders, Jonathan Cherry, president and CEO of Florida's LifeStream Behavioral Center, told a room of international mental-health experts in Vancouver this week. The free-standing facility, named after a judge who championed its creation, not only simplifies the navigation of an often byzantine mental-health system, but diverts those who might otherwise have been taken to an emergency room – or jail – by police.

"If someone is having a mental-health emergency, police, family or whoever know to take folks to that single point of access," Mr. Cherry said. "The professionals are all there at that single point of access. There is a hospital there, there are stabilization units, detox units, outpatient therapies all over the city, but folks are assessed there, and it's determined what they really need."

Orange County estimates that the centre has saved taxpayers more than $50-million (U.S.) since it opened in 2003.

About 350 mental-health and disability experts from around the world are in Vancouver; there are also smaller meetings being held throughout North America. The conference comes as many North American jurisdictions shift mental-health treatment toward community-based care and away from institutions, emergency rooms and jails.

There is significance to Vancouver playing host. Two years earlier, the city's mayor and police chief declared a "mental-health crisis," noting that police officers had become de facto front-line mental-health workers. Since at least 2010, police apprehensions under B.C.'s Mental Health Act have grown year after year, increasing from 2,278 to 3,010 in 2014.

Vancouver police have asked for an urgent crisis centre on at least three occasions in the past several years, said acting Inspector Howard Tran, who is in charge of the department's mental-health portfolio.

"Emergency rooms were designed to deal with trauma, and not issues of mental illness and addiction," said Insp. Tran, who also spoke at the Community Crisis Response meeting. "For me, utopia would be if we built something like that next to the new St. Paul's Hospital site."

Mr. Cherry also spoke of the challenge in finding adequate community-based care following a shift away from institutionalization – a struggle that Metro Vancouver has also experienced with the closing of Riverview Hospital.

He told the room that in Florida, an estimated 55,000 people were in long-term psychiatric care some 60 years ago, when the population was about four million. Today, with a population of about 20 million, the city has only 600 long-term beds left, he said.

"Now, in order for anyone to access a long-term, in-patient bed, someone has to be discharged," Mr. Cherry said.

For outsiders, the relationship between the city of Vancouver, its police and its health authorities proved interesting. Vancouver Coastal Health's multidisciplinary Assertive Community Treatment (ACT) teams, for example, have police officers embedded with psychiatrists, counsellors and substance-abuse specialists, often meeting clients where they are.

Vancouver's five ACT teams currently work with 290 clients but have a capacity of 420.

In a study of 80 ACT clients, Mental Health Act apprehensions and violent offences both dropped by half, the city said Wednesday. There was also a 71-per-cent reduction in street disorders.

"I thought it was really impressive, the way that people were working together," said Sarah McClinton, director of mental health, disability and dementia at Britain's Department of Health.

"I thought that there were some strong partnerships and people are really starting to think together about what the common vision is." 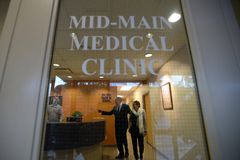