Andrew Weaver was teaching a class of University of Victoria undergraduates about climate science and public policy when he realized he needed to do more than just lecture.

The internationally recognized climate scientist, who was part of a team that shared a Nobel Peace Prize with Al Gore, often asked students whether the present generation owed anything to future generations in terms of the environment it leaves behind.

Students usually agreed that their grandchildren deserved an Earth free of the worst impacts of climate change. But when Mr. Weaver asked whether they voted, they replied their votes didn't count or that politicians were all corrupt.

Read more: BC NDP Leader John Horgan hopes to make a premier of himself

"You have the power to change the system," he remembers telling students. "If you're not engaged in it, you have no one to blame but yourself." But MR. Weaver could only say those words for so many years without taking action himself.

He had spent decades contributing to science that proved climate change was real and it was primarily human-caused. As part of the United Nations' Intergovernmental Panel on Climate Change, he'd authored multiple reports that showed clear scientific consensus on the issue.

Mr. Weaver had advised former Liberal premier Gordon Campbell on his groundbreaking climate plan, which included Canada's first carbon tax. But he watched as politicians from all sides attacked the plan.

When he was asked a fourth time to run by former Green leader Jane Sterk, Mr. Weaver said yes.

He didn't expect to win in Oak Bay-Gordon Head in 2013, but he became the first Green elected to the B.C. legislature. He is a prolific writer of private member's bills that have sometimes attracted Premier Christy Clark's support, including a proposal to ban mandatory high heels for restaurant servers.

Although he doesn't see politics as a career path and has called for term limits for legislature members, Mr. Weaver has a knack for the political game. Despite leading a third-place party, he's managed to grab a disproportionate amount of media attention.

Mr. Weaver's friends say he is unusual in politics because he makes decisions based on evidence rather than on partisanship. Elizabeth May, the federal Green Party Leader, said she was stunned by how well he spoke to voters.

"I was realizing, 'Good heavens, Andrew's actually going to be good at this,'" she recalled with a laugh. "I was kind of worried: Could a scientist make this leap? Science, in some ways, is kind of the opposite of politics. You have to be evidence-based."

In fact, it appears his scientific background has shaped his entire approach to politics. Ms. May recalled a controversy surrounding a company that had been issued a permit to dump contaminated soil near Shawnigan Lake on Vancouver Island.

"What does a scientist do? Picks up his test tubes, goes to Shawnigan Lake and tests the water," Ms. May said. "He gets his information and his evidence lined up before he takes a position on something." Mr. Weaver found elevated levels of heavy metals, although the Environment Ministry has said their testing never showed contamination above the legal limit. After years of community opposition, the province cancelled the permit in February.

Mr. Weaver said his scientific training has shaped how he works with staff and candidates. He doesn't micromanage them, he said, because the secret to success in science is to surround yourself with the smartest people you can find and let them go.

"He really believes in the people around him," said Adam Olsen, the Green candidate in Saanich and North Islands and a former party leader. "When I come up with an idea, he says, 'Adam, you go with full force at that. I'll be happy to support you.'"

Mr. Weaver, 56, is on leave from the University of Victoria. He's authored 16 scientific papers since he was elected.

Michael Eby, a climate scientist at the university, described his long-time boss as a talented salesman skilled at securing grants.

"You have to be a very positive, proactive and hard-working individual to be able to keep promoting yourself and the work that you're doing," Prof. Eby said. "He's very good at it."

BC NDP Leader John Horgan hopes to make a premier of himself
April 14, 2017 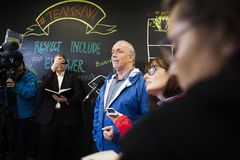 B.C. eagerly anticipating federal bill legalizing marijuana
April 12, 2017
Clark lays out simple election theme - economy - as B.C. campaign starts
April 11, 2017
Report an error
Due to technical reasons, we have temporarily removed commenting from our articles. We hope to have this fixed soon. Thank you for your patience. If you are looking to give feedback on our new site, please send it along to feedback@globeandmail.com. If you want to write a letter to the editor, please forward to letters@globeandmail.com.
Comments