The former CEO of North America's largest hospitality business was on prescription drugs for anxiety and stress and grappling with a friend's stubborn Doberman when he was caught on video last summer kicking the dog and pulling it up on its leash, his sentencing hearing for animal cruelty heard on Wednesday.

Desmond Hague, CEO of South Carolina-based Centerplate Inc. until he was forced to resign last year over the controversy, also had other personal issues during the incident on a visit to Vancouver, according to new details disclosed on Wednesday.

Mr. Hague was fined $5,000 and barred from owning an animal for three years – a penalty jointly recommended by the Crown and defence and accepted by Provincial Court Justice Frances Howard.

"It was a momentary lapse of judgment that has caused him numerous collateral consequences," Justice Howard told the court after an hour of submissions from the Crown and defence as 47-year-old Mr. Hague looked on, sitting beside his counsel.

The video, leaked to the B.C. Society for the Prevention of Cruelty to Animals, was broadcast around the world, causing a firestorm of controversy that consumed a business career in which Mr. Hague earned at least $4.7-million a year from Centerplate and other business enterprises, the hearing was told. Mr. Hague had to resign from Centerplate, which has 40,000 employees serving sports, entertainment and convention centre operations, including BC Place.

He also had to give up his other business interests and remains unemployed.

"Mr. Hague accepts full responsibility for his conduct. He has done so since the very beginning," said Judge Howard, who made reference to 17 letters of support from associates of Mr. Hague, including former Centerplate colleagues. "He has acknowledged wrongdoing without reservation."

Mr. Hague also stood and apologized for his conduct. "Clearly, this is something I am very sorry about and I can assure the court these incidents will never happen ever again," he said.

The hearing was told that in addition to the prescription drugs, Mr. Hague had alcohol in his system, a combination that may have affected his judgment. He was also grappling with a situation involving a close family member, then had to deal with the five-month old dog, which a friend sent him to walk in downtown Vancouver.

The dog was not leash trained, bolted with such force that it injured Mr. Hague's right hand, and stopped so he had to carry it back to the condo from a walk near the Vancouver Art Gallery, court was told.

Then Mr. Hague came into the condo elevator where he was on video, and, over 48 seconds, kicked the dog five times, according to Crown attorney Jim Cryder – three of the kicks "very hard," and then pulled the dog up on its leash.

But the court was told the dog was on a full-body harness that supported its weight, so it did not suffer any choking when Mr. Hague yanked it up – a moment shown on the video that was screened in court.

Mr. Cryder said the video was "alarming," but the abuse was at the "lower end of the spectrum" compared to other cases, and the dog did not suffer physical harm. However, he noted, "It's still a violent act against a vulnerable animal."

Mr. Hague's lawyer, Leonard Doust, said Mr. Hague's career has ended and his notoriety has basically made him unemployable. "His life has been, perhaps, permanently altered," he told the court. "Not only has he suffered the shame and embarrassment and regret as a result of his actions, but he has also suffered very serious financial losses." He said it was unclear when his client would ever be employable again.

He noted the owner of the dog has accepted his apology

After the incident, Centerplate said Mr. Hague would donate $10,000 to establish a foundation in the name of the dog, and volunteer 1,000 hours to community service related to animal welfare.

Outside the courtroom, Mr. Doust declined to say whether Mr. Hague had done so before he left Centerplate. 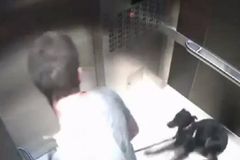