Fort McMurray is not rebuilding in a way that would best shield the city from natural disasters such as floods and fires because of a push to ensure the recovery is done quickly and cheaply, according to an independent review of the city's response to the 2016 wildfire.

The report, prepared by KPMG and released on Thursday, detailed gaps in Fort McMurray's emergency preparation plans and forest management practices prior to the fire. And now, the city is not enforcing its own bylaws and residents are not always choosing the materials that would protect their homes, the report concludes.

The fire forced 88,000 to flee from Fort McMurray and surrounding areas in May of last year. It destroyed 1,595 buildings, which contained 2,600 housing units, and triggered almost $4-billion in insurance claims. The city started rebuilding in June, 2016, and the process is expected to take another three to four years.

Read more: Will wildfires get too intense to fight?

As part of that process, local lawmakers rolled out policies designed to "build back better." This strategy, however, has been trumped by a push to contain costs and speed up the recovery, the report said. Further, the review suggested the Regional Municipality of Wood Buffalo, which includes Fort McMurray, should consider tax rebates so folks rebuilding can afford to build more resilient structures.

For example, the report highlights what happened in Waterways, a riverside neighbourhood hit hard by the wildfire.

After the fire, Fort McMurray passed a bylaw to buy out some properties on a high-risk slope, yet allowed four properties within the zone to rebuild, the report said. Further, council approved a bylaw allowing reconstruction in a flood area in Waterways without implementing flood mitigation measures.

"This is an example of where the need for timely recovery may have been prioritized over the principle of building back better," the report said.

Insurance companies and other programs provided money for residents to rebuild homes and infrastructure, but payments were generally capped at an amount that would return structures to pre-fire conditions, KPMG said. In turn, residents would be on the hook for costs associated with rebuilding in a safer location or purchasing fire-resistant products. That means those two things aren't always happening.

"This financial burden represents a significant barrier to residents, as many are unwilling or unable to pay out-of-pocket for upgraded and less flammable materials," the report said. "Consequently, it is unlikely that most structures will be built back better."

The firm recommended implementing policies that would support "building back better," such as tax rebates for folks using fire-resistant materials.

The KPMG report found Fort McMurray's previous attempts to mitigate fire damage lacking. For example, the city's adherence to FireSmart, an established program that contains a number of strategies such as cutting down trees and educating citizens to best protect communities from wildfires, fell by the wayside.

"Vegetation management, education and planning disciplines of FireSmart may not have been implemented consistently or sustained over time," the report said. There was a "gap" in managing vegetation between 2012 to 2016, KPMG said, but noted "it was reported" these activities happened outside Fort McMurray's $290,000 FireSmart government grant.

Mayor Melissa Blake said prior to the disaster the FireSmart program struggled in part because residents resisted changes in their community.

"Every time we look at taking a tree down, we get 100 complaints on what the impact on the neighbourhood will be," she told reporters Thursday.

"We had an awful lot going on in that same time period in terms of growth," she said. "Now, we have an economic downturn that has an influence."

FireSmart grants, she said, were "significantly less" prior to the fire than now. Indeed, KPMG noted the regional municipality now has a three-year FireStart plan with a $14-million budget. The fire and its fallout, Ms. Blake said, has made residents open to FireSmart's tree removal plan.

"Our acceptance level right now in this community is so much higher because of the actual experience."

The Fort McMurray fire is among several recent especially bad fire seasons in recent memory, in Alberta and elsewhere, amid research that shows changes in the climate have increased the frequency and severity of destructive wildfires.

B.C. is currently under a state of emergency after a sudden increase in the number of fires across the province earlier this month, which have destroyed dozens of homes and forced evacuations affecting tens of thousands people.

The single-largest evacuation order, which covered about 10,000 people who live in the community of Williams Lake, was lifted on Thursday, although the city remains on alert to leave again at a moment's notice. The provincial government has been making payments of up to $1,200 to evacuees, and earlier this month the Canadian Forces deployed personnel to the province to help. 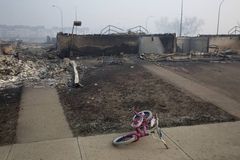 Alberta Wildrose leader says province is whitewashing Fort McMurray wildfire findings
June 9, 2017
Follow Carrie Tait on Twitter @CarrieTait
Report an error Editorial code of conduct
Due to technical reasons, we have temporarily removed commenting from our articles. We hope to have this fixed soon. Thank you for your patience. If you are looking to give feedback on our new site, please send it along to feedback@globeandmail.com. If you want to write a letter to the editor, please forward to letters@globeandmail.com.
Comments