Pope Francis may be taking a tough stand against income inequality, but he sees merits to the current system of capitalism, says the head of British Columbia's socially conscious credit union, Vancity.

Tamara Vrooman, president and chief executive officer of the 68-year-old B.C. financial institution, came to this view from meeting the Pope and his representatives at a conference in Vatican City earlier this month.

"One of the things that certainly his cardinal and the people that we met with from the Vatican said, and I think [the Pope] reinforced in his comments to us, is that he acknowledges the current global economic system has produced a lot of benefit for a lot of people," Ms. Vrooman said in an interview.

"… However, it's fundamentally at risk and not in the place that it should be because it excludes more people than it includes at the moment."

In public remarks, the Pope has expressed concerns about income inequality, suggesting at one point that it's intolerable that the world's financial markets determine people's fates rather than serve their needs.

Ms. Vrooman said the Pope's comment that the economic system is "not all bad" was one that she had not heard before.

For two days, the former B.C. deputy finance minister was among scholars, business representatives and representatives of international organizations talking about income inequality in meetings, and over a lunch of risotto and beef, where they were joined by Pope Francis. Most of the discussion was by the participants, with Vatican officials looking on and listening.

The Global Common Good: Towards a More Inclusive Economy, hosted by Cardinal Peter Turkson, was organized by the Pontifical Council for Justice and Peace as well as the Second Section of the State Secretariat, which deals with international and economic matters. It was held on July 11 and 12.

Ms. Vrooman also met the Pope amid the meetings in a room she compared to a mini-legislature.

"Think receiving line," she said, describing her personal papal encounter. "I was able to meet him, to introduce myself to him and to thank him for convening this meeting, which gave me an opportunity to talk about the work that Vancity does. He was very kind and thanked me for the work that we're doing and urged me to continue to do it, and thanked me for attending."

She said he seemed very grounded. "With all of the beauty and splendour of the Vatican City and of Rome itself, with its beautiful old buildings and its vibrancy and with the structure and hierarchy and pageantry of the Catholic Church itself, the Pope was a very calm, humble, informal, genuine, lovely man," she said. "He seemed genuinely interested in the people he met and the work that we were doing, and spoke quite directly and simply and passionately about his view of why this work is important."

Ms. Vrooman found herself at the Vatican given Vancity's focus on social responsibility and environmental sustainability, which have evolved since the operation was launched in 1946 by 14 Vancouverites seeking accessible financial services.

"It's a little bit of one of those pinch-yourself moments as you're standing in line waiting for the Pope to come and greet you in the middle of Vatican City," she said. "It's not a place that I genuinely ever expected to be." 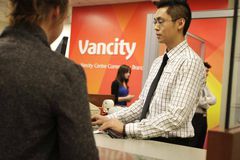 Vancity credit union decides against expansion outside of B.C.
May 7, 2014 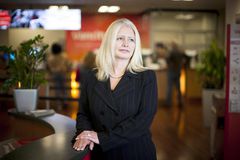 Vancity head to advise Pope on the economics of peace
May 6, 2014