The former CEO of the Vancouver Olympics says allegations that he physically and sexually abused students when he was a gym teacher are "absolutely not true."

Journalist Laura Robinson, author of two articles that contained the allegations, has sued John Furlong for defamation. She says he accused her of shoddy reporting and having a vendetta, and implied she tried to extort him when he said in a news conference he had been told a story could "go away" for a payment.

In his first day of testimony in the defamation case, Mr. Furlong told the B.C. Supreme Court he did not intend to suggest the reporter tried to get money from him.

Mr. Furlong, who led the 2010 Games, was the subject of a lengthy article by Ms. Robinson in the weekly newspaper Georgia Straight in September, 2012. The physical-abuse allegations in the article stemmed from Mr. Furlong's time as a gym instructor at Immaculata Roman Catholic Elementary School in Burns Lake, B.C., from 1969-70.

The defence opened its case on Monday, as the trial entered its second and final week, with Mr. Furlong as its first witness.

Mr. Furlong testified he and his family have suffered greatly since the Georgia Straight story was published. He said he was humiliated and essentially became a shut-in. He said all but one of his speaking engagements was cancelled, costing him hundreds of thousands of dollars in lost income. He said he has seen two therapists and been diagnosed with stress disorders.

Mr. Furlong told the court that after his wife heard a man make a derogatory remark while reading a newspaper story about Mr. Furlong, she suggested the couple head to their home in Ireland.

Mr. Furlong's wife was killed in a car accident in Ireland in April, 2013.

"We were in Ireland when we should have been here, because she wanted us to be away from this," he told the court.

John Hunter, Mr. Furlong's lawyer, asked if the allegations of physical and sexual abuse Mr. Furlong referred to at the news conference were true.

"They were absolutely not true, not ever," he replied.

Mr. Furlong testified that in 2009, he was told a Vancouver Olympics employee had been approached by a person who claimed Mr. Furlong had struck her when she was his student. Mr. Furlong said the employee told him he believed the matter could go away for $5,000. He did not explain how the employee reached that conclusion.

Mr. Furlong said the matter stunned him and he reported it to the Vancouver Police Department.

Bryan Baynham, Ms. Robinson's lawyer, in his cross-examination questioned Mr. Furlong about the extortion remark. Mr. Baynham asked if Mr. Furlong deliberately implied Ms. Robinson had tried to extort him. Mr. Furlong said he did not.

Mr. Hunter, in his opening statement, said Mr. Furlong was entitled to respond to the attacks against him.

Ms. Robinson has defended her work, pointing to the fact she obtained sworn affidavits from eight people. 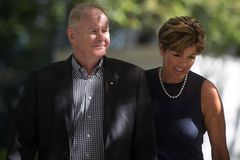