That British Columbia is an international embarrassment when it comes to the rules, or lack of them, around campaign financing is accepted fact now.

Yet we continue to discover just how unsavoury many of the practices that are allowed to exist in what we call a functioning democracy truly are.

On the weekend, a Globe and Mail exposé revealed how lobbyists, for one, are running roughshod over the laughingly lax laws that exist around political donations. And as much as we have known that pretty much anything goes when it comes to this issue in the province, it is still shocking to learn just how bad things are.

The Globe investigation found lobbyists and others have been donating multiple times in their own name, while being reimbursed by companies they represent. This practice is a clear breach of one of the few rules that do exist when it comes to campaign donations: it is illegal to give money that didn't come from a donor's own pocket.

This appears to be happening all over the place here, with authorities unable to detect or stop it.

The lobbyists often make the contributions in the form of buying tables at party fundraisers. It is, quite simply, the cost of doing business in B.C. where the governing Liberals raked in $12-million in fundraising dollars last year alone. No wonder they have refused to change the fundraising laws to bring the province in line with other jurisdictions not only in Canada but around the world.

The Liberals are prepared to endure any amount of public shaming and global ridicule necessary to maintain a system that is deceitful and morally bankrupt. It is about keeping power and only keeping power.

Some of the observations made by those The Globe talked to as part of its probe are remarkable in their candour. (Given how politics is played in the province it's understandable many wanted to keep their identities protected). The conclusion many of these people have reached about what is going on in the province seems to be a shared one.

What takes place in B.C. is a legalized form of extortion, many of them believe. If you, as a lobbyist, hope to make any inroads on behalf of your clients you'd better be prepared to pony up personally to the ruling party and also be ready to act as a conduit for fundraising dollars from your clients. This is taking place routinely.

Just think about this: lobbyists giving the governing Liberals fundraising dollars with one hand, and then taking money from their clients to cover their fundraising outlays with the other. Meantime, they are getting a tax break for their donations – one subsidized by the public. And it defies belief the Liberals haven't been aware of this practice.

Did anyone, for instance, think that the 89 donations totalling nearly $70,000 that lobbyist Mark Jiles made since 2011 were all from his wallet? That he did this out of the goodness of his heart? Right. Everybody in B.C.'s political circles knows how the game is played because it's been played this way forever.

Of course, this would not be allowed to happen if B.C. had the kind of campaign finance laws that most places do. Laws that place restrictions on how much a person can contribute in a given year. Only in B.C. are there no limits on this type of political activity which, in turn, allows Mr. Jiles and others to donate as much as they want on behalf of themselves and their clients and no one even notices – or cares.

It's a system that works for Mr. Jiles, works for his clients but also works for the governing Liberals, which is making a fundraising killing under the toothless and impotent campaign finance rules that exist in this province. The Opposition New Democrats, meantime, have pledged to ban union and corporate donations if they get into power and also place limits on how much individuals can donate.

Elections BC must rigorously investigate the Globe's findings. It is quite evident – some of the players even admit it – that laws have been ignored or contravened. If the body governing political donation laws in the province isn't going to take this matter seriously then let's just get rid of what little stands for the rules we have now.

When it comes to campaign finance, B.C. is no better than a banana republic – actually maybe worse. 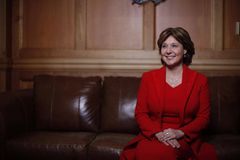 Donations taint B.C.'s approval of Trans Mountain pipeline expansion: advocacy groups
January 31, 2017
B.C. Premier Christy Clark defends cash-for-access events
January 27, 2017
Follow Gary Mason on Twitter @garymasonglobe
Report an error Editorial code of conduct
Due to technical reasons, we have temporarily removed commenting from our articles. We hope to have this fixed soon. Thank you for your patience. If you are looking to give feedback on our new site, please send it along to feedback@globeandmail.com. If you want to write a letter to the editor, please forward to letters@globeandmail.com.
Comments