When the Sea to Sky Highway was reconstructed for the Olympics, the government considered paying for the $600-million upgrade through a toll.

But that idea died early. Tolls aren't popular with the public in general, and tourism operators in Whistler didn't fancy the idea of having a toll gate looming like a barrier between Vancouver and the ski hill.

So it became a toll-free highway.

Laila Yuile, a provocative writer and blogger who keeps a close watch on the B.C. government, has been drawing attention to documents that indicate a "shadow toll" exists on the dramatically scenic highway that links Vancouver to Whistler.

Although the government rejects that label, officials acknowledge that over the next 25 years, the province will pay about $75-million of public money to the Sea to Sky partnership that undertook the project.

And part of that money will be based on traffic volume.

Ms. Yuile has been stirring debate by arguing that, in effect, this is a hidden toll on the highway, and that it has been hung around the necks of unwitting B.C. taxpayers.

"There are shadow tolls - and they don't want the public to know about it," she said.

When government officials rejected her assertions, Ms. Yuile dug up persuasive evidence to the contrary, including a June news release by Transtoll, a company that has a contract with Sea to Sky Highway Investment Ltd. Partnership to provide traffic counting technology for the road.

"The accuracy of the traffic counting system is extremely important on the Sea to Sky Highway because the roadway is financed through a shadow tolling scheme," Dan Toohey, executive vice-president of Transtoll said in the release.

As well, an annual report by Macquarie Bank lists the Sea to Sky Highway as one of eight "toll roads" it has invested in.

And Nicholas Hahn, managing director of Macquarie North America Ltd., admits the phrase may have passed his lips.

Strictly speaking, however, he said it's not a "shadow toll" but a complex contractual arrangement with the province that uses incentive payments to ensure the highway is maintained at a high standard throughout the 25-year life of the contract.

Mr. Hahn, who is based in Vancouver, said there are four components to the contract. One paid a bonus to the consortium to keep the highway open as much as possible during construction, and a second rewards the operator for keeping the road open now that it's built. If a bridge breaks down or the pavement cracks, causing traffic delays, the contractor pays a penalty to the government.

Two other "targeted payment regimes" apply to the operation of the highway. One is a "safety performance payment" that basically rewards the company if the Sea to Sky Highway has fewer accidents than similar roads in B.C.

And then there is an incentive payment tied to the number of vehicles that use the road.

"Now those vehicle usage payments - I've heard them described as a shadow toll, I've probably even used the term shadow toll myself in the past - they are not really a direct shadow toll because we don't get an amount of money for every vehicle that uses the road," he said.

Under the deal, the government pays a set amount when certain traffic levels are reached, but the payments fall as traffic numbers climb.

So even if you do call it a shadow toll, it's a shadow that fades away as vehicle use increases?

Peter Milburn, deputy minister of Transportation, said "shadow toll" is not a term he would use. But he acknowledges the private consortium will get incentive payments of about $75-million over 25 years depending on safety performance targets and vehicle use.

So, it is a toll, but it's invisible to the public, and the government doesn't have to wear it because it can be described as something else. Talk about creative bookkeeping. 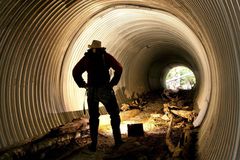 Tunnel was considered for landslide highway stretch
August 18, 2008
Deal reached over Sea-to-Sky lands
September 13, 2008
Follow Mark Hume on Twitter @markhumeglobe
Report an error Editorial code of conduct
Due to technical reasons, we have temporarily removed commenting from our articles. We hope to have this fixed soon. Thank you for your patience. If you are looking to give feedback on our new site, please send it along to feedback@globeandmail.com. If you want to write a letter to the editor, please forward to letters@globeandmail.com.
Comments