In the video, the grizzly bear is first shot as it wanders along a hillside, its easy pace suggesting its obliviousness to nearby threats.

"You missed him," says a voice off-camera. "Or you shot through him. Shoot him again."

A few more shots ring out. The bear turns in fevered circles, kicking up dust.

"You hit him, both times. He's spinning."

Before long, the dying bear is rolling down the snow-covered hill, its paws flailing, leaving a trail of blood in its path. The men filming erupt with laughter and congratulatory hoots.

The graphic, two-minute video has garnered more than 1.2 million views in two days, eliciting widespread backlash reminiscent of the outcry following the killing of Cecil the lion in Zimbabwe. It has also renewed calls to end the grizzly hunt as British Columbia prepares to open its fall season on Oct. 1. First Nations groups have vowed to do "whatever it takes" to stop the hunt on their territory.

Neighbouring Alberta ended its grizzly hunt in 2006 due to the bears' dwindling population.

Tommy Knowles, campaign director for the Vancouver-based Wildlife Defence League (WDL), said the group found the video posted on a hunter's Facebook page about a year ago and began using it in internal presentations. On Monday, the group posted it publicly to its own Facebook page.

The WDL cannot confirm where the video was filmed – it suspects near Bella Coola – but says the location is irrelevant.

"It's absolutely horrific," Mr. Knowles said. "It's completely unethical, completely inhumane. It's a bear being shot over and over again, sliding down a mountain, bleeding out."

Even professional hunters have condemned the actions depicted in the video, insisting it does not represent the activity. Mark Werner, past president of the Guide Outfitters Association of B.C., said it is a hunter's responsibility to ensure a clean, humane kill.

"Our hunters value organic meat more than ever before and it's a big part of our culture," he said. "But we try to harvest it in the most sustainable, humane way possible. It's a hunter's responsibility to be sure their firearm is accurate, that they have the right firearm, the right ammunition, that they've practised."

Mr. Werner, who has not seen the video but has heard a description of it, continued: "They were making bad comments, they're sensationalizing the suffering of an animal. We don't endorse that. That's not what we're about, and I'm disappointed."

But Chief Doug Neasloss, of the Kitasoo/Xai'xais First Nation, is skeptical of the government's estimates, having worked as a bear-viewing guide for more than 14 years. "It's certainly not 15,000. I would say it's not even close to that."

In 2012, First Nations on British Columbia's north and central coasts formed an alliance and declared a ban on trophy bear hunting. While the province has not recognized it, Mr. Neasloss says that awareness campaigns and field patrols have had some success. "Every community from the top end of Vancouver Island up to Prince Rupert and over to Haida Gwaii has a Coastal Guardian Watchmen program that gets out and monitors their territory," he said. "For six months out of the year, we're out there every day." The Wildlife Defence League also has a handful of volunteers currently in the field working to deter hunters.

Most efforts have been pro-active, aimed at stopping hunters before they arrive, Mr. Neasloss said. "If we seem them in the field, we'll pull up and educate them: There's a ban on trophy hunting and it's not supported up here."

Mr. Neasloss says that most hunters they approach oblige, but that sometimes further enforcement is necessary: "Driving, stopping them from shooting the bears, scaring the bears away, bringing a film crew to film the whole thing," he said. "We're prepared to do whatever it takes to make sure it doesn't happen in our territory." 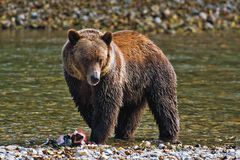