It's been 15 years since the armed 31-day standoff over aboriginal title at B.C.'s Gustafsen Lake, but Wolverine remains as steaming mad as ever.

The crusty Shuswap elder - formally Jones William Ignace - spent five years in jail for his role in the occupation of a patch of wilderness, serving the toughest sentence handed out. After his release, he returned to his home outside Chase, B.C., where this week he interrupted work in his potato and squash fields to talk about the dispute that led to a handful of spiritual dancers, drummers and activists confronting 400 heavily armed police backed by the Canadian Forces.

Barely controlling his anger, Wolverine sat at his kitchen table, cigarette butts spilling out of an oversized ashtray, and lashed out at police, politicians, courts, the media and elected band chiefs involved in land-claims negotiations.

"They are not hereditary chiefs," he said. "They should be negotiating to protect our rights, not to take them away." He said native people should stand up. "Who are the real terrorists in this country? We are freedom fighters, not terrorists."

Gustafsen Lake left a complicated legacy: It galvanized a generation of first nations activists and the RCMP, while having little effect on land claims.

For native activists, Gustafsen Lake has turned into a rallying cry, passing into native folklore on par with Quebec's Oka confrontation and Ontario's Ipperwash and Caledonia occupations, says John "Splitting the Sky" Boncore.

"At Gustafsen, we raised the bar," said Mr. Boncore, who led the sundance at the campsite before the occupation. "In the long run, if there is a disturbance at the grass-roots level and people who are not content with what is going on start to assemble, the government now fears another Gustafsen uprising."

The lessons of Gustafsen will be put to the test as first nations in B.C. threaten to blockade tankers associated with Enbridge Inc.'s proposed Northern Gateway pipeline. On a second front, a band chief recently said she was prepared to blockade a road in her wheelchair, carrying a shotgun, to halt the proposed Prosperity mine at Fish Lake.

Interviews this week with several people involved in Gustafsen Lake indicated little has changed in the difficult issues at the centre of the dispute, which occurred in a remote spot about two hours' drive south of Williams Lake, B.C.

Public interest in the message raised by those who occupied the lakeside campsite is minimal, and the impact on treaty negotiations is imperceptible. The local Canim Lake band, who did not support the occupation, has spent the past 15 years at the negotiating table without reaching even an agreement-in-principle on its land claim.

The provincial government responded to the political action as if it was no more than criminal trespassing. The events had no impact on government policies, Michael Harcourt, who was premier at that time, said in an interview this week.

But it was a turning point for the RCMP, deputy commissioner Gary Bass said in an interview. "Relationships built out of [Gustafsen Lake]continue to grow. It's not perfect yet but they are very good," he said. "Our relationships and trust are such that the chances of another Gustafsen happening [in B.C.] are significantly lower."

Gustafsen helped him understand that confrontations with first nations could be avoided, he said, and "in 15 years, we have never had another major confrontation in this province."

Over the years, the RCMP have developed several protocols for alternative approaches to policing. The list includes agreements on the investigation of all 14 residential schools in B.C., on an approach to deal with historic abuse and violence in the community and on wildlife offences.

A protocol with the Alkali Lake Indian band outlines responsibilities of the RCMP and of the community if a band member comes forward with a complaint. Under another initiative, the RCMP have agreed to include a band member as an observer of an investigation into an officer shooting.

A wide-ranging protocol on public safety co-operation was developed in B.C. and accepted nationally. The protocol is intended to identify situations that could lead to crisis, provide for exchanging information on how to prevent it and facilitate debriefings during or after a conflict.

The RCMP has received several calls in recent years advising them that a blockade is going to be set up. If the Mounties are assured that the protest will be peaceful, they will come in "soft hats" and not with the Emergency Response Team, deputy commissioner Bass said.

The Gustafsen confrontation occurred after about 20 natives refused to leave the property of rancher Lyle James. Tensions peaked on Sept. 11, when thousands of rounds of ammunition were fired after a vehicle driven by activists was blown up by an explosive device buried in the road. The occupation ended peacefully six days later. Fourteen natives and four non-natives were convicted on charges related mostly to trespassing. Wolverine was found guilty of assaulting a police officer and discharging a firearm.

This week, as his fury eventually wound down in the interview, he brought out a bright scarlet sachet with a heavy RCMP medal on its front - a reflection of the Mounties' efforts to reach out to natives, even to Wolverine.

"The police gave me this bag with tobacco, for peace," he said. "A few years after I got out."

Faces of a standoff

A member of the Shuswap Nation, Mr. Ignace was identified in court as the apparent leader of the armed standoff in 1995. He says he joined the occupation at the Gustafsen Lake campsite to assert aboriginal rights to land that was neither ceded nor purchased. The rights of indigenous people have been entrenched in law six times beginning in 1704, he says. On Sept. 11, he came running when he heard an explosive blow up a pickup truck. As two people in the truck fled the scene, shots rang out. He fired back. He also tried to stop an armoured personnel carrier by firing into the power-steering unit. He was sentenced to eight years and released on parole after five. He remains active in native-rights campaigns, travelling to speak about his experiences and his perspective on aboriginal law. He lives outside Chase, B.C.

Part Mohawk from the eastern United States, Mr. Boncore led the ritual sundance ceremony in early July, 1995, that evolved weeks later into the standoff with police. He left the group in mid-August, as public attention focused on outside agitators at the campsite. Last year, Mr. Boncore tried to arrest George W. Bush for war crimes while the former U.S. president was in Calgary. He was convicted of obstructing a peace officer and given a conditional discharge. In 1971, he had been convicted of attempted robbery and was sent to Attica State Prison days before a riot that resulted in the death of 11 guards and 32 convicts. He was subsequently convicted of second-degree murder of a guard. He served seven years in prison before he was released on an appeal. In recent years, he has been acting in movies, playing small roles, most recently in The Last Rites of Ransom Pride.

He was an inspector at the time of the occupation. He went up to Gustafsen Lake in mid-July to co-ordinate the investigation and remained throughout the standoff. He was also involved in the subsequent court cases against 18 people involved in the standoff. He joined the RCMP in 1971, but Gustafsen Lake was his first major involvement with aboriginal communities in his career. After Gustafsen, he was in charge of the major crime section for RCMP "E" division, while police investigated allegations related to residential schools. He was appointed to his current rank of deputy commissioner, Pacific region, and commanding office of E Division in B.C. in December, 2006.

As the elected chief of the Canim band at the time of the standoff, Mr. Archie was involved in attempts to negotiate a resolution of the conflict. The occupation did not have local support, he says, adding that only three of those at the campsite were from his band. Most were from much farther away; some were supporters who were not aboriginals. He was disturbed by the sundancers breaking a promise to leave the site after completing their ritual. "They gave their word," he says. At one point, he invited Ovide Mercredi, who was then head of the Assembly of First Nations, to try to negotiate a resolution of the confrontation. But Mr. Mercredi failed to win their trust. Mr. Archie was critical of the show of force by police, believing it was out of proportion and unnecessary. The group of about 20 people could have been taken out peacefully, he says. He is now health director for the band.

How the RCMP sought trust after Gustafsen Lake
May 2, 2018 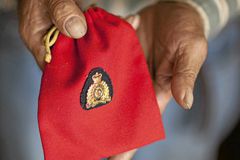