British Columbia Premier Christy Clark was at Buckingham Palace on Tuesday where the Queen recognized the creation of the Great Bear Rainforest – Canada's contribution to the Queen's Commonwealth Canopy initiative to preserve indigenous forests.

But back home, the chief of a community in the same territory has spent the last month battling an oil spill from a sunken tug, which has contaminated traditional seafood resources. Heiltsuk Chief Marilyn Slett slammed the Premier for ignoring the disaster while promoting the region as a tourist destination during her visit to London.

Even with broad support for the Great Bear Rainforest land use agreement among the First Nations who live in the region, anger over issues ranging from trophy hunting of bears to the proposed transport of crude oil and liquefied natural gas in the surrounding waters has highlighted tensions within those groups.

Dallas Smith, the signatory on behalf of the Nanwakolas Tribal Council, promoted the Buckingham Palace event on Twitter, declaring it a "great recognition for all of us who work, live and play" in the Great Bear Rainforest. Mr. Smith has stepped down from his leadership role on the council as he runs for a seat in the B.C. legislature for Ms. Clark's Liberal party in the upcoming spring election.

The other major indigenous group in the Great Bear Rainforest is the Coastal First Nations, led by Chief Slett. For the past month, her community has been working to contain the environmental impact of a sunken tug.

"We supported and endorsed the Great Bear Rainforest land use agreement. We worked on it for many years," Chief Slett said in an interview. "But here we are on the front lines of an oil spill in the heart of the Great Bear Rainforest, and not hearing from the Premier at all in this process, it's unsettling. It's not where we should be in this relationship."

The tug boat Nathan E. Stewart ran aground on a reef near the Heiltsuk community of Bella Bella on Oct. 13, spilling more than 107,000 litres of diesel and 2,240 litres of engine oils into the Seaforth Channel. It took 32 days to remove the stricken vessel from the reef.

The Premier has been to Bella Bella twice this year to celebrate events marking the creation of the land use agreement, most recently in September when the Duke and Duchess of Cambridge unveiled a plaque adding the Great Bear Rainforest to the Queen's Commonwealth Canopy.

At the event at Buckingham Palace, the Queen recognized the contributions of 20 Commonwealth countries to her Canopy initiative. The Great Bear Rainforest was singled out and Ms. Clark was granted a private audience with the Queen and Prince Philip because, at 6.4 million hectares, it is the largest addition of protected forest land to the Canopy.

Chief Slett said the Heiltsuk, having played host to the Premier in Bella Bella, are devastated by her silence during the intense recovery efforts of the sunken tug over the past month. Many families would be harvesting clams right now in Gale Pass, but the fishery has been closed due to the spill.

"That is our breadbasket," Chief Slett said. "People are afraid. We are trying to ensure we have all the pertinent information about the long-term impacts." The Heiltsuk have played a central role in the incident response, but have been denied information from environment officials about what evidence has been gathered on the impact of pollution from the spill.

Mr. Smith, who spent years involved in the negotiations around the land use agreement that protects 85 per cent of the region's old growth forests, said in an interview he is fully supportive of the Heiltsuk's concerns around the spill cleanup.

"I do feel conflicted. Being a Liberal candidate, I want to defend my team I decided to join," Mr. Smith said. But he acknowledged that if the spill had taken place in his community, "I would be screaming bloody murder."

Mr. Smith said he plans to offer his assistance to the Heiltsuk to try to repair the breach between their community and Ms. Clark's Liberal government. "They need a calm voice to come in and say, 'You have an issue, let's talk about it,'" he said. 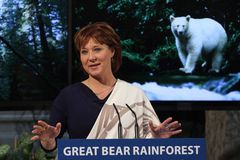 Efforts begin to reposition, raise sunken tug near Bella Bella, B.C.
November 10, 2016
Justin Trudeau reveals plan to protect Canada's coasts from oil spills
November 7, 2016
Follow Justine Hunter on Twitter @justine_hunter
Report an error Editorial code of conduct
Due to technical reasons, we have temporarily removed commenting from our articles. We hope to have this fixed soon. Thank you for your patience. If you are looking to give feedback on our new site, please send it along to feedback@globeandmail.com. If you want to write a letter to the editor, please forward to letters@globeandmail.com.
Comments