But this time, a proposal to create a separated lane on the edge of Chinatown has generated anxiety among the kinds of green, local businesses that Mayor Gregor Robertson frequently touts as the future of the city.

Among them, a grocery store that sells and delivers locally grown produce, a vegan restaurant, and a series of independent stores run by young entrepreneurs.

All of them moved into the block of Union Street just east of Main in the last two years, seeing the somewhat out-of-the-way street as a place to start fledgling businesses at reasonable rents.

Many are worried that the city's plan – which includes not just the separated bike lane, but also a proposal to remove some street parking – will kill their fragile efforts. "We took a huge risk by coming here and, obviously, we're not making money yet. Even a small change will affect us here," said Kleah Michnik, one of the founders of Charlie & Lee, a hip clothing store mentioned by magazines like Travel + Leisure as a hidden treasure.

At The Board of Trade Co. next door, owner Eunice Quan said the shop doesn't do as well as her other store in Gastown already. "A lot of people still don't want to cross Main. And the closest SkyTrain is a 10- or 15-minute walk."

She said her store works as a destination, mostly for people willing to drive to discover something new.

The proposed changes on Union are part of a major city upgrade to the 20-year-old Adanac/Union bikeway, one of the first established in Vancouver and among its busiest. The city's transportation engineer, Jerry Dobrovolny, pointed out that about 4,000 cyclists a day use it in the summer. The two blocks of Union on either side of Main also get used by about 5,000 trucks a day.

The intersection of Union and Main is one of the top 10 locations for cyclist-motor vehicle crashes. The location has also been fatal for 45 per cent of the pedestrians hit there, according to statistics for 2006-2011.

Mr. Dobrovolny said the city is trying to work with the businesses and has already ditched one idea – making the street one-way – that they were concerned about.

Erin O'Mellin, the executive director of the city's cycling advocacy group HUB, said that those statistics show that "it's really important cyclists have an obvious and designated space to go."

Ms. O'Mellin said her group plans to talk to businesses about how much they can gain from new bike traffic there.

"It brings a whole new market to their neighbourhood."

For some businesses, the bike lane is no big deal. Leon Basin at Shop-Task, an in-line skate store, said the store's customers will find their way there no matter what.

But the concerned group is not so easily persuaded about the "cyclists will buy your stuff" message.

"We've been trying to cater to the cyclists, because that's who's going by our stores every day. But cyclists are only now starting to realize there's something on that block," Mike Leung said.

He owns the space that houses Harvest Community Foods, which sells soups and local produce in its store as well as delivering boxes of produce through a system called Community Supported Agriculture where people prepay for a share of a local producer's crops.

Like others, Mr. Leung said the main problem on the route is the intersection of Union and Main, not the whole street. He said if the signage were improved and if traffic were blocked on Union west of Main, as the city is planning, that would likely solve most of the issues.

Devon Skuban lives in a condo above the store and cycles regularly to his job in Gastown, so he thinks he understands the need for safe cycling.

But, he said, the changes being proposed by the city are too drastic for the fledgling businesses on the street.

"We are the revitalization," Mr. Skuban said. "Businesses need to develop here."

Vancouver seeks feedback on west side pathway
May 16, 2013 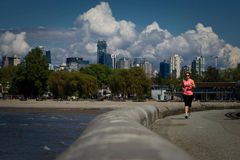 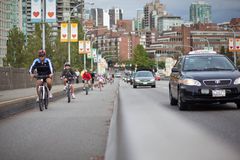 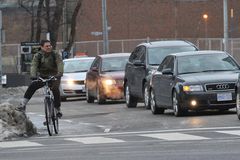 Resentment of the rich a roadblock to Point Grey bike route
February 27, 2013 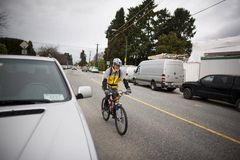