First the salmon vanished, now the bears may be gone too.

Reports from conservationists, salmon-stream walkers and ecotourism guides all along British Columbia's wild central coast indicate a collapse of salmon runs has triggered widespread death from starvation of black and grizzly bears. Those guides are on the front lines of what they say is an unfolding ecological disaster that is so new that it has not been documented by biologists.

"I've never experienced anything like this. There has been a huge drop in the number of bears we see," said Doug Neasloss, a bear-viewing guide with the Kitasoo-Xaixais tribes in Klemtu, about 180 kilometres south of Kitimat.

Mr. Neasloss said in recent weeks that he and other guides have visited 16 rivers where they usually encounter groups of bears feeding on spawning salmon.

"I've been doing this for 11 years and this is the worst I've seen it," he said. "Last year on the Mussel River, I saw 27 bears. This year it's six. That's an indication of what it's like everywhere."

"This year, there are three black bears and no white bears," he said.

Mr. Neasloss said for several years salmon runs have been in decline in the area, but last year was particularly bad.

"I've never seen bears hungry in the fall before, but last year, they were starving," he said. "I noticed in the spring there weren't as many bears coming out, but I felt it was premature to jump to any conclusions. … but now there just aren't any bears. It's scary," he said.

"I think a lot are dead. I think they died in their dens [last winter]" he said.

"I've talked to stream walkers [who monitor salmon runs]who have been out for a month and have yet to see any bears," he said. "There are just no bears showing up. I hear that from every stream walker on the coast."

Mr. McAllister said it used to be easy to visit salmon streams in the Great Bear Rainforest, a large area of protected forest on the central coast, and see 20 to 30 bears a day feasting on salmon.

"Now you go out there and there are zero bears. The reports are coming in from Terrace to Cape Caution … the bears are gone," he said.

"And we haven't seen any cubs with mothers. That's the most alarming part of this," Mr. McAllister said.

He said the problem is that chum salmon runs in the area have collapsed.

While there are strong runs of pink salmon into rivers on the central coast, chum, which are much bigger fish that spawn later in the year, are the key food item for bears preparing for hibernation.

Without an adequate supply of big salmon late in the year, said Mr. McAllister, bears do not have enough fat to survive the winter in their dens.

"The lack of salmon last fall, coupled with a long, cold winter, is what's at the root of this," he said.

"River systems that in the past had 50,000 to 60,000 chum have now got 10 fish," he said. "The chum runs have been fished out. We've seen the biological extinction of a [salmon]species, and now we're seeing the impact on bears."

Fred Seiler, with Silvertip Ecotours, in Terrace, said the Department of Fisheries and Oceans should not allow salmon to be commercially harvested in areas where stocks are in trouble.

"This should be a huge red flag for DFO … but they continue to manage British Columbia's salmon fishery in a total state of denial," he said. "Even as we speak, they are still considering more [salmon fishing]openings when not enough fish have returned to the rivers.

In a joint statement, Mr. McAllister, Mr. Seiler and Mr. Neasloss called on the government to close all chum-salmon fisheries and cancel the fall grizzly-bear hunt.

The worst salmon disaster this year has been on the Fraser River, on the south coast, where 10.6 million sockeye were expected, but only about 1.6 million returned.

"The collapse of the Fraser sockeye and now the north-coast chum salmon runs is leading to ecological collapse of our coast ecosystems," said Mr. McAllister. 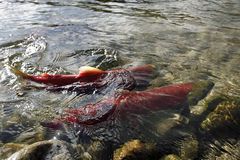