The National Energy Board has been asked to stop Kinder Morgan from promising to dole out millions of dollars in benefits to communities along the route of the proposed Trans Mountain pipeline expansion.

A non-profit concerned about how the oil-pipeline project might affect water quality has filed a motion with the NEB objecting to financial agreements between the Kinder Morgan subsidiary Trans Mountain and communities that are participating in the board's hearings on whether to approve the project.

The company has signed memorandums of understanding agreeing to pay more than $5-million to about 16 communities in British Columbia and Alberta. Trans Mountain says the CBAs are simply meant to compensate communities for the disruption of pipeline construction. The money would be paid only if the proposed project, which would double the capacity of an existing pipeline, goes ahead.

Mr. Stephen argues that Trans Mountain should not be allowed to promise payments because that could influence the position those communities take in the hearings.

"The thing that comes to mind right away for people is that it sounds like a bribe," Mr. Stephen said. "It certainly leaves room for the question: 'Did that money influence their participation?' And our view is that there shouldn't be room for that question to come up. Whether or not the money actually had any influence, people shouldn't be left wondering, and so we put a motion in to the NEB."

The motion asks the NEB "to compel Trans Mountain to cease and desist from negotiation of Trans Mountain Community Benefits Program Agreements with commenters or intervenors in the hearing, and to make null and void any such agreements already made."

Trans Mountain has not yet filed a reply, but company spokesperson Lisa Clement said the CBAs are not an attempt to buy influence.

She said Trans Mountain does not require the communities to support the proposal.

Ms. Clement said when a community signs an agreement, "that doesn't necessarily mean that they are entirely supportive of the project – what it does mean is that we've been able to reach an agreement and an understanding," on what compensation would be fair if construction takes place.

Trans Mountain has already agreed to pay $500,000 to the District of Hope for improvements to a park; $700,000 to the City of Kamloops for beautification of a road corridor linking the airport to downtown, and $845,000 to the Thompson Nicola Regional District for upgrades to parks, trails and drinking-water infrastructure.

"We have to date signed community benefits with a number of communities basically from Edmonton all the way to Hope," Ms. Clement said. "We're in discussion right now with communities in the Lower Mainland, so most of the communities in the Interior have agreed upon these CBAs."

Some, such as Thompson Nicola and the District of Barrier, have issued statements of support for the pipeline project.

The City of Chilliwack recently rejected a proposed $800,000 CBA, with some councillors saying a deal would be premature and could give Trans Mountain unfair "leverage" with the energy board. The Metro Vancouver Regional District last month voted to oppose the project and has not negotiated any CBAs with Trans Mountain.

Tara O'Donovan, a spokesperson for the energy board, said Trans Mountain has until next week to respond to the motion.

Trans Mountain pipeline expansion would be ‘disastrous’: Vancouver mayor
May 27, 2015 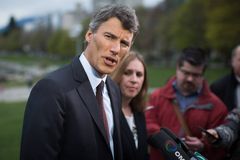