The rich plant life that once sat at the bottom of Halkett Bay, north of Vancouver at the mouth of Howe Sound, became suffocated when a booming logging industry moved into the area, littering the sea floor.

Once the plants were gone, so was the marine life, explains Howard Robins, the president of a group with an ambitious plan to sink a 111-metre decommissioned Canadian warship as an artificial reef.

It's hoped once the ship reaches the bottom of the cove, it will become home to plant life and eventually aquatic animals such as cod and anemones.

"It makes sense to put a ship in an area that has already been devastated by man so that we can recoup some value," said Mr. Robins, president of the Artificial Reef Society of British Columbia.

The society has spent years cleaning and stripping the HMCS Annapolis, a retired five-decade-old vessel, to get it ready to sink in the bay.

Sinking the ship would also be a boon for underwater divers. The artificial reef society has been sinking wrecks for decades, creating scuba diving sites along the province's coasts.

"I think it would be a fantastic thing for the tourism industry," said Kevin Breckman, the owner Sea Dragon Dive Charters who was also involved in preparing the ship for sinking.

"It's a growing sport in British Columbia."

The Annapolis, which the reef society purchased in 2008, was built in the 1960s. It patrolled Canada's coasts during the Cold War years with its crew of 212. It was designed for anti-submarine warfare but performed a wide variety of tasks, including fisheries enforcement. It never saw combat.

Instead, its biggest battle has been the debate of when and where it should be sent to the bottom. The sinking was planned for 2010, but the project has been repeatedly postponed.

Residents of Halkett Bay have opposed the project based on environmental concerns.

"PCBs exist in the insulation material of the ship," said Mr. Robins. "We have to deal with this."

PCBs, also known as polychlorinated biphenyls, are industrial chemicals associated with the manufacturing of electrical equipment and are classified by Environment Canada as a major pollutant.

The reef society is working with the agency to have the insulation of the ship removed, Mr. Robins said. The agency has green-lighted the sinking of the ship at Halkett Bay on the condition that environmental standards are met, he said.

The lack of progress has frustrated some.

"Something has gone awry on this one, in terms of the timeline to get it down," said Tom Beasley, a former member of the artificial reef group, who is now with the Underwater Council of British Columbia, a society representing scuba divers.

The ship is the subject of a Federal Court lawsuit. WR Marine Services says it is owed nearly $100,000 for stripping and mooring the vessel.

Mr. Robins said a rough economy is the main cause of cash problems.

The beginning of the project coincided with the 2008 market recessions, and the value of scrap metal, the project's main source of income fell, he said.

Still, that hasn't stopped critics from demanding a change in plans and leadership.

A memorandum from the underwater council states Wes Roots, the owner of WR Marine Services, will waive his claim on several conditions.

Among them are that the sinking site of the Annapolis is changed and that the Artificial Reef Society of B.C.'s board of directors becomes supported by the local diving community and industry.

The board of the reef society faces a motion of non-confidence from the underwater council, Mr. Beasley said.

The council will meet later this month to discuss Mr. Roots's conditions.

Until then, it's unclear when, if ever, the bottom of Halkett Bay turns into a reef.

How Howard Robins is helping a reef to overcome its great barriers
September 16, 2012 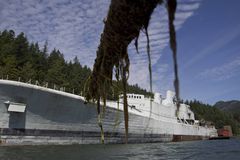 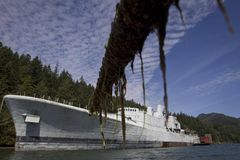 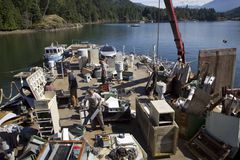 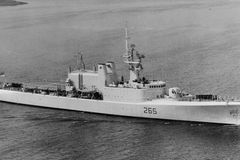 Military's decision to scrap historic ship provokes legal broadside
August 30, 2010
Plan to sink ex-warship to bottom of Howe Sound takes a hit
April 21, 2010
Church moves to sink reef project
October 12, 2009
Plan to sink old warship draws fire
June 25, 2009
Report an error
Due to technical reasons, we have temporarily removed commenting from our articles. We hope to have this fixed soon. Thank you for your patience. If you are looking to give feedback on our new site, please send it along to feedback@globeandmail.com. If you want to write a letter to the editor, please forward to letters@globeandmail.com.
Comments