Joshua Welsh wasn't looking for woodworking lessons when he signed up with Vancouver's innovative CityStudio program, but rather to help Vancouver become the world's greenest city by 2020.

Yet the landscape architecture student happily leaves the program's first semester having helped build a 10-metre table from a Douglas fir tree that the parks board served up for the students' needs.

Professors Janet Moore and Duane Elverum, of Simon Fraser University and Emily Carr University, respectively, pitched CityStudio last fall as a means of rallying students from six postsecondary institutions across the Lower Mainland to pitch in with Vancouver's greenest-city goals. Twenty students applied for a pilot fall semester – a six-credit program over six hours a week, in addition to ongoing studies at their home institutions. Fourteen were accepted.

The idea, partnering the city, Vancouver Economic Commission and the schools, was to bring student thinking to real-world projects in sustainability – a combo that led to various efforts, including work on a city app to help map sources of produce in the Mount Pleasant area. But Ms. Moore makes particular reference to the table when asked about those projects.

It came about when Mr. Welsh, 33, and four other students thought of a means of focusing community discussions on the greenest-city effort.

The table, which can be split into three sections, is to be transported for the "Long Table Series" of talks about greenest-city goals. It will have its debut on Saturday at CityStudio's headquarters in a city building on Spyglass Place.

"We saw, still, a disconnect between high-level goals and everyday people who wanted to be involved, but weren't quite sure how because of the high-level nature of certain goals," Mr. Welsh said.

Someone raised the idea of longhouses as a gathering place, which sparked brainstorming. "We thought that by building a physical table that can be taken down and moved to wherever we needed it to be – community centres or specific neighborhoods or parks – we could help bring these goals and practical ideas around these goals to the community," he said.

"The city identified a great need to have that connection with the community stakeholders. We thought this physical vessel of meeting around a table would help facilitate that."

Fellow student Laura Kozak, a 28-year-old University of British Columbia architecture student, said the parks board offered a tree from a small park at Oak and 37th Avenue, which was already slated for removal, making this a sustainable initiative.

Ms. Moore says she and Mr. Elverum came up with the idea of the program and presented it, in October, 2010, to a panel that included Mayor Gregor Robertson "It was like Dragon's Den," she recalls. "We just said students have the energy, optimism and tools to help solve these complex problems."

Mr. Robertson agreed. "I loved the idea," he said. "Students bring enormous brainpower and passion to the table and are seeking job opportunities in the emerging green economy, so this connects the dots."

He also likes the table. "It's a great symbol of a breakthrough approach to new ideas," he said.

The program is costing about $160,000 for one year, with one-third from the postsecondary institutions, and two-thirds from the city.

Mr. Welsh spent last summer working on a similar partnership program between UBC and the city, but it was more research focused, and he was looking for more practical experience. "This is going on my CV or in my portfolio," he said. "That's the beauty of CityStudio. There is rarely this crossover between real-world applications and the big idea that can take seed at university levels."

A spring semester, with 20 students, starts in January. 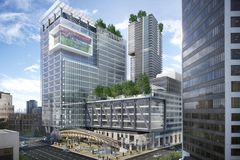 Environmentalists skeptical of Loblaw's boost for salmon farming
February 1, 2011
Follow Ian Bailey on Twitter @ianabailey
Report an error Editorial code of conduct
Due to technical reasons, we have temporarily removed commenting from our articles. We hope to have this fixed soon. Thank you for your patience. If you are looking to give feedback on our new site, please send it along to feedback@globeandmail.com. If you want to write a letter to the editor, please forward to letters@globeandmail.com.
Comments