Before Adrian Dix, Mike Harcourt was the last B.C. NDP leader to head into a provincial election with a big lead. That was in 1991, and Mr. Harcourt, a one-time popular mayor in Vancouver, led his party to a healthy majority.

Mr. Dix, as we know, was not so fortunate.

Until now, Mr. Harcourt has held his fire about what happened during the spring campaign. Since retiring from politics, he has been reluctant to meddle in NDP affairs or offer his views on what the party needs to do to regain power.

But in an interview this week, he could no longer bite his tongue: "They need a new leader," Mr. Harcourt told me.

The former premier said it was difficult to watch the campaign that Mr. Dix waged, blowing a 20-point lead and getting badly beaten by the governing Liberals. Like many, Mr. Harcourt believes the turning point occurred early on, when Mr. Dix reversed his position on the proposed expansion of the Kinder Morgan pipeline, coming out staunchly against it. Until then, the NDP leader had said he was going to wait until he had seen the company's full proposal later this year before taking a final position.

"That one remark cost them 20 seats," Mr. Harcourt said. "… I knew right away it was a huge, huge mistake."

Mr. Harcourt is one of a number of past party members and MLAs who have offered frank assessments of what went wrong in May. Ian Waddell and Corky Evans, NDP cabinet ministers in the 1990s, recently blasted the party's election strategy.

"Forced to reflect," Mr. Waddell said in a piece for The Tyee, "NDP members and supporters are starting to own up to their mistakes. Eventually, they will conclude that we defeated ourselves. Yes, Christy Clark fought a great campaign. But, in the end, we literally gave her the victory."

While Mr. Waddell did not offer an opinion on whether Mr. Dix should go, Mr. Evans did not hesitate in a letter getting wide circulation among New Democrats.

"Of course Adrian must go," the former NDP health minister wrote. "His image has been damaged by attack ads the same way [Stéphane] Dion and [Michael] Ignatieff were damaged by similar smear campaigns."

They were both fine people and they both had to leave so that their party could move on. So must Adrian."

Summing up the NDP's broader issues in B.C., Mr. Evans said: "The only way I can think of to describe our problems is to say the movement that we were has become the institution that we are."

Mr. Harcourt, for one, believes the party needs to develop the type of political approach that he used to cruise to victory more than two decades ago. That is, with a plan to build a strong economy that also respects the environment.

"That's where the party needs to position itself," he said.

"They need to get a new leader, and that person needs to go out and travel the province for four years like I did."

Mr. Dix has offered few hints about his future. In the immediate days after the election, the NDP leader confessed in an interview with The Globe and Mail to being emotionally shattered by the result. But he also sounded like someone who wanted another shot at the Liberals.

Since then, most New Democrats who have been brave enough to offer an opinion on the subject have suggested the leader has to go. It is widely believed that he has been successfully defined by the Liberals as a socially uncomfortable policy wonk lacking the backbone, and concern for the economy, to lead a province. Compounding his problems is the fact he is no match for someone with the extraordinary campaign skills of Ms. Clark.

Increasingly, it would appear Mr. Dix's days as NDP leader are becoming fewer.

Vancouver’s Grouse Mountain is a grind – but not deadly
August 19, 2013 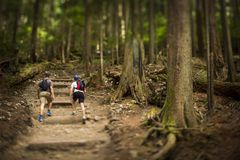