The B.C government is hiking Medical Services Plan premiums and tobacco taxes to help cover the cost of a $1.3-billion increase in health-care spending over the next three years.

Finance Minister Mike de Jong announced the measures on Tuesday in the provincial budget, noting that health care has the "biggest budgetary appetite" among government priorities.

By 2016-2017, the minister said, health costs including services provided by ministries outside the health ministry will reach $19.6-billion or 42 per cent of government expenses. Spending by the health ministry alone is projected to reach $17.9-billion.

Measures announced on Tuesday include a four per cent increase in MSP premiums as of Jan. 1, 2015 – about $5.50 per month for a family of three or more.

In another move, the government is raising taxes on cigarettes by 32 cents per pack or $3.20 a carton, generating $50-million in annual revenue that will largely be spent on cancer-reduction programs including joint efforts with the Canadian Cancer Society.

Projected growth in health-care spending over the coming three years will be 2.6 per cent a year, which budget documents noted is "slightly higher" than the 2.5 per cent projected in the budget of June, 2013.

The difference between the two figures is about $16-million, a health ministry official said on background.

Mr. de Jong and his predecessor, Kevin Falcon, previously have made much of seeking to hold increases in health-care spending.

During a budget lockup news conference, Mr. de Jong said the growth rate in health spending was less than increases of up to six per cent that were more common earlier in the 13 years that the Liberals have been governing B.C.

Also, he took aim at the Canada Health Transfer. In 2011, the federal Conservative government unveiled long-term funding for health and social transfers, presenting a multibillion-dollar spending plan that is to run through to 2024. The B.C. government has said the approach does not acknowledge the province's aging population or its push to control health-care costs.

"That does not operate in a way that is favourable to B.C.," he said.

Mr. de Jong said he had no preferred target in the growth of health-care spending, noting he would have to draw money from other budget priorities to hit such goals.

"I am probably more interested in the shifts that can take place within the budget around preventive health care," he said.

The Liberal government praised the province's health care under its management, touting B.C. as a leader in important health outcomes. Also, in 2013, the province ranked second on a list of the least costly jurisdictions in per capita health-care spending.

Mike Farnworth, the B.C. New Democrats' finance critic, noted MSP premiums will cost families $400 over three years, along with other costs, including hydro and ferry rates, that are applying pressure on families. 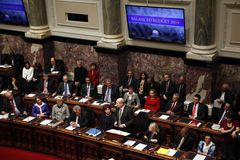 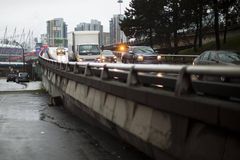