When the Supreme Court of Canada looked at a case involving two Heiltsuk First Nation men who were charged with illegally trying to sell herring eggs, the documents examined included an entry in Alexander Mackenzie's journal.

"The Indians who had caused us so much alarm, we now discovered to be inhabitants of the islands, and traders in various articles, such as cedar-bark, prepared to be wove into mats, fish-spawn, copper, iron and beads, the latter which they get on their coast," he wrote in 1793, shortly after reaching the Pacific on his epic overland trek across Canada.

The court also saw an entry in the journal of Dr. William Tolmie, a fur trader who in 1834 wrote: "From 15 to 20 large canoes of Wacash's people passed on their way to Caughquil country – the canoes were laden with boxes, hampers and filled with dried herring spawn, which they are to barter for Oolaghens."

The "fish spawn" those early observers wrote about were herring eggs that the Heiltsuk and other First Nations have been harvesting on the B.C. coast for about 10,000 years.

The methods they use have changed little over the centuries. They wait until the herring lay their eggs on kelp, and then they harvest the long fronds of seaweed covered with clusters of tiny, glistening eggs.

The traditional native harvest is supposed to take priority over the commercial fishery, but in practice, the commercial boats are allowed to scoop up the herring before they get into the shallows to spawn.

"The way they fish takes away the fish totally from the ecosystem and affects the biomass because they actually kill the fish during their harvesting," Carrie Humchitt, legal services co-ordinator for the Heiltsuk said in a recent interview. "They break the fish in half and squeeze out the eggs. The rest of the fish is used for cat food, dog food and fertilizer. With ours, we hang kelp in the water and the fish swim around the kelp and lay their eggs on it. Then we harvest the kelp. We don't touch the fish at all. So that's the difference … theirs is a kill fishery and ours isn't."

But the traditional fishing the Heiltsuk practice has become increasingly difficult because the Department of Fisheries and Oceans has allowed the commercial fleet to overharvest herring in many areas, causing stock collapses that have led to total fishing bans.

From 2006 until 2014, herring fishing was closed on the central coast. When DFO allowed a commercial harvest there last year it sparked protests by First Nations because they didn't think stocks had adequately recovered. Those protests became even more intense this spring, when the commercial fleet returned.

The Heiltsuk occupied DFO offices near Bella Bella and threatened a "war on the water" if the commercial boats dropped their nets. In the end, the seine fleet got a brief opening, scooping up 690 tonnes before Heiltsuk boats arrived. But the gill-net fleet, which was set to fish later, was forced to sail away without taking any herring as the Heiltsuk protest intensified.

Ms. Humchitt said there was a lot of celebrating in Bella Bella when the commercial fleet finally pulled out, but now the Heiltsuk are worried about what will happen next spring, when the herring return to spawn. She said the Heiltsuk and DFO have agreed to work together to manage the herring fishery, but the First Nations are worried that the government won't follow through.

She said the Heiltsuk goal is to see herring stocks rebuilt to a level that will sustain both First Nation and commercial fisheries.

But that may mean an end to commercial methods that kill spawning fish.

If the objective is to get the eggs, which are highly valued in Japan, then why not use the aboriginal method? It makes more sense to take eggs on kelp and let the fish live to spawn again.

That kind of fishing was supporting a lucrative trade on the coast when the first European explorers arrived. It should be allowed to do so again. 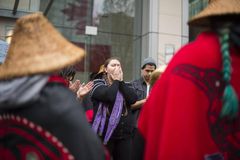 B.C.'s Heiltsuk Nation vows to interfere in herring fishery if boats return
Follow Mark Hume on Twitter @markhumeglobe
Report an error Editorial code of conduct
Due to technical reasons, we have temporarily removed commenting from our articles. We hope to have this fixed soon. Thank you for your patience. If you are looking to give feedback on our new site, please send it along to feedback@globeandmail.com. If you want to write a letter to the editor, please forward to letters@globeandmail.com.
Comments